Sightseeing in Dugi Otok - what to see. Complete travel guide 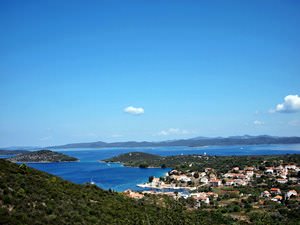 Dugi Otok is one of the most beautiful and incredibly interesting in terms of excursions Croatian islands. It is annually visited by thousands of amateurs of beach rest, lovers of eco-tourism and fans of hiking in historical places. On the territory of the island lie excellent beaches and modern entertainment centers. However, far greater interest is aroused by natural attractions and unique historical sites. It is also worth noting, that Dugi Otok is the largest island in central Dalmatia and has an unofficial name Long Island. Its length is 45 kilometers, while the width does not exceed five kilometers.
Best beaches and recreation areas around Dugi Otok
The Dugi Otok Island will not disappoint people who prefer a beach rest. It has a magnificent sandy and pebble beaches. Several areas are exclusively attractive for divers. The Naturist …

Open
The main symbol of the island is a unique Telascica Nature Park. It occupies the southern part of the island and includes 13 nearby uninhabited islets. In the park, is a fabulously beautiful bay with the same name, whereas, coastal rocks are considered its main value. They have become home to hundreds of species of birds. A huge number of curious travellers come to admire these picturesque places every day. On the territory of the park, you can also find the salt lake Mir, which became known due to the healing properties of the mud.
A significant part of a tour program are walks in picturesque places. Lovers of excursions should definitely admire local karst caves. The largest of them is the cave of Strashna Pech, which was discovered relatively recently, in 1898. The name of the cave was not accidental. It is distinguished by a rather gloomy and frightening atmosphere. Copyright www.orangesmile.com
Top hotels in Dugi Otok for business trip or short vacation
The guests of the island can locate in attractive hotels. All of them differ from each other with their decent choice of rooms and excellent technical equipment. On the picturesque coast …

Open
As for the architectural sights, the Veli Rat lighthouse is the undoubted leader among them. It is the largest lighthouse in the Adriatic, with a height of 42 meters. Considering the fact, that the lighthouse was built more than one and a half centuries ago and is successfully serving its purpose, its scale seems even more impressive and deserving admiration. 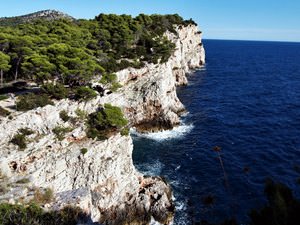 In the city of Sali, there is one of the most significant religious attractions of the island - the Cathedral of the Assumption of the Virgin Mary. The first church in its place was built in the 9th century, and the construction of the temple, which can be seen today, began in 1465. Church of St. Pelegrin, located in the city of Savares, is the oldest building on the island. The exact date of its construction remains unknown, but many scientists believe that it was built long before the 9th century. Lovers of history should definitely stroll through the major cities of the island. A picturesque city of Sali is its capital. Here, you will meet a lot of beautiful buildings and symbolic monuments, each of which has a unique history.
Cuisine of Dugi Otok for gourmet with top restaurants and cafe
Dugi Otok's cuisine is very close to Italian with some national characteristics. Fish and seafood are the basis of most national dishes in this region of the country. Spices give a special …

Open
Walking tours to the most picturesque natural landmarks of Dugi Otok and exploring unique historical places of interest remains the main entertainment for tourists. In summer, fans of beach recreation make up the majority of visitors to the island. Many of them are attracted by the miraculously beautiful Sakarun Beach. Water at this beach changes its color depending on the sunlight. Tiny white stones add special charm to this coastal area. Dense pine forests grow not far from the beach, so there is no wonder why the bay is recognized as the most beautiful area on the island. 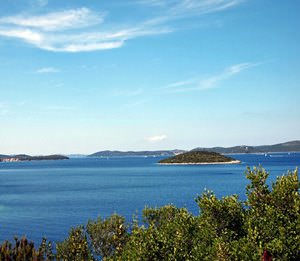 Sakarun Beach is shallow, so it is perfectly suitable for beachside recreation. During the peak summer season, numerous cafes and bars are open in its territory. If you want to relax in a more private and secluded atmosphere, consider visiting such beaches as Soliscica and Pantera. They are considered less crowded.
Excursion over cultural sights of Dugi Otok - 'must visit' points of interest
Dugi Otok Island is the most beautiful place in Croatia. You can make a variety of excursions here. Both fans of natural beauty and fans of cultural recreation will find a lot of interesting …

Open
Asinus donkeys remain one of the main symbols of the island. There are several farms that breed these cute animals. As these farms are open to visitors, there are always many tourists with children. Attendees can learn how to take care of the animals, and children are even allowed to ride the calmest donkeys. Finally, all these farms are located in incredibly beautiful places. 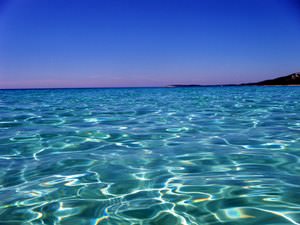 Despite the fact that every year more and more tourists visit Dugi Otok, it hasn’t turned into a classical tourist resort. The national cuisine is still dominating in the menus of local cafes and restaurants, and vendors in markets offer primarily Croatian goods. Even larger settlements and towns maintain their usual lifestyle. The most important is that the island manages to keep its inimitable natural charm. The majority of travelers visit Dugi Otok in summer, but if beach recreation is not your top priority, it will be incredibly interesting to visit this lovely island in spring and autumn.

This guide to iconic landmarks and sights of Dugi Otok is protected by the copyright law. You can re-publish this content with mandatory attribution: direct and active hyperlink to www.orangesmile.com.
Dugi Otok - guide chapters 1 2 3 4 5 6 7

City tours, excursions and tickets in Dugi Otok and surroundings

Survived castles around Dugi Otok
♥   Castle 'Vrana Castle' , 57.2 km from the center. On the map

National and city parks around Dugi Otok
♥   Nature Park 'Telašćica' , 34.7 km from the center. On the map

Search touristic sites on the map of Dugi Otok

Sightseeing in regions nearby Dugi Otok

Zadar
Besides traditional walks on shops, resting on the beach or sports entertainments, Zadar offers its visitors wide choice of excursions. The most large-scale architectural complex of the city is the ancient Roman Forum built in the 1st century AD. Nearby the forum you can see several ancient columns, the ruins of temples and Church of Saint Donatus that has been built later. ... Open »
Pag Island
Novalja Town is the second biggest on the island. That’s also very interesting place to visit. The most popular there is town museum housing very interesting and rich collection, where there are unique archeological objects, ethnographic collections and objects of arts. That’s the perfect place for a family excursion. Nature lovers should visit charming Lun village known ... Open »
Losinj Island
Fans of excursions are sure to visit the ancient town of Osorio that can be called a real open-air museum without a share of doubt. The territory of the town has the incredibly amazing architectural complex. During a walk through the winding streets, guests can see the ruins of ancient buildings and the old fort, many religious buildings of different eras, and the ruins of the ... Open »
Murter
You must certainly come to the capital of the island - the city of Murter. There are ruins of ancient settlements also there. Speaking of Murter's interesting natural attractions, we should mention Raduch Mountain, which the highest point of the flat island. The height of the mountain is only 120 meters, so the ascent to its top promises to be easy and incredibly interesting. ... Open »
Cres
One of the island's main historical values are the so-called written records - slabs and boulders, with ancient Glagolitic inscriptions on them. The most famous of them is the Boulder plate, which has an 11th-century-old inscription. A lot of similar monuments have been found in the immediate vicinity of the capital, as well as in the ancient village of Boulder. Nowadays, ... Open »
Krk
The cultural and historical center of the island is its capital, the city of Krk. At the center of the city there is Vela Plaza, which is surrounded by tall hills; curious ones may see houses of locals on their slopes. The city was the Roman Forum in the Middle Ages. The council, town hall and a beautiful stone well were built in that era. Among the religious sites the ... Open »

All about Dugi Otok, Croatia - sightseeings, attractions, touristic spots, architecture, history, culture and cuisine. Prepare your trip together with OrangeSmile.com - find out the 'must see' things in Dugi Otok, which places to visit, which excursions to take, where the breathtaking views are waiting for you. Planning your trip with this travel guide will help your to get the most out of Dugi Otok in few days.