Sightseeing in Losinj Island - what to see. Complete travel guide 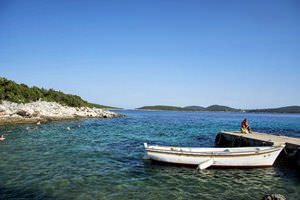 Croatian island of Losinj many years remains one of the most attractive tourist centers in the country. Here is everything you need for a full and exciting holiday, including unique nature reserves, beaches, an abundance of historical sites and entertainment options usual for modern resorts. Losinj is located in close proximity to the large island of Cres that is also well-known to modern tourists; the islands are interconnected by a drawbridge.
Your active city break in Losinj Island. Attractions, recreation and entertainment - best places to spend your day and night here
Every year, Losinj attracts fans of active leisure. This is not surprising, as here, in fact, you can not only lay on the beach and swim but also explore many attractions and do your …

Open
Many of island’s guests prefer to start acquaintance with its history and culture with a walk along the picturesque waterfront. Along the coast there is a huge number of popular hotels, restaurants and travel agencies, so you can sign up for another tour around the island or sea voyage. Virtually every city on the island has preserved ancient churches and cathedrals, as well as original residential buildings and monuments whose age is more than one hundred years.
Fritz Gallery situated in the town of Mali Losinj is certainly worth mentioning among cultural sights. Works by famous Croatian and European painters donated to the Art Gallery by prominent collectors are represented there. Copyright www.orangesmile.com
Best beaches and recreation areas around Losinj Island
Losinj safely be called one of the most attractive beach resorts in the country. It’s difficult to describe the beauty of the coast. Thick pine forests loom close to the coastline. One …

Open
The history of the beautiful island is inextricably associated with sea, and locals continue to regard sea as their primary mean of livelihood. Hereditary families of sailors and fishermen live on the island of Losinj. You can learn a lot of interesting things about fishing during a tour to the Museum of Kula. It’s situated in the town of Veli Losinj and holds a rich and diverse collection of exhibits associated with the sea in one way or another. The museum often hosts interesting art exhibitions and special events. 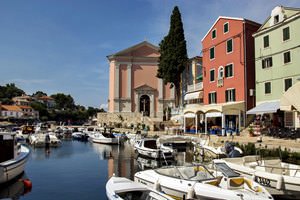 The most famous and symbolic sculpture of the island is Apoksiomen

. It was found during the study of coastal waters; it proves that the first settlements on the territory of Losinj appeared in the prehistoric age. The statue of athlete dates back to ancient Greece. According to scientists, the island was rapidly developing at that time. You can see the priceless discovery in the museum in Mali Losinj.
Top hotels in Losinj Island for business trip or short vacation
A choice of attractive accommodation places on the island is more than decent. Numerous popular hotels are concentrated in Mali Losinj and Veli Losinj, but you can easily find nice hotels …

Open
Fans of excursions are sure to visit the ancient town of Osorio that can be called a real open-air museum without a share of doubt. The territory of the town has the incredibly amazing architectural complex. During a walk through the winding streets, guests can see the ruins of ancient buildings and the old fort, many religious buildings of different eras, and the ruins of the oldest Christian church on the island. Lovely villas of colonial times and fabulously beautiful parks, manicured gardens and alleys make the town special for leisurely walks. It’s also worth noting that the town is a regular venue for the colorful festival Musicales Osorio that is very popular among tourists. 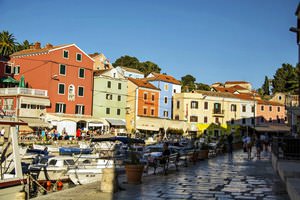 One should pay attention to the natural attractions of Losinj. The highest point of the island is Televrina Mount. The picturesque Cikat Bay with its nature reserve is situated to the south. The area near the island is inhabited by a colony of rare dolphins remaining the undisputed symbol of Losinj. Every day trips to the most comfortable sites to observe animals are arranged for tourists.
Shopping in Losinj Island - main shopping streets, outlets and boutiques
Losinj, like the vast majority of the islands, doesn’t have large shopping centers or a huge variety of brand accessories, clothes, and shoes. If you want to purchase something of this …

Open
Losinj is widely recognized as a large wellness and health resort. It has unique natural conditions that are perfect for caring about human health. Unique air enriched with minerals is considered the main treasure of the resort. Pinewoods cover a significant part of the island, so a vacation on the island is a nice disease prevention method that can save you from various typical illnesses. Many large hotels in Losinj have their own spa centers, in which they offer various treatments with sea water and various natural ingredients. 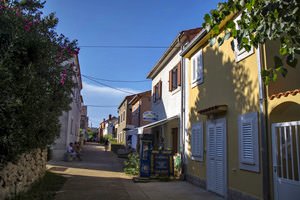 As a wellness resort, the island became popular more than a hundred years ago. Initially, only members of royal families spent their free time there. At the beginning of the 20th century, beautiful parks and gardens appeared on the island, as well as paths for hiking and relaxation areas. Modern tourists can still see many of them. The total length of all paths for hiking on the island is more than 200 kilometers. Losinj has perfect conditions for active recreation – guests of the island will have a fantastic opportunity to try different water-based sports, enjoy cycling tours, or attend modern sports centers.

This guide to iconic landmarks and sights of Losinj Island is protected by the copyright law. You can re-publish this content with mandatory attribution: direct and active hyperlink to www.orangesmile.com.
Losinj Island - guide chapters 1 2 3 4 5 6 7 8 9

National and city parks around Losinj Island
♥   Forest Park 'Čikat' , 5.8 km from the center. On the map

Sights around Losinj Island from our guide 'Extreme places on Earth'

Distance from Losinj Island center - 57.4 km.
The reconstruction has been supervised by the world-famous architect Pietro Nobile. By 1932 the amphitheater has been fully prepared for large-scale events. Currently, the theater has 5000 seats. Visitors will have an opportunity to diversify the rest with a lot of interesting events. They can stroll through the underground rooms of the amphitheater, as well as look into the archaeological museum located on its territory. During the reconstruction of the arena, scientists discovered many unique artifacts that make up the museum's exposition. … Read further

Search touristic sites on the map of Losinj Island

Sightseeing in regions nearby Losinj Island

Rab Island
Art-lovers won't be bored too; they have to visit the island's capital in summer. The fact is that in summer the town streets resemble a large-scale art gallery and artists from all over the world come there looking for inspiration. The capital's archaeological area is not the only one on the island. Fans of exploring historical sites are recommended to visit the village of ... Open »
Pag Island
Island of Pag is the one of the most famous resorts of Croatia; it’s extremely popular among both local citizens and foreign tourists. Local cheese and crafty laces hand made by local craftsmen and cheesemongers are true symbols of the island. Tourists visit Pag all over the year. In summer time it's popular among fans of beach vacations and hiking, while in winter months ... Open »
Cres
Cres is Croatia's second largest island, which is known as a major center of ecotourism and a location of incredibly beautiful beach resorts. The beautiful island managed to preserve its unique natural splendour. Its guests have an excellent opportunity to combine hiking to picturesque places with beach activities. You won't find big noisy resorts, large-scale hotels, crowded ... Open »
Krk
The cultural and historical center of the island is its capital, the city of Krk. At the center of the city there is Vela Plaza, which is surrounded by tall hills; curious ones may see houses of locals on their slopes. The city was the Roman Forum in the Middle Ages. The council, town hall and a beautiful stone well were built in that era. Among the religious sites the ... Open »
Pula
The city was founded by ancient Greeks and it has become one of the most important and largest cities of Istria thanks to its advantageous location. In Roman times Pula experienced years of rapid expansion. Many sights and places of interest have left since that time. They remind of the power and importance of this city. During its history Pula has changed its owners several ... Open »
Dugi Otok
In the city of Sali, there is one of the most significant religious attractions of the island - the Cathedral of the Assumption of the Virgin Mary. The first church in its place was built in the 9th century, and the construction of the temple, which can be seen today, began in 1465. Church of St. Pelegrin, located in the city of Savares, is the oldest building on the island. ... Open »

All about Losinj Island, Croatia - sightseeings, attractions, touristic spots, architecture, history, culture and cuisine. Prepare your trip together with OrangeSmile.com - find out the 'must see' things in Losinj Island, which places to visit, which excursions to take, where the breathtaking views are waiting for you. Planning your trip with this travel guide will help your to get the most out of Losinj Island in few days.