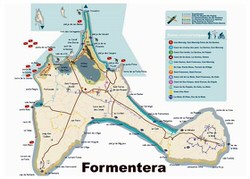 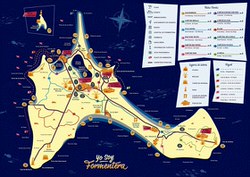 Interactive maps of hiking and biking routes around Formentera

1. You can zoom in/out using your mouse wheel, as well as move the map of Formentera with your mouse.
2. This interactive map presents two modes: 'Biking Routes' and 'Hiking Routes'. Use the '+' button on the map to switch between them.

This Formentera map has two modes: 'Railway Network' and 'Landscape & Rural Map'. Use the '+' button on the map to navigate.

City tours, excursions and tickets in Formentera and surroundings

Our guide to Formentera

The charming village of Savina can boast the attractive hotel Formentera Mar La Marina that will please fans of various activities. It’s ready to offer guests fully equipped apartments and studios decorated in classic traditional style. Hotel guests will appreciate technical equipment of rooms, as well as its pleasant restaurant. There is a huge selection of shops and restaurants, as well as amazing beaches and … Open

Interesting archaeological areas are also found on the island. Researchers discovered unique megalithic 4000-years-old structures at Cape Barbaria. Today, the public has free access to the territory of the archaeological area and admire the fragments of prehistoric buildings. Excellent conditions for beach recreation and sightseeing tourism are created at the resort. In the port area, you can admire the old … Open

The small sand beach Caló des Morts is also very popular among travelers; its length is about 100 meters. The main value of the beach is pristine natural beauty; there is absolutely no equipment here. There are several interesting natural and religious attractions nearby, so sightseeing will be an excellent way to diversify leisure. The beach of Caló des Moro situated in a small bay is quite unusual; it’s … Open

In order to get acquainted with traditions and culture of local people, visit the ethnological museum that exhibits collections of national costumes, handicrafts and art objects. The majority of restaurants and taverns are located in the port area of the town, La Savina. You can also ride a ferry or a boat here, or rent a fishing boat. Due to the fact there are not many tourists on the island, the beaches and the … Open

Maps of Ibiza
Finally, it is important to describe several popular nightclubs on Ibiza as simply no review of the island would be complete without mentioning its clubs. For example, Privilege is the largest nightclub in the world, as its parties are on par with the size. Relaxation on the beach, discos, and strolls among palm trees – the club’s visitors can enjoy all these and much ... Open »
Maps of Ibiza Island
The best nightlife places are San Antonio, Talamanca, Eivissa, and Playa d’en Bossa. Despite the common stereotype, not only teenagers party here, but active people of different age as well. Do you want to party without leaving your suit? Then Ushuaia, where parties start at 8-9 p.m., is the right place for you. If you do not stay in this hotel, you can reserve a table at ... Open »
Maps of Benidorm
Of course, beaches of Benidorm are a "calling card" of the city. When mentioning the tourist capital of Costa Blanca, its sandy beaches, palm trees, sun loungers, and blue waters of the Mediterranean Sea immediately come to mind. Any of the city's beaches is something unique and perfect, and, arriving in Benidorm, it is worth to visit one of them for exploration and ... Open »
Maps of Palma de Mallorca
The resort of Palma de Mallorca features plenty of shopping centers. Shop-a-holics should take a tour over the Avinguda Jaume III. Close to the city center travelers will find the largest shopping center on the territory of the resort. The Centro Comercial Porto Pi offers its visitors a vast choice of clothing shops and jewelry boutiques, perfume stores as well as a hypermarket ... Open »
Maps of Mallorca
The entertainment centre Golf Fantasia is a real paradise for the whole family. It is located in Palma Nova (South of the island, near the capital of Mallorca). Here you can also find mini Golf, the site is considered to be the best on the island. There is a striking abundance of greenery garden on its territory with magnificent ponds, waterfalls and swimming fish. In Colonia ... Open »
Maps of Alicante
If you are not indifferent to the bullfight, then in the center of the city there is a famous arena for bulls, where incredible performances take place every week. And if you like amusement parks, then be sure to go to Benidorm, here you can have a great time. All the facilities here are created for both adults and children. We also advise you to visit Terra Mitica Park, which ... Open »
OrangeSmile.com - online travel reservation expert providing reliable car rental and hotel booking services. We feature more than 25.000 destinations with 12.000 rental offices and 200.000 hotels worldwide.
Secure Server