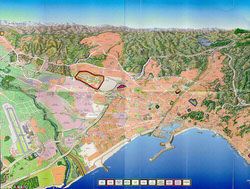 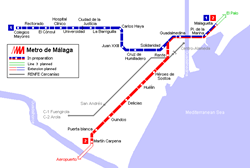 Interactive maps of hiking and biking routes around Malaga

1. You can zoom in/out using your mouse wheel, as well as move the map of Malaga with your mouse.
2. This interactive map presents two modes: 'Biking Routes' and 'Hiking Routes'. Use the '+' button on the map to switch between them.

This Malaga map has two modes: 'Railway Network' and 'Landscape & Rural Map'. Use the '+' button on the map to navigate.

Our guide to Malaga

The restaurant attracts visitors not only with rich choice of the house specialities but with attractive pricing as well. Guests giving preference to meat dishes will get a chance to try some chef’s specialities in the Marisquería Santa Paula restaurant. Healthy diet enthusiasts appreciate the El vegetariano cañadú restaurant. Its spacious light hall is always crowded. For few years of distinguished service … Open

Traditions and mentality of Malaga

The traditional fairs of Malaga also worth special attention, some of them have long acquired the status of important international events. The largest is the fair which is held in August, now it is visited annually by more than 6 million people from all parts of the world. The colourful fair has become the best way for travellers to get acquainted with the beautiful Andalusian traditions. On the days of the … Open

One of the most unusual museums in the city is the Museum of Glass and Crystal. It is a private museum which was opened in 2009. The location of this museum is an old mansion of the 18th century, which contains about 3,000 exhibits. A significant part of the artifacts collected here is made of glass. The museum houses a collection of marvelous vases, antique chandeliers with glass pendants, lamps and various … Open

Many travellers go to the La Revuelo store for souvenirs from Malaga. It is famous for a huge selection of postcards with local landscapes and attractions, which cost only 0.30 euros, and the store sells magnets, t-shirts, colourful bags, painted plates and crafts made of wood. In addition to the usual souvenirs, you can choose excellent guides with descriptions of local attractions, their cost is about 7 euros. … Open

2. The same convenient means of transport is a taxi. A taxi cab can be taken from specialized taxi parking lots, called by phone or even caught on the road. A “libre” indicator means a free taxi car meanwhile an “ocupado” sign stands for an occupied taxi car. The center of the city is advised to cruise on foot as all the significant landmarks and city sights as well as entertaining centers are … Open