The landmarks of Lyon are not limited to the presented 8 architectural sights. A curious traveler will find thousands of exciting places here. However, below we present the most impressive and striking architectural sights of Lyon, which should be noted at first - Basilica of Notre-Dame de Fourviere, Museum of Fine Arts, Saint-Nizier Church, Eglise Saint Paul, Notre Dame Saint-Vincent and many others. In this unusual virtual tour, you will see the photos and read the facts on each monument. But, most importantly, you will be able to fly over each landmark, and to see the whole architectural ensemble of Lyon in 3D format from the sky. 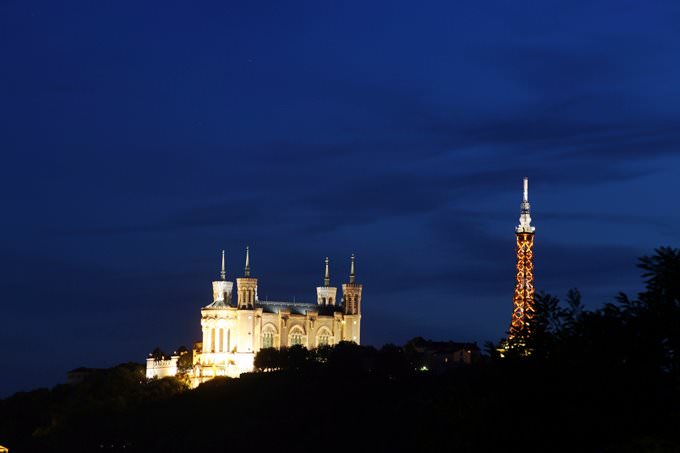 Facts:
» The Basilica of Notre-Dame de Fourviere is a landmark of Lyon that is under the protection of UNESCO. It is located on top of the Fourviere hill and seen from any parts of the city.
»  The basilica was built in 1168 at the site of an old church. When it was destroyed, the chapel remained undamaged and has survived to this day.
»  The magnificent church with four towers and a belfry has two naves. The upper one is decorated with stained glass windows, sculptures, and mosaics. In the basement, there is the crypt of St. Joseph. The basilica was completed only in 1964.
»  The chapel preserved since ancient times was restored in 1845. Its top is decorated with the huge golden statue of the Virgin Mary. Exactly in this chapel, Anne of Austria prayed for the birth of a son in 1630. 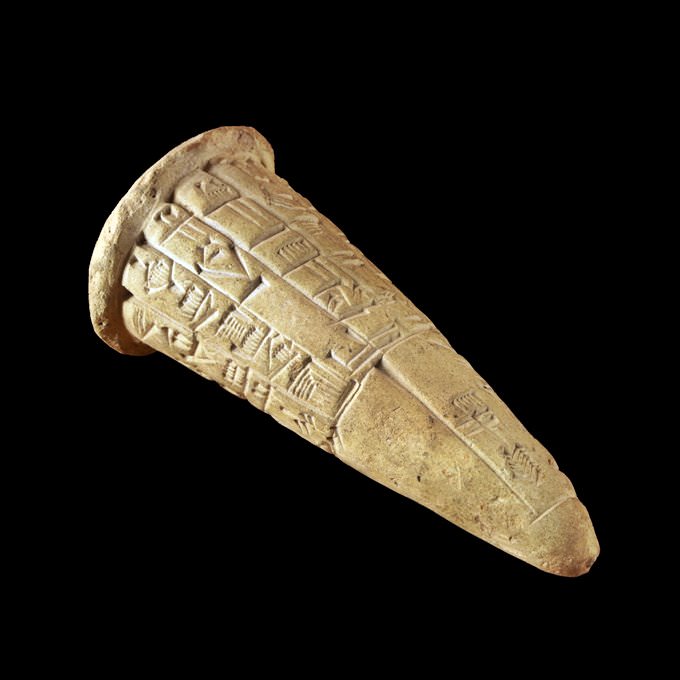 Facts:
» The Museum of Fine Arts opened its collection in 1860. Before that, the building belonged to a convent. After the dissolution of the convent in 1806, a drawing school worked in the palace that had a collection of paintings belonging to the church.
»  In 1860, the building was redesigned into a museum. The 70 exhibition halls display works by French, Italian, Spanish, German artists from the 15th century on.
»  The sculptural collection consists of 1,300 items. A part of the collection – bronze sculptures of the 19th century – is displayed in the museum garden.
»  A collection of ancient Egyptian art exhibits occupies 9 halls. Egyptologists Alexandre Varille and Victor Loret gave over 1,000 artefacts to the museum, including the sarcophagi of Ptolemy III and Ptolemy IV.
»  The museum also exhibits the country’s largest numismatic collection consisting of 50,000 items. 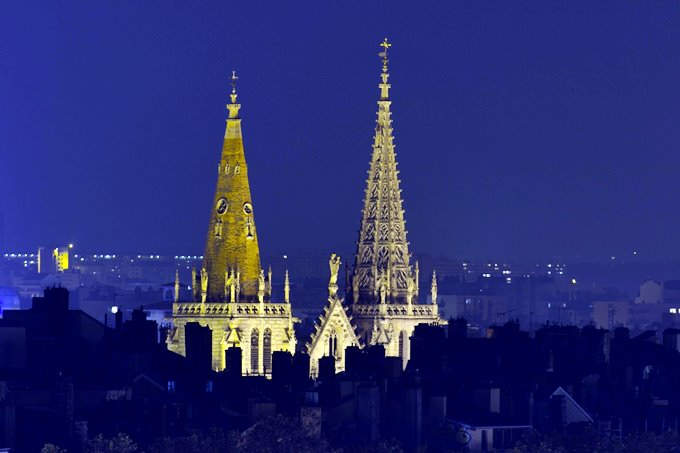 Facts:
» The Church of Saint-Nizier is a beautiful Gothic temple building having a long history of existence and construction. The first building was erected in the 5th century on the site of the ruined Roman temple.
»  Over centuries, it was gradually acquiring its current appearance: the facade was made in the 14th century, the pink-stone bell tower was made in the 15th century, the side chapels were built in the 16th century, one of the spires appeared here in the 19th century. Therefore, the spires are different.
»  There is a burial place of Bishop Nicetius (573) in the church and an ancient 6th-century crypt with an epitaph of St. Sacerdos, a bishop that is also buried here, in the dungeon.
»  A picturesque statue of the Virgin Mary by Antoine Coysevox (17th century) and original stained-glass windows have been preserved here.
»  The last renovation lasted for 20 years, until 1993. Today, the Church of Saint-Nizier has a parish and holds regular services. 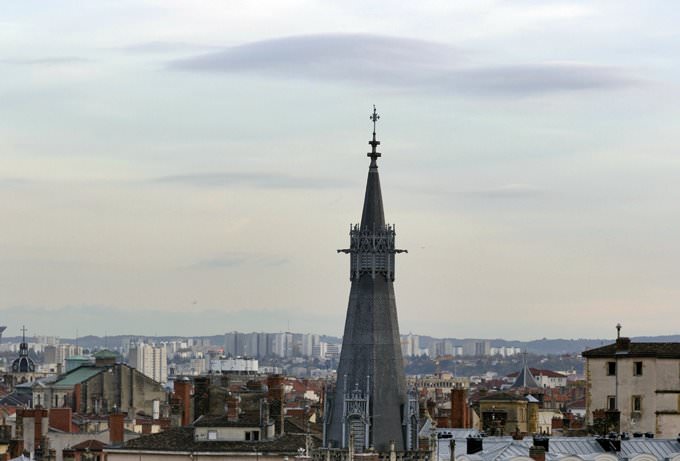 Facts:
» The Église Saint-Paul (St. Paul’s Church) was founded by Sacerdos, the bishop of Lyon. In the 15th century, several Gothic chapels, whose stone arches bear pictures of angels playing musical instruments, were built nearby.
»  The western spire was erected at the same time: an elongated cone finished the construction. The first adoration here was held by Cardinal Richelieu.
»  In the second half of the 17th century, Saint-Louis emphasized and glorified the power of the Jesuit Order.
»  The underground room still has the burial places of eminent rulers.
»  Charlemagne’s Lyceum used to work at the church. In the 19th century, it was considered a prestigious educational institution.
»  The present building has been preserved since the second half of the 19th century. The octagonal tower and the altar ledge built onto the temple are decorated with small columns. The dome (upper vault) consists of two octagonal parts. The walls in the Romanesque style were modified to make the hall more spacious. Later, ribbed vaults emphasizing the lightness and loftiness of the interior were added to them.
»  A 15th-century altar and three bells have survived to the present day. One of them weighs over two tons. Two fonts were presented to the cathedral by Victor Hugo to commemorate his daughter’s baptism in 1851. 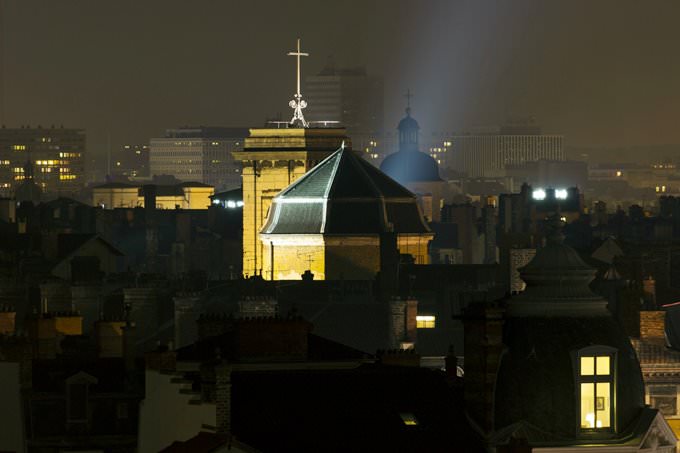 Facts:
» The Augustinian monastery had a chapel. It fell into disrepair over time. The church was turned into a warehouse.
»  In the 1630s, the building received the status of the Church of St. Lazarus again. Catholic priest Vincent de Paul was the head of the priests. He initiated the creation of a monastic association. Women helped the afflicted.
»  The construction of a new temple was conceived in 1759 when classical architecture was revived. After Vincent died, he was canonized. A church named after him was being erected on the site of the former chapel.
»  The construction couldn’t be completed due to the Great French Revolution. It was finished twenty years later and consecrated by the archbishop.
»  An organ was specially manufactured for the Église Notre Dame Saint-Vincent. It has survived to the present day. Later, one more organ was acquired for choral singing.
»  The western facade has neo-Gothic features. According to the architect’s design, two 42-metre towers in the style of flaming Gothic were located at the sides of the church.
»  The pediment of the building and the interior have lots of small elongated elements. They resemble wavering flames. The tops of the towers have sculptures of saints.
»  The Église Notre Dame Saint-Vincent is open to parishioners. Facts: » The Grande mosquée de Lyon is considered to be the sixth-largest mosque in France. The architects submitted a project of a religious building for the authorities’ consideration.
»  The foundation stone was laid in mid-June 1992. The King of Saudi Arabia and other Muslim countries provided financial support. The grand opening took place two years later.
»  The religious building has a traditional round dome, arches, and columns. The facade resembles stairs. There is a cylindrically shaped extension near the mosque. A muezzin calls Muslims to prayer from the 25-metre-high minaret.
»  The entrance is a glass pyramid supported by 230 columns. The walls are covered with lace trim and ornaments of a precise pattern. Geometric and floral motifs were used in the decor.
»  The colour palette of the mural is dominated by green as a symbol of abundance and tranquillity. The wall of the house of worship has paintings with Islamic symbols and quotes from the Quran.
»  The Great Mosque has high vaulted ceilings. They were covered with murals. Some halls have carpeted floors. The complex includes a large library, a prayer hall, and a school.

Facts: » The Trinity Chapel is the first city construction built in the Baroque style by architect Martellange. It made an indelible impression on the townspeople. It happened on the territory of Jesuit College in 1622.
»  The inner walls of the chapel were decorated with sculptural panels by Pierre David, a sculptor that was famous at that time. Today, they are located in two chapels situated between the choir balcony.
»  During the 20th-century restoration, bronze lamps, which were exact copies of the 17th-century items, were made.
»  In 1802, the Jesuit College was renamed Imperial Lyceum. It was connected with the occasion when Napoleon declared himself president of the Italian Republic during a college meeting.
»  The lyceum is currently named after André-Marie Ampère, a former math teacher. The present-day Trinity Chapel hosts performers, musicians, artists, and even demonstrates fashion shows.

Facts: » The Metallic Tower of Fourvière was constructed on Fourvière Hill in 1894.
»  The construction was initiated by Madame Gay, a wealthy citizen of Lyon. She founded a joint-stock company that funded the construction of the tower.
»  It was Madame Gay’s desire to erect an “Eiffel Tower” in Lyon before the World Exhibition.
»  The tower is an exact copy of the Eiffel Tower’s top. It is 89 metres high. It used to have a restaurant and an observation deck that citizens enjoyed visiting until they closed down.
»  During the 1943 occupation, the tower was planned to be cut and remelted, but it didn’t eventually happen.
»  The tower was open to visitors until 1953 when Madame Gay’s relatives sold it to a broadcasting company for 15 million francs. Now it is a radio repeater.

CONTINUE - PART II »»
This guide to architectural sightseeing in Lyon is protected by the copyright law. You can re-publish this content with mandatory attribution: direct and active hyperlink to www.orangesmile.com.
Lyon - guide chapters 1 2 3 4 5 6 7 8 9 10 11

Build your walking routes in Lyon on the landmark map Architectural landmarks in the regions around Lyon

Grenoble
The cathedral was first mentioned in the chronicles of 902. It was recognized as the Church of the Virgin Mary. During the excavations in 1989, it was found out that there had already been a religious building at the site of the modern cathedral. It was constructed in the 3rd century. A room where people were baptized was found here. In the 4th century, there was a clergymen’s residence. In the 13th century, the complex of ... Open »
Geneva
The cathedral built at the beginning of the 13th century combines many architectural styles but looks like a single unit. Its interior features some austerity, modesty and, and strictness. Here, you can such unique item, as the rich chair of the French theologian Jean Calvin. You can also climb up the tower. The path in one place offers two directions, southern and northern. The northern tower with a high spire has a panoramic view of the ... Open »
Torino
The Mole Antonelliana has been the highest building in Turin and even in France until 2011. It was designed by architect Alessandro Antonelli. Originally, it served as a synagogue for the Jewish community in 1863. It was planned that the building would be 66 m high. Antonelli was obsessed with high buildings. As a result, the tower is 167.5 m high. The 90-year-old architect did not manage to complete the project and see his creation. ... Open »
Marseille
Cathédrale Sainte-Marie-Majeure is located at the site of the wooden church built in the 5th century, which is proved by excavations. In the late 19th century, it was decided to demolish the old building upon the order of Napoleon III. The citizens were not satisfied with this decision and held a protest demonstration. The old building was not dismantled completely. The new cathedral was built near it. The locals call it “strips on the ... Open »
Nice
Sainte-Reparate Cathedral was built in 1699 in honor of the patroness of Nice. According to the legend, young Reparata from Palestine professed Christian faith and died in agony for this when she was 12 years old. Angels brought a boat with the young saint to Nice, to the shore of the Angel Bay that was named after this event. The cathedral is located in an old part of the city. It is a typical construction built in baroque style. The ... Open »
OrangeSmile.com - online travel reservation expert providing reliable car rental and hotel booking services. We feature more than 25.000 destinations with 12.000 rental offices and 200.000 hotels worldwide.
Secure Server