Detailed hi-res maps of Zaragoza for download or print 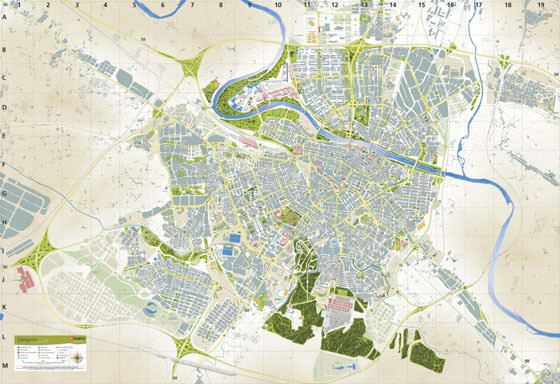 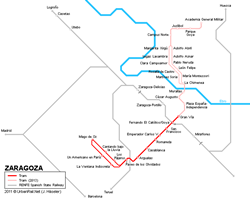 Search for services, infrastructure and sights on map of Zaragoza

Our guide chapters over Zaragoza

The house speciality is considered to be grilled meat. The restaurant cooks are genuine experts in grilled dishes. In addition to tasty hot meat the restaurant visitors may order various vegetable salads and garnishes as well as may complement a meal with a glass of the best Spanish wine. Those tourists who can not imagine any meal without fish dishes will love to visit the Casa Colas restaurant. This plain and … Open

In 1894 the festival got a new tradition. Since that time the celebration has added a new event being a stunning dance competition which engages all talented dancers and amateurs. In the middle of the 20th century the bright ethnic holiday got several updates and was added with new events being the Offering of Flowers and the Offering of Fruits. These solemn ceremonies are considered to be the most breathtaking and … Open

In a spectacular modern building in a futuristic style is located CaixaForum cultural center. It was opened just a few years ago. It has several exhibition galleries, a modern concert platform, and a viewing platform on the upper level. Guests of the center can visit a local restaurant. Tourists are usually attracted by an original souvenir shop. Among the modern monuments of Zaragoza, The Spaniard fountain is … Open

4. Tips are welcome almost for every service. Restaurant waiters and taxi drivers are waiting for a cash reward of 5-10% of a sum of the counter or a bill meanwhile a maid in a hotel is commonly rewarded with 1-1.5Euro. 5. The peak of the tourist season is considered to be a period from the beginning of April till the middle of June as this period features the most favorable weather for rest and … Open

Another exciting location worth mentioning for the interest of those who want to spend time actively is the Laser Space Club. Here as can be easily guessed from its name, tourists can attempt laser tags. At the great club Pettum Trampolines, you can feel like a kid again and spend your leisure time jumping on trampolines. The Dock39 rock climbing site, which is popular among visitors and locals alike, deserves to … Open

Festivals and events in Zaragoza

Christmas in Zaragoza is another bright event which excites its guests with a piquant cocktail of colorful parades which create a festive atmosphere. Musicians, dancers, theatrical troupes from all over the world take part in processions along the city’s central streets to surprise Zaragoza’s residents and visitors with bright shows. In addition to parades, there are also craft and food fairs during the … Open