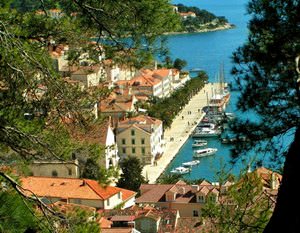 According to the archeologists, Hvar was inhabited three thousand years before our era. If you do not believe it, then go to the Grapceva cave. This was the place where the remains of a sailing boat, the weapons and various instruments of the Neolithic Age were discovered. You can get acquainted with the finds, you just need to visit the archaeological museum of Hvar. You can get to the cave only as part of an organized excursion – the entrance to this unique place is partitioned by a grid to avoid vandalism. Grapceva Cave is located seven kilometers from Jelsa city.
Guide to Hvar Island sightseeing - things to see and to visit
Island of Hvar is widely regarded as the sunniest island of Adriatic. This beautiful and charming place has lots of wonderful features. Unique climate, abundance of beach leisure places, …

Open
Jelsa is also a true monument of history. It was founded six centuries ago as a port of the Pitve village. Many buildings have preserved since then till our time but there are even older buildings on the outskirts of the city. For example, Fort Galešnik, originally built by the Illyrians, and later extended by the Romans. Until the Middle Ages, the fortress really protected the local inhabitants from the conquerors. Fort Tor, located on the site of a Roman fortress of the 4th-3rd centuries BC, is also interesting. The Church of St. Mary was built in 1331 and later restored several times. The altar statue was brought to the church by the refugees from the mainland in 1539 and is perfectly preserved. The Church of St. John dates back to the 17th century. In the center of the city, on the square, you can see not only the 16th-19th-century houses but also the Slatina stream, which was known since antiquity.
In Stari Grad, founded before our era by the Greek colonists, the ruins of the defense wall are still preserved – the remains of the city gates can be found near the church of St. John. During the excavations, there were also found the remains of houses and a lighthouse built by the first settlers. The monastery of the Dominicans, which can be found in the city, was already built at the beginning of the Middle Ages, and the monastery of St. Peter the Martyr was built in the 15th century. Be sure to visit the castle palace Tvrdalj. Created by the naturalist writer Peter Hektorovich, he had not only to serve for protecting the inhabitants but it was also a model of the universe. Copyright www.orangesmile.com
Family holidays with kids in Hvar Island. How to entertain your child, things to show to children.
Kilometers of clean beaches, a measured flow of time and many historical monuments of different epochs – that's how you can briefly characterize the island of Hvar. If you want to spend …

Open
Sveta Nedelja was first mentioned in the chronicles in 1301 but the scientists found that for the first time people appeared on the site of the future city back in the Neolithic period. One of the most beautiful buildings of the Sveta Nedelja is the Church of the Holy Trinity, built in 1501. Later it was rebuilt more than once. The Chapel of St. Rock, built in the 17th century, was not subjected to special changes. In the Sveta Nedelja, you can see the 16th-century Castle of Kerestinec, which was reconstructed in the 20th century. 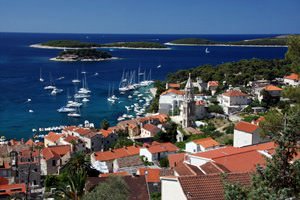 Vrboska, a small 15th-century town, was founded on the site of a Roman settlement – the ruins of the Ancient House prove that. The Church of St. Peter, the oldest building of the city, was built before the beginning of the 14th century. Here you can see the unique church-fortress of St. Mary, which was fortified after the attack on the city of the Venetian and Turkish troops in the 16th century. The most beautiful altar with the works of Paolo Veronese and Ivan Rendic can be seen in the local church of St. Lawrence, built in the late 16th century and restored in the 17th century.
Cuisine of Hvar Island for gourmet with top restaurants and cafe
On the island, you can taste all the best Croatian dishes. Due to the proximity of the sea, the seafood courses are also very popular and varied here. However, the most significant dish for …

Open
The modern capital of the island, the city of Hvar, also has a large number of ancient buildings. St. Stephen's Cathedral of the 16th century is really beautiful and the bell tower, attached to it in the 17th century. By the way, anyone can rise to the bell tower. In Arsenal, you can admire the first public theater, built in 17th century in Croatia. In the central square, there is Paladini Palace and Hectorovic Palace. Be sure to visit the already mentioned Archaeological Museum of Hvar. In the city, you can also see the 16th-century Venetian fortress Spagnola, if you climb the hill of Saint Nicholas – the 18th-19th-centuries French fort. By the way, there is a magnificent view from the fort. In the Križ Bay, you can visit the Dominican monastery, which features a large collection of old books, coins, and other art objects.

In the section below, you can get one of our excursion, activities or city discovery tours over Hvar Island and surroundings. Our website offers 10-30% lower ticket prices, when compared to the offline purchase on the spot.

This guide to cultural sights Hvar Island is protected by the copyright law. You can re-publish this content with mandatory attribution: direct and active hyperlink to www.orangesmile.com.
Hvar Island - guide chapters 1 2 3 4 5 6 7 8 9
Reference information
Map of all palaces

Public palaces near Hvar Island
♥   Palace 'Diocletian’s Palace' , 40 km from the center. On the map

Cathedrals and basilicas near Hvar Island
♥   Konkatedrala sv. Petar Apostola, Split, 39.9 km from the center. On the map

Excursions over cultural sights of neighbours of Hvar Island

Hvar
The Franciscan monastery located in the immediate vicinity of the capital is of great interest for those who are fond of old things. The large-scale historical building keeps many unique relics, including ancient maps and books, priceless works of art and religious items in its walls. The monastery is equipped with a great gallery, so it will be interesting to fans of medieval ... Open »
Brac Island
The Dragon Cave in Murwitz is of greater interest to the travelers. This unique man-made object still attracts scientists from all over the world. In the manually created cave, there are many well-preserved bas-reliefs and drawings, where biblical motifs and images of angels coexist with figures of dragons, fairies and many other mythological creatures. The exact authorship ... Open »
Vis Island
Nevertheless, Vis is not only famous for ancient constructions which were built more than two hundred years ago. The island was one of the command posts of Marshal Josip Tito during World War II. Be sure to visit Tito’s cave. It consists of two small caves. Josip Tito and the partisans hid there during the war. A path with 275 steps leads to the cave. It is easy to find ... Open »
Korcula Island
It is worth to stroll through the narrow streets of the Old Town of Korcula. Here you can see the fragments of the Medieval architectural solutions, and the Renaissance buildings, and the creations of the architects of the New Time. The city was ruled by both the Slavic princes, and Venice, and Hungary, and Genoa, and Italy, which could not but affect the diversity of ... Open »
Split
Art lovers will enjoy the Mestrovic Gallery, it acquaints visitors with works of the prominent Croatian sculptor. The gallery is located in a beautiful palace of the early 20th century built by the sculptor for his family. You have to include a visit to the Museum of Croatian Archaeological Monuments to the entertainment program. It is also one of the oldest cultural venues in ... Open »
Ciovo Island
You can see the exposition of the museum of religious art. There are paintings by prominent Serbian artists here, and the objects for liturgy and worship, and even a 14th-century crucifix, which once crowned the triumphal arch on one of the island’s chapels. For those who like art and history, the Dominican monastery of the Holy Cross will also be fascinating. It is ... Open »

Culture guide to Hvar Island. Which fascinating sights to visit once you are in Hvar Island: temples, churches, museums, theaters and castles. Recommendations (with addresses, phone numbers and links) on the places 'must visit' in Hvar Island. Plan your own city excursion by using this page info!