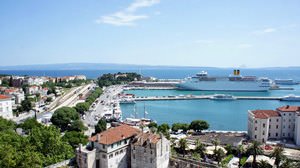 The Palace of Diocletian is an attraction that is known far beyond the city. This is a real miniature city with an abundance of beautiful historic buildings; its territory is fenced with high fortification walls. Here is the Church of St Dominic, named after the patron saint of the city. The religious building was erected on the ruins of an ancient mausoleum. In the first half of the 20th century, a large-scale reconstruction was held, so today church appears to visitors in all its glory. The main decoration of the church is the handmade altar. The inescapable part of the excursion is watching the city panorama from the highest bell-tower.
Cuisine of Split for gourmet with top restaurants and cafe
Split will certainly appeal to those who can’t relax without a visit to the cozy restaurant or cafe. Local conobas - small restaurants with a homelike atmosphere and extremely pleasant …

Open
Among other palace buildings the Peristyle is noteworthy; it is a monument of the Roman Empire. It is a large rectangular courtyard surrounded by tall pillars; the large-scale building was used for ceremonies. Nearby is the so-called Hall - a beautiful round hall with a dome, which was used as an entrance to apartments of the emperor.
In the tiny historic town there is the Temple of Jupiter; in the Middle Ages it was converted into a Christian church. Surprisingly, the building has escaped destruction, and it has preserved to our days literally in its original form. Split is also famous for numerous cultural venues, the most visited among them is the Archaeological Museum of Split. Copyright www.orangesmile.com
Your active city break in Split. Attractions, recreation and entertainment - best places to spend your day and night here
Guests of Split won’t experience any shortage of things to do; tours to historical monuments can be successfully combined with walks around the shops, scenic parks and entertainment …

Open
It was founded in 1820; it is the oldest museum in the country. Its collection includes about 150,000 exhibits. The collection of jewelry and precious stones attracts the attention of visitors more than any other. Guests of the museum can see unique historical artifacts there. 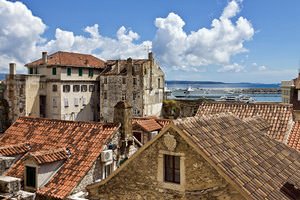 Art lovers will enjoy the Mestrovic Gallery, it acquaints visitors with works of the prominent Croatian sculptor. The gallery is located in a beautiful palace of the early 20th century built by the sculptor for his family. You have to include a visit to the Museum of Croatian Archaeological Monuments to the entertainment program. It is also one of the oldest cultural venues in Croatia. Among the exhibits there are statues of the age of more than a thousand years, but the majority of exhibits dates back to the early Middle Ages.

In the section below, you can get one of our excursion, activities or city discovery tours over Split and surroundings. Our website offers 10-30% lower ticket prices, when compared to the offline purchase on the spot.

This guide to cultural sights Split is protected by the copyright law. You can re-publish this content with mandatory attribution: direct and active hyperlink to www.orangesmile.com.
Split - guide chapters 1 2 3 4 5

What to visit during two-day excursion in Split

Public palaces near Split
♥   Palace 'Diocletian’s Palace' , 1.4 km from the center. On the map

Cathedrals and basilicas near Split
♥   Katedrala sv. Lovre, Trogir, 16.5 km from the center. On the map

Unique spots in Split and near

Distance from Split center - 56.4 km.
In Bosnia and Herzegovina there is the ancient town of Livno. The first settlement there was founded by the Dalmatians more than 4 000 years ago. Subsequently, these places were inhabited by the Romans. Today, the town is the centre of the eponymous community. The population is more than 10 000 people. The first mention of Livno dates back to the end of the 9th century. The town reached its heyday during the Ottoman rule. … Read further

Photogallery of cultural heritage of Split

Excursions over cultural sights of neighbours of Split

Ciovo Island
The original name of the city is Tragurion, which in Greek means “the place where the goats graze”. During the rule of the Romans here, the city developed quite successfully, although it remained in the shadow of the more powerful Split. Many retired legionaries lived in Trogir. To this day, on the territory of the city, one can find the remains of the villas, thermaes, ... Open »
Brac Island
It is worthwhile to find time for visiting the Blatz Desert. The monastery, founded in the 16th century by monks, who fled from the Turkish dictatorship, was remarkably preserved. Until now, it remains a mystery, how its inhabitants managed to grow a rich crop on such unfruitful soil in difficult natural conditions. In the monastery itself, you can see not only a large ... Open »
Hvar
Next to the cathedral there is the Bishop's Palace. This historic building was once converted into an interesting museum. It holds a rich collection of objects of church utensils and fine jewelry. On the square in front of the cathedral there is another interesting historical object, the city well, which has remained the main source of fresh water for local residents for many ... Open »
Hvar Island
The modern capital of the island, the city of Hvar, also has a large number of ancient buildings. St. Stephen's Cathedral of the 16th century is really beautiful and the bell tower, attached to it in the 17th century. By the way, anyone can rise to the bell tower. In Arsenal, you can admire the first public theater, built in 17th century in Croatia. In the central square, ... Open »
Makarska
The residents of Makarska are distinguished by their friendly nature and pride in their national identity. For hundreds of years, they have carefully preserved their traditions, dedicated to the regional culture of the event are appropriate for each regular festival here. Musicians and dancers performing in the streets often dress in traditional costumes, and tourists can buy ... Open »
Vis Island
There was the supreme headquarters of the guerrilla army in the cave. Tito had meetings, met speakers and developed plans of military operations inside the cave.Once the headquarters was found and Tito evacuated. There was a museum after the war but it decayed. Nowadays, all of the main exhibits are carried away but everyone can visit Tito’s cave. You can get there ... Open »

Culture guide to Split. Which fascinating sights to visit once you are in Split: temples, churches, museums, theaters and castles. Recommendations (with addresses, phone numbers and links) on the places 'must visit' in Split. Plan your own city excursion by using this page info!