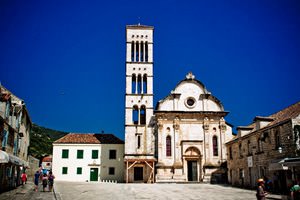 The inhabitants of Hvar are typical Croats with all their contradictions. Many still argue, which is more in the Croatian mentality – Slavic or Roman. It is difficult to answer exactly, and it is not necessary – just take the customs and habits of local residents as they are. For example, if you are a girl and travel alone, then be prepared for increased attention from the opposite sex. For Croatian men, it is normal to give compliments to any representative of the beautiful half of humanity, regardless of age and appearance. However, it usually does not go past flirting.
Best beaches and recreation areas around Hvar Island
Most beaches of Hvar are pebble-stone and every resort of the island is full of charm and unique features. Milna is one of the most popular resort towns offering its guests four excellent …

Open
The local residents are neutrally-polite to foreigners. By the way, keep in mind that it is not common among the Croats to directly say ‘no’ to anyone. Most likely this results in non-punctuality and failures of the locals. If you have agreed with someone about something, it is quite possible that your partner will simply "forget" to fulfill his part of the deal. More precisely, he decides to do everything tomorrow, and tomorrow, as everyone knows, never comes. Also remember: if you invite local residents to meet, most likely, no one will come at a specified time. Why? Probably not even the Croats themselves know the answer to this question.
The Croats generally prefer to enjoy everything they do. Some Italian habits, for example, evening walks in beautiful outfits are also common here. And, apparently, because of the influence of the Romans, the Croats like to actively gesticulate when talking, even if it's about some dry facts. By the way, remember that to call a local resident a Yugoslav is to offend him. Copyright www.orangesmile.com
Top hotels in Hvar Island for business trip or short vacation
Island of Hvar offers its guests more than 200 accommodation places, including amazing historical hotels and luxurious resort complexes. The most interesting historical hotels can be found …

Open
The Croats, in general, are very patriotic and reverent towards their country. Want to win the sympathy of a local resident? Try to learn at least a couple of words in Croatian. Here there is no reason to be especially wary of illegal actions but, as in any touristic place, in Hvar, it is better to closely monitor the safety of your own things: pickpockets do operate here. However, in other respects, the hospitality and courtesy of the locals make a vacation here very comfortable. 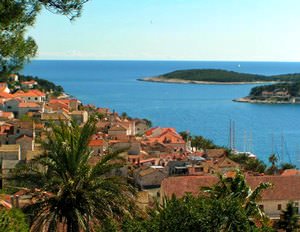 Walking along the city streets, keep in mind that, although the sea is very close, being in a bathing suit or without a shirt is punishable by an administrative fine in a large number of places. Sunbathing nude you can only on the specially designated beach, located away from the cities. The Croats are religious, the overwhelming majority of the population is Catholics and they adhere to the norms of Christian morality and ethics.
Shopping in Hvar Island - main shopping streets, outlets and boutiques
The first and most popular purchase in Hvar is a bag of lavender. Perhaps, the island is one of the largest suppliers of lavender not only in Croatia but all over the world. The linen bags …

Open
The locals like to have fun and they know how to party, therefore, during religious holidays, the island is captured by a wave of mass festivities. Most noteworthy, of course, are Christmas and Easter, but also the Epiphany, and All Saints Day, and the Assumption of the Virgin – an occasion for the Croats to rest. If you get here during Zvonchar before the Great Lent, in the evening, you can see how the groups of young guys, dressed up in cow suits and covered with cowbells, walk the streets and drive away evil spirits. And on the eve of St. George's Day, the Green Team walks the streets, expelling evil in exchange for sweets. 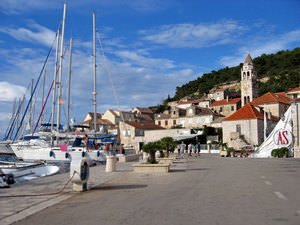 Secular festivals are literally filled with dances, music, and national customs. In the city of Hvar, for example, the summer festival is held throughout the summer, in which the oldest local theater regularly shows performances, and folk groups perform directly on the streets. In August, the Festival of Wine is held in Elsa, and in Vrboska you can get to the "Fishermen's Nights" holiday, dedicated to the seafood.

This guide to traditions and festivals in Hvar Island is protected by the copyright law. You can re-publish this content with mandatory attribution: direct and active hyperlink to www.orangesmile.com.
Hvar Island - guide chapters 1 2 3 4 5 6 7 8 9

Cathedrals and basilicas near Hvar Island
♥   Crkva sv. Stjepana, Stari Grad, 3.5 km from the center. On the map

Colors of Hvar Island in photos

Traditions and festivals in cities around Hvar Island

Hvar
Tourists also prefer to bring lavender as a souvenir from the island; local craftsmen make a lot of interesting home decorations and talismans of it. Ladies will be delighted with an abundance of fine perfumes and cosmetics; as you might guess, all of them are made with addition of lavender. Summer remains the most preferred leisure time on the island; that’s because of ... Open »
Brac Island
The Croatians surprisingly combined the features of the Slavs, Romans, Turks, and many others, for centuries being close to completely different neighbors in terms of culture and perception of the world. Remember that there is no hurry here. In general, the main words that characterize local residents sound like polako – slowly, without rushing; sutra – tomorrow; nema ... Open »
Vis Island
One more interesting Croatian peculiarity is that locals will never tell tourists that they break rules or don’t follow some traditions or customs. If you are going to visit a reserved territory or private land, nobody will hint at the need for getting permission to enter there. That’s why you can be caught unawares when an angry owner of the private property will find ... Open »
Korcula Island
Despite these features of the local mentality, it is a pleasure to deal with the Croats. They are quite friendly, and if they start doing some work, they usually try to do everything qualitatively. Here it is common to gesticulate while communicating and even raise your voice – apparently, because of the Italian influence as well. For the Croats, the family is very ... Open »
Ciovo Island
Despite the fact that they do not wear national costumes since the 19th century, many Croats wear traditional attire during holidays as a sign of respect for their history. The majority of the population of the island is Catholic, therefore it is religious holidays that are most widely celebrated here – Easter, Christmas, Epiphany. Largely due to the Christian morals, in ... Open »
Murter
For example, a taxi driver can talk on the phone while driving, but he will take you to the right place without any accidents. A hairdresser can discuss philosophical questions with her friend and watch series during the working process, but you will get a perfect hair cut. A shop assistant can talk with her friend in the workplace but he will sell the most suitable clothes. ... Open »

Cityguide on traditions, mentality and lifestyle of people in Hvar Island. Learn the best periods to visit Hvar Island to discover its soul - authentic festivals, events and celebrations. We will also reveal the interesting habits, attitude towards the world and to tourists in Hvar Island.