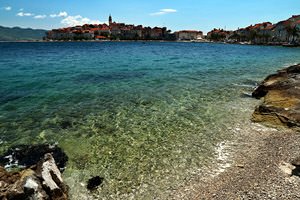 People have inhabited Korcula back in prehistoric times. The proof of this is the cave Vela Spila, located near the town of Vela Luka. The archaeologists have discovered numerous finds of the Mesolithic and Neolithic times inside the cave – ancient weapons, stone tools, unique horse sculptures, animal and human bones. All these findings are exhibited in the archaeological museum, located in the center of Vela Luka. In the city itself, you can find examples of architecture from different historical eras. Nearby, in Gradina Bay, is the church of St. John, built in the 15th century. In Vela Luka, there is one of the oldest religious buildings on the island – St. Mark's Cathedral. It was built, presumably, in the 14th century.
Family holidays with kids in Korcula Island. How to entertain your child, things to show to children.
For many years, Korcula Island has been under the rule of various states. A large number of historical and architectural monuments of different epochs starting back from the Neolithic period …

Open
The capital of the island – Korcula is not less interesting to a traveler. This medieval city is included in the list of European monuments of history and architecture. Unfortunately, the city wall was dismantled in the 18th century for being unnecessary but eight powerful towers still stand in their places. In one of them, by the way, there is an entrance to the territory of the Old Town, the most interesting part of this ancient settlement from a historical point of view. Here, in the Cathedral Square, is the Cathedral of St. Mark, the Bishop's Palace, in which you can see the treasury, and the 15th-16th centuries Gabrielis.
In the latter, the Korcula City Museum functions. In the exposition of the museum, you can see the collections that tell about the culture and history of the island from the time of the settling to our days. Unfortunately, not everything is available for tourists to see: because of the small size of the halls, some of the artifacts are stored in the storerooms. However, you can still see the 4th century BC "pessimism from the Lumbarda", a clay tablet recognized as the oldest written document found on the territory of Croatia. Copyright www.orangesmile.com
Cuisine of Korcula Island for gourmet with top restaurants and cafe
The cuisine of the Adriatic coast was influenced by neighboring Italy and France slightly larger than the cuisine of central Croatia. In Korcula, you can easily order the usual Croatian meat …

Open
In the center of the city there is also the house of the great traveler Marco Polo. Many believe that this famous person not only lived on Korcula but was born here in 1254. Nobody knows, whether it’s true or not but there is a small museum in the house, in which Polo once lived. The basis of the exposition consists of the things that belonged to the traveler. You can see in Korcula the Church of All Saints, built in 1306. Unfortunately, its true appearance has not been preserved up to the present time because of a large number of later reconstructions. You can see a vast collection of ancient icons in this church. 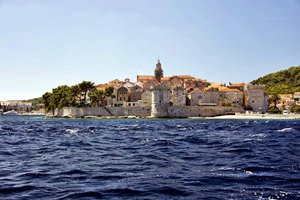 It is worth to stroll through the narrow streets of the Old Town of Korcula. Here you can see the fragments of the Medieval architectural solutions, and the Renaissance buildings, and the creations of the architects of the New Time. The city was ruled by both the Slavic princes, and Venice, and Hungary, and Genoa, and Italy, which could not but affect the diversity of cultural heritage, street planning, and the decoration of the churches. It is here, by the way, where there is a large collection of all kinds of art monuments, including replicas of paintings by Leonardo da Vinci, made almost immediately after they were painted.
Authentic traditions, festivals and lifestyle of Korcula Island inhabitants
The culture of Croatia absorbed many customs and traditions of the neighboring peoples. Take, for example, the tender love of the local residents for coffee and chocolate, which appeared due …

Open
Take a stroll through the streets of Lumbarda. The city was founded in the 3rd century BC. Not far from the city, the remains of a Roman villa have been preserved. Here you can also see the beautiful parish church of Sveti Rok and the Church of the Holy Cross, built in the 18th century. There are three medieval chapels in the city: Saint Bartul, St. Peter, The Nativity of the Virgin. The fans of history should go to the island of Badia. This is the place where the Franciscan monastery was built more than half a century ago. The building is well preserved and is now used as a hotel.

In the section below, you can get one of our excursion, activities or city discovery tours over Korcula Island and surroundings. Our website offers 10-30% lower ticket prices, when compared to the offline purchase on the spot.

This guide to cultural sights Korcula Island is protected by the copyright law. You can re-publish this content with mandatory attribution: direct and active hyperlink to www.orangesmile.com.
Korcula Island - guide chapters 1 2 3 4 5 6 7 8 9
Reference information
Map of all palaces

Public palaces near Korcula Island
♥   Palace 'Diocletian’s Palace' , 75.7 km from the center. On the map

Cathedrals and basilicas near Korcula Island
♥   Katedrala sv. Marka, Makarska, 40.3 km from the center. On the map

Excursions over cultural sights of neighbours of Korcula Island

Hvar Island
Jelsa is also a true monument of history. It was founded six centuries ago as a port of the Pitve village. Many buildings have preserved since then till our time but there are even older buildings on the outskirts of the city. For example, Fort Galešnik, originally built by the Illyrians, and later extended by the Romans. Until the Middle Ages, the fortress really protected ... Open »
Makarska
A mandatory component of the holiday is gastronomic programs, which are attended by both professional chefs and ordinary locals. During the holiday in the open cafes, you can taste the most popular regional delicacies and wines, as well as enjoy special dishes from fresh seafood. For tourists, Makarska Ljeto festival is a great opportunity to buy interesting souvenirs, local ... Open »
Brac Island
Not far from the entrance to the village, you can find the ruins of the Church of St. Jadra, which was built, presumably, in the 6th or 7th century. The 16th-century Cerinich castle, which is also located near Skip village, is well preserved, as is the nearby church of the Holy Ghost, whose age has already passed 1600 years. There is also the Archaeological Museum in the ... Open »
Vis Island
Vis, the capital of the island is a remarkable place. At least because the first Greek colony Issa located here. The ruins of the settlement are almost explored by the archaeologists and everyone can visit them. Later Vis became a homeland for children of wealthy Venetians and Austro-Hungarians. Wonderful mansions of 16th, 17th and 18th centuries can be found on the streets ... Open »
Split
The Palace of Diocletian is an attraction that is known far beyond the city. This is a real miniature city with an abundance of beautiful historic buildings; its territory is fenced with high fortification walls. Here is the Church of St Dominic, named after the patron saint of the city. The religious building was erected on the ruins of an ancient mausoleum. In the first half ... Open »
Elaphiti Islands
The Elaphiti Islands are situated close to Dubrovnik and they were inhabited in ancient times. Scientists suppose that Greek colonists were first to inhabit this strategically advantageous area with a favourable climate, though Illyrians had inhabited many of the islands before. The archipelago and almost all of the Adriatic islands were under the reign of Latins during the ... Open »

Culture guide to Korcula Island. Which fascinating sights to visit once you are in Korcula Island: temples, churches, museums, theaters and castles. Recommendations (with addresses, phone numbers and links) on the places 'must visit' in Korcula Island. Plan your own city excursion by using this page info!