Sightseeing in La Palma - what to see. Complete travel guide

La Palma is a small island on north-west part of the Canary Islands archipelago. The total square of the island estimates 728 square kilometers. La Palma is an exceptionally beautiful island, which shape reminds of a pear. La Palma is the best choice for those people who like peaceful rest. The coastline of the island is mostly rocky, so the number of islands is not big, but the beaches are no less attractive than other beaches of the archipelago.
Authentic traditions, festivals and lifestyle of La Palma inhabitants
La Palma is considered one of the most colorful Canary Islands. Travelers are attracted here not only by wonderful beaches but also by its special authentic atmosphere. Despite the fact that …

Open
There are many mountains on the island. The highest point of the island is Roque de los Muchachos peak, which height estimates 2387 meters. The northern part of the island is the location of cherry laurel forests that grow 500-1500 meters above the sea level. These are the only remaining forests of laurel cherry that once covered all southern part of Europe. Los Tilos and Cubbo de la Galga ravines are the official biosphere nature reserves and keepers of the unique forests. In these forests you will find pathways, on which tourists can walk.
Tourists should also visit the capital of the island – Santa Crus de la Palma that traditionally attracts visitors by its ancient buildings and narrow streets. In this city you can visit a small triangle Spain Square that is famous for its stone fountain. Near the square is located Church of Savior with a bell tower and Town Hall. Among the attractions of the capital are Castillo de Santa Catalina and Marine Museum made in the shape of the Columbus’s ship «Santa Maria». The ship is made in its natural size. Copyright www.orangesmile.com
Excursion over cultural sights of La Palma - 'must visit' points of interest
If you want to explore the island, the best idea is to start with its capital, the small town of Santa Cruz. The most picturesque place in town is Dali Street where you can find the most …

You can also visit International Astrophysical Observatory. Here is installed the largest telescope in whole Europe.

If rest is all you need, you may enjoy beaches with black sand, yacht club, and fishing club.

On the island is the world-famous Los Tilos Biosphere Reserve, which is a UNESCO World Heritage Site. Almost all the territory of this reserve is a forest. In the Tertiary period similar forests covered the entire territory of modern southern Europe. Now there are very few such forests on the planet. In the reserve you can see many rare plants, and even admire the wonderful birds and other inhabitants of these picturesque places.
OrangeSmile.com recommends best hotels in La Palma Open
You can take a walk in unique historical places in the archaeological area of ​​La Zarza, in whose territory the eponymous ethnographic center is now located. Here, travelers are offered to take a walk in the picturesque foothill areas, where the ancient petroglyphs were found on the rocks. The meaning of some drawings remains incomprehensible. Similar drawings were discovered by scientists in Ireland. In addition to caves with rock paintings, you can visit interesting museums, whose expositions are devoted to the life and household of the earliest settlers of these places. 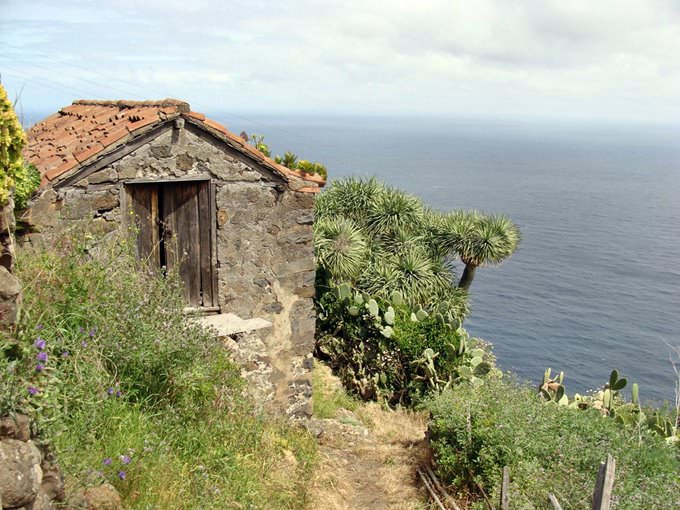 A trip to the reserve of La Tosca will become a real journey into the past. In this reserve, the most ancient plants were preserved. Here you can see the dragon tree, with which the locals connect many interesting legends. On the territory of this reserve, there are several interesting souvenir shops with crafts by local masters.
Advices to travellers: what you should know while being in La Palma
1. The island does not have its own international airport, only a small one, which receives flights from nearby islands. The easiest way to get here is through the island of Tenerife where …

Open
A walk along the slopes of the volcano San Antonio remains a popular entertainment thrill among adventurers. Unlike other parts of the island, there is a completely different, desert landscape. The last major volcanic eruption occurred in 1971, and today one can observe how smoke slowly rises from its crater. 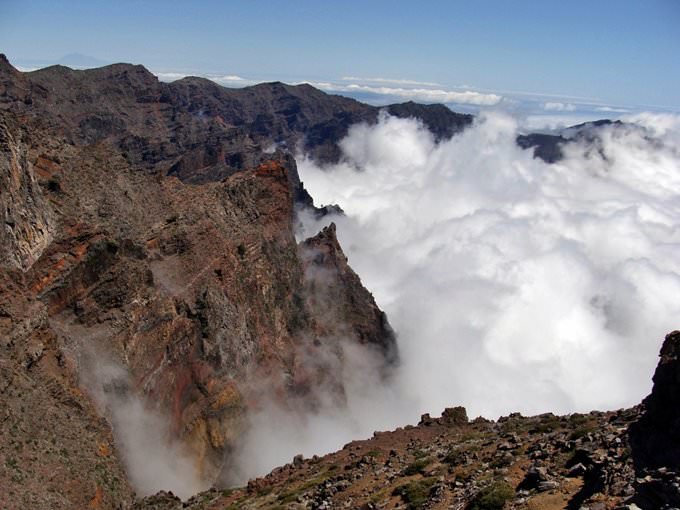 You can get acquainted with interesting historical sights of the island in the Veliko district, which located in the vicinity of the capital. The Sanctuary of Our Lady of the Snezhnaya, in which there is an ancient altar made of silver, as well as a statue of Madonna made of terracotta is also located here. This sanctuary was founded in the Middle Ages, and many elements of its decoration are made of silver. The church is quite large. It contains a rich collection of sculptures and paintings from the 16th to 17th centuries. By the level of its decoration, the ancient church is one of the most luxurious on the island and more like a rich museum.

This guide to iconic landmarks and sights of La Palma is protected by the copyright law. You can re-publish this content with mandatory attribution: direct and active hyperlink to www.orangesmile.com.
La Palma - guide chapters 1 2 3 4 5 6 7 8

Survived castles around La Palma
♥   Castle 'Castle of los moros of Cartagena' Region of Murcia, 9.4 km from the center. On the map

♥   Castle 'Castle of la Concepción of Cartagena' Region of Murcia, 9.7 km from the center. On the map

♥   Castle 'Castle of Galeras of Cartagena' Region of Murcia, 11.1 km from the center. On the map Search touristic sites on the map of La Palma

Sightseeing in regions nearby La Palma

Murcia
In the center of the town you can see the most unusual historic buildings. These streets are always crowded with many people, so the traffic is limited. There are many ancient palaces and churches in Murcia. The most important architectural monument of this place is the Cathedral. The construction of this beautiful building that features the Baroque style lasted from the 14th ... Open »
Alicante
You can start your acquaintance with this city from Iglesia de Santa Maria church. It was built in 15th-16th centuries and features a splendid example of gothic architecture. The church is built on the place of ancient mosque and reminds of the victory in the battle against Moors, who have ruled the city for a long time. Wonderful valleys and public gardens have been created ... Open »
Benidorm
Fantastic climate, modern buildings, fascinating and stylish luxury hotels and resorts, amazingly white sand on clean beaches – all these factors make Benidorm unbelievably attractive in the eyes of tourists, making them visit this place again and again. This town is also famous for a huge park of water attractions named Aqualandia. Another park, Mundomar, is located ... Open »
Almeria
One more important medieval building is the Cathedral that was built in the middle of the 16th century. During the medieval period the city was often ambushed by pirates and the Cathedral saved lives of the locals many times. The Cathedral looks more like a castle or a fortress than a religious shrine. It was destroyed several times, so some parts of it are made in different ... Open »
Albacete
In Chinchilla de Monte-Aragon township you can see a castle, which was built yet in the 15th century. Another wonderful example of Mauritanian architecture can be found in Cuenca district. When you get tired of watching historical sights, it’s high time to visit numerous restaurants and enjoy the skills of local chiefs. In Albacete there are many cinemas, sports centers, and ... Open »

All about La Palma, Spain - sightseeings, attractions, touristic spots, architecture, history, culture and cuisine. Prepare your trip together with OrangeSmile.com - find out the 'must see' things in La Palma, which places to visit, which excursions to take, where the breathtaking views are waiting for you. Planning your trip with this travel guide will help your to get the most out of La Palma in few days.