Detailed hi-res maps of Santa Cruz for download or print 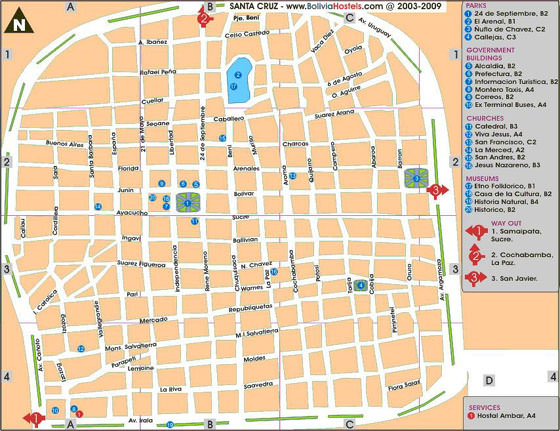 The actual dimensions of the Santa Cruz map are 854 X 657 pixels, file size (in bytes) - 113042. You can open this downloadable and printable map of Santa Cruz by clicking on the map itself or via this link: Open the map.

Search for services, infrastructure and sights on map of Santa Cruz

Our guide chapters over Santa Cruz

In the nearby town of Puerto de la Cruz, you can visit an excellent Archaeological Museum. Currently, its exposition includes more than 2600 pieces, among which are artifacts related to different periods of the development of the Guanches culture. Vintage jewelry, ceramics, and various cult artifacts have been discovered directly on the island of Tenerife. The museum occupies an old fisherman's house, built in the … Open

Maps of Cordoba
Where can be held a festival dedicated to guitar, the national Spanish musical instrument, if not in Cordoba? The event is called Festival de Córdoba-Guitarra and starts in late June, ending at the beginning of next month. The best guitarists from all over the world come to the city at this time to show all their skills of playing the instrument - not only the classical ... Open »
Maps of Andalusia
Andalusia is known as a major center of olive oil production; cultivation and processing of olives also remains an important national craft. Andalusia is the largest oil producer in the world. Every year in mid-November, locals celebrate the Festival of olives. The festival is held Baena that is proudly called the capital of olives. The program of the festival lasts for ... Open »
Maps of Granada
The language in Granada is Spanish with a predominance of some words that exist only in this city (for example, the word "bulla" means "to hurry", and "encantar" translates as "to be comfortable"). The most common products are fish, seafood, eggs. Of course, it's worth trying tortilla, which is one of the symbols of Granada. Here it has its own characteristics - mutton brains ... Open »
Maps of Malaga
In March, Malaga holds an interesting historical festival called the Capture of Gaussian. The small ancient town Gaussian became famous for the fact that its inhabitants fought back the army of the French conquerors at the beginning of the 19th century. For more than 200 years a magnificent celebration is held in Malaga in honour of this important historical event. On a ... Open »
Maps of Nerja
An equally significant event is the Feria de Nerja, a fair that opens in early October. This is one of the brightest events held in the "City Of Caves" (as Nerja is often called). The central district of the city becomes the venue: the day-time fair covers Plaza Tutti Frutti and Calle Antonio Millon. Rides and concert venues can be found around Los Huertos del Sevillano and ... Open »
Maps of Marbella
At the end of February in Marbella starts the traditional carnival dedicated to seeing off the winter, it ends in March. This festival is attended by thousands of local residents, during the days of the carnival you can meet people dressed in the most incredible costumes on the city streets. The festival is attended by music and dance groups, there are interesting ... Open »
OrangeSmile.com - online travel reservation expert providing reliable car rental and hotel booking services. We feature more than 25.000 destinations with 12.000 rental offices and 200.000 hotels worldwide.
Secure Server