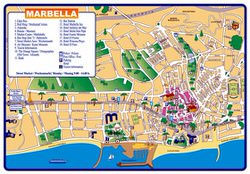 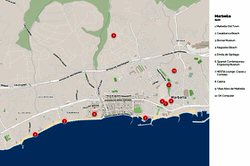 Interactive maps of hiking and biking routes around Marbella

1. You can zoom in/out using your mouse wheel, as well as move the map of Marbella with your mouse.
2. This interactive map presents two modes: 'Biking Routes' and 'Hiking Routes'. Use the '+' button on the map to switch between them.

This Marbella map has two modes: 'Railway Network' and 'Landscape & Rural Map'. Use the '+' button on the map to navigate.

Our guide to Marbella

Traditions and mentality of Marbella

In July, one of the largest music festivals in the region, Starlite Festival Marbella, is held here. It lasts for at least two weeks, the city is also equipped with special outdoor areas for a musical festival. The festival is attended by performers of various genres, from classical orchestras to pop and rock music. There are always fairs near the concert venues, so guests of the festival can combine musical … Open

An attractive tourist destination is the Puerto Banus port area. It is perfect for walks and photo sessions. Here you can admire snow-white yachts, order an interesting sea excursion or just relax in one of the cozy restaurants and taste specialties from seafood. On the territory of the port, there are also preserved historical buildings. The most interesting is the old tower. In the evening, the port area is … Open

The Constitution Park is equally beautiful. It is located nearby and attracts tourists with its variety of beautiful landscape decorations. The park contains many flowers, extraordinary trees, and green lawns where you can play ball with the children. Many pleasant surprises await kids in this picturesque park. There is a large playground for them and a pond where they will also be able to feed the fishes. One … Open

Marinabanus shopping centre is particularly popular with young people. A significant part of the stores located in the shopping centre belong to the middle price category, it has large stores h&M, Bershka and Zara brands. Next to clothing stores, there are large pavilions with cosmetics and perfumes that are sure to interest women, and there are several inexpensive restaurants and cafes in the shopping centre. … Open

Marbella will also please gamblers, there are several small establishments in the city where you can try your luck on slot machines. However, there is also a large casino "Casino Marbella", where visitors can play card games, roulette and slot machines are also available for them. In addition to interesting entertainment for gamblers, there is a fine restaurant of local cuisine-it is worth noting that many tourists … Open