«« BEGINNING - PART I
Video of flights over top monuments of Los Angeles in HD format.
Use 'Full Screen' mode.
Hollywood Sign, Griffith Observatory, City Hall, Cathedral of Our Lady of the Angels, The Dorothy Chandler Pavilion, Museum of Modern Art, and Beverly Wilshire Hotel are the main candidates that compete for the title of the major architectural symbol of Los Angeles. Just like in the first part of the guide, you can watch each monument by viewing its colorful 3D model in the Los Angeles flyover video on the left. Don’t forget to access our photo gallery and an overview of interesting facts regarding every monument. The map of the most important architecture sights of Los Angeles (located below this guide) will help you to create your own sightseeing tour through Los Angeles. 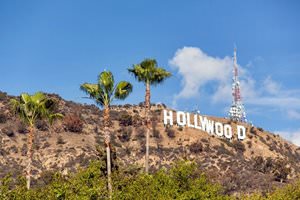 Facts:
» The Hollywood Sign, one of the symbols of Los Angeles, is a famous commemorative sign on the Hollywood Hills.
»  The sign is widely known and has become a trademark of the entire US film industry.
»  The sign was created in 1923 and has been repeatedly vandalized and then restored throughout its history. Now it is protected with a modern security system.
»  The sign makes frequent appearances in films and TV shows shot in or near Hollywood.
»  During the New Year’s celebrations on January 1, 2000, the Hollywood Sign was illuminated with lots of multi-colored lights. 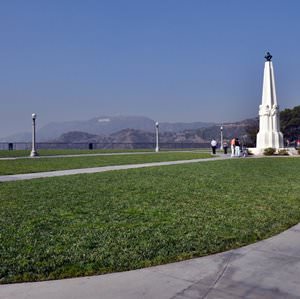 Facts:
» The creation of the Griffith Observatory opened in 1935 was funded by Jenkins Griffith. This is one of Los Angeles’ most popular attractions.
»  The observatory is located on the southern slope of Mount Hollywood in Griffith Park named after Jenkins Griffith because he gave this land to the city gratis so that a park and observatory would be built there.
»  The central planetarium demonstrates a 30-minute show called In the Center of the Universe revealing the mysteries behind space objects. The observatory also has exhibition halls where space-related exhibits are displayed.
»  When the weather is good, the city’s downtown, Hollywood, and the Hollywood Sign can be well seen from the top of the observatory.
»  Telescopes are installed all over the planetarium and observation platforms and can be used by anyone. In the evening, the roof of the observatory is opened and all visitors can use the telescope. 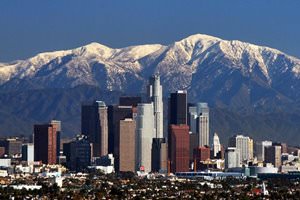 Facts:
» Los Angeles City Hall is a famous building housing the mayor’s office and is one of the most popular landmarks of the city.
»  The 32-story 138-meter building was built in 1928.
»  The City Hall has an observation deck located on the 27th floor. It is always open to the public.
»  Great earthquakes often occur in Los Angeles, so the building was made seismically stable. Thus, the building can withstand an 8 magnitude earthquake.
»  City Hall is pictured on a Los Angeles Police badge.

Cathedral of Our Lady of the Angels, Los Angeles 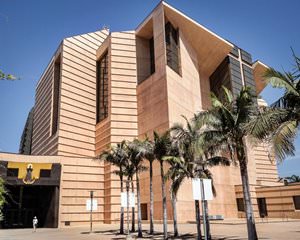 Facts:
» The Cathedral of Our Lady of the Angels was designed by Raphael Moneo and built in 2002. The cathedral was erected on the site of a Catholic church destroyed by the severe earthquake that struck Los Angeles in 1994.
»  The cathedral is architecturally unique: there is not a single right angle in the entire structure!
»  The size of the temple is truly impressive. About 3,000 parishioners can simultaneously gather here.
»  It is interesting that the church has its own mausoleum in which anyone can buy a burial place. All money earned from that is used to keep the cathedral in good condition.
»  Near the postmodern church, there is a park decorated with statues of people and animals, some of which are biblical. 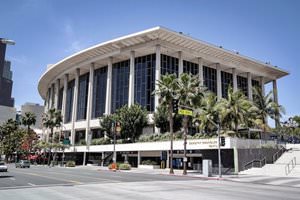 Facts:
» The Dorothy Chandler Pavilion is the place where the Los Angeles Opera performs.
»  The concert hall was named for Dorothy Buffum Chandler. Largely thanks to her funding, help, and efforts, the concert hall was completed already in 1964.
»  Before the concert hall was even built, Dorothy Chandler promised the city authorities that there would be a day during the year when citizens would be able to attend its events for free. And she kept her promise: the pavilion is open to the public every Christmas Eve when music plays here and dance groups from all over Los Angeles County perform onstage.
»  From 1969 to 1987, the Dorothy Chandler Pavilion traditionally hosted the Academy Awards.
»  Oscar statuettes were also awarded here from 1990 to 1994, in 1996, and finally in 1999. 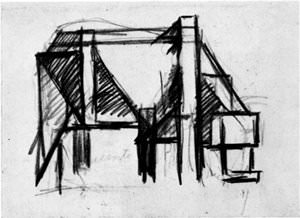 Facts:
» The Museum of Contemporary Art in Los Angeles is considered one of the best art museums in the United States.
»  The museum is dedicated to contemporary art – paintings, sculptures, graphics, pieces of applied art. The main requirement works should meet to get there is to date from 1940 or later.
»  In addition to permanent exhibitions, the Museum of Contemporary Art also has temporary exhibitions, many of which become high-profile events in the cultural life of the country. Furthermore, art lectures and other educational programs are held here.
»  The Museum of Contemporary Art has over 5,000 exhibits in its collection, and the number is constantly growing.
»  It's interesting that there are no restrictions on the style of works present in the museum. Here you can see pop art, abstract expressionism, visual art as well as photography.

Facts: » The Beverly Wilshire Hotel was built by Walter G. McCarty on the site of the former Beverly Hills Speedway in 1928.
»  The historic hotel was built in the shape of letter E. The Italian Renaissance style used in the hotel design perfectly fits the modern setting of Los Angeles and gives the building even more grandeur contrasting with the surrounding architecture.
»  The facade of the building is faced with special expensive Tuscan stone and Carrara marble.
»  The hotel has a famous restaurant called Cut. There are also a pool and tennis courts.
»  Lots of renowned people have stayed at the hotel, including Elvis Presley, John Lennon, Barack Obama, Elton John, Robert Pattinson, Al Pacino, and others.
»  It was in this hotel that Pretty Woman, the world-famous American movie, was shot in 1990.

This guide to architecture monuments in Los Angeles is protected by the copyright law. You can re-publish this content with mandatory attribution: direct and active hyperlink to www.orangesmile.com.
Los Angeles - guide chapters 1 2 3 4 5 6 7 8 9 10 11

Plan your own tour over Los Angeles on the monuments map

Search for architecture monuments of Los Angeles on the map

Tours through neighbours of Los Angeles

Las Vegas
Bellagio is a five-star hotel and casino located in the Las Vegas Strip. The main attraction of Bellagio is a musical fountain in front of the hotel. The hotel was built at the site of the legendary Dunes hotel and casino bought by Steve Wynn and demolished in 1993. Initially, the project was estimated at $1.6 million. Bellagio was festively opened on 15 October 1998. In Bellagio, there is a botanical garden and a special exhibition hall ... Open »
San Francisco
The City Hall is the administration building of San Francisco built in 1915 on the site of the original structure that was destroyed in a massive earthquake in 1906. The dome of the administration building is the fifth largest in the world. During working hours on weekdays entrance to the building is free. In the evening and on weekends premises of the building can be rented for banquets, meetings and ceremonies. You can register the marriage ... Open »
Seattle
The locals call the skyward construction a needle. It differs from others in its subtlety and beautiful shape. The 184-meter futuristic tower was erected in 1962. It is part of the Seattle Center exhibition complex. During the international exposition, 20,000 people visited the top floor of the building every day. A figure of 2.3 million people was recorded – those who managed to get to the top during the World’s Fair. The ... Open »
Vancouver
The technologically advanced building is the museum called Science World. It is the whole “town” divided into six pavilions. Each gallery is decorated in its particular style. In “Eureka”, you can play and experiment with exhibits. These items can make you comprehend the physical laws of light, sound, and water. In “Illusion”, you can learn about the sense of pictures and how the brain changes the vision of them, although straight ... Open »
Calgary
The 190-meter tower was built to celebrate the hundredth anniversary of Canada. The construction cost $3 500 000. The total weight of the tower s over 10 tons. In 1971, it was named “Calgary Tower”. The skyscraper is seismically stable and can withstand earthquakes and wind speed of 161 kmh. It had been constructed for a year and 3 months. The building is cylinder due to the continuous filling of concrete mixture. In the Husky ... Open »
OrangeSmile.com - online travel reservation expert providing reliable car rental and hotel booking services. We feature more than 25.000 destinations with 12.000 rental offices and 200.000 hotels worldwide.
Secure Server