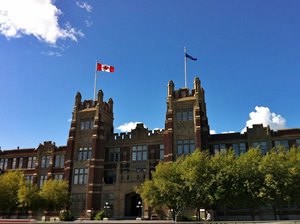 Let’s continue our virtual walk in Calgary and its most prominent architecture monuments. This time, we will focus on such breath-taking sights as Scotiabank Saddledome, McMahon Stadium, Telus World of Science, Fort Calgary, Baitun Nur and many others. For many people, the cultural and historical vibe of these monuments defines the atmosphere of not only Calgary, but also Canada in general. We will make a virtual 3D tour to every monument, look at it from a bird’s eye view, and browse the most interesting facts that have defined the history of Calgary. The photo gallery and maps are the cherry on the cake! 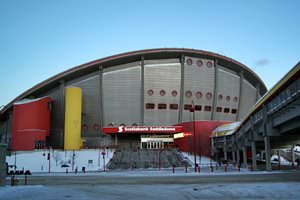 Facts:
» Scotiabank Saddledome is an indoor sports center.
»  Up to 20 000 people can watch matches or performances of foreign bands here.
»  The size of the stadium is appropriate for entertainment shows, meetings, and sports competitions in different kinds of sport, e.g. ice hockey, Canadian curling tournaments, or rodeo. Here, players competed in lacrosse (the team game with using a small rubber ball and a stick).
»  The record number of fans (362 227) was reported in the season of 2004/5.
»  The stadium is also a home arena for the local hockey club. Here, international skating competitions between Olympians were held.
»  After the reconstruction in 2000, the management changed the name of the stadium to the Canadian Airlines Saddledome.
»  The Dalai Lama made his speech from the stand.
»  The construction cost almost С$98 million.
»  The best spectators’ sears are the first ten rows. All the seats are situated on a flat surface. So, it is difficult to watch the game from distant rows due to spectators sitting closer to the field. If necessary, chairs are removed to increase the number of spectators. 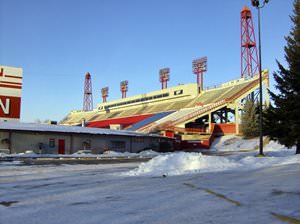 Facts:
» The sports arena was completed on donations of $300 000 from the McMahon brothers. It is named after them.
»  Players of the Canadian football league train at the McMahon Stadium.
»  The complex started to be built in 1960.
»  It is located near the University of Calgary in the city center. The McMahon Stadium belongs to the educational institution.
»  Up to 36 000 visitors can watch spectacular competitions at the same time.
»  Due to climate conditions, only artificial ice can be used here. Synthetic ice consists of many polymer slabs, due to which participants of competitions don’t worry about skating.
»  The 15th Winter Olympic Games were held here in 1988.
»  The total area of the football pitch is 100х60 m.
»  Spectators’ seats are painted white, blue, and red. They are divided into sectors. There is a sector for families with children.
»  There are powerful spotlights outside for better visibility when it gets dark.
»  At the entrance on the wall panel, you can see the silhouette of the running horse. 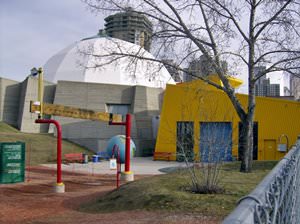 Facts:
» The research center has promoted science among the young for over 40 years. The unusual museum is aimed at interesting visitors in the world of science with interactive exhibits and the demonstration of objects’ properties.
»  There are not only visual exposures. Here, teaching techniques are developed and master classes in the formation of imagination and inquisitiveness.
»  The TELUS World of Science is annually visited by over 300 000 people.
»  The center is divided into several themed sectors.
»  In the Creative Kids Museum, there is a special musical instrument. When you hit piano keys, it not only sounds. Bubbles start trembling in its upper part of illuminated tubes. This is how you gain acoustic and visual experience.
»  In the other sector, experiments with gravity, capsizing, and water flows are conducted.
»  At the “Earth & Sky” exhibition, you can hear the echo in the gorge, “detect” the noise of drops, and “save” animals from the avalanche.
»  The “Being Human” Station will acquaint visitors with how the brain reacts to different irritants and how the baby forms. 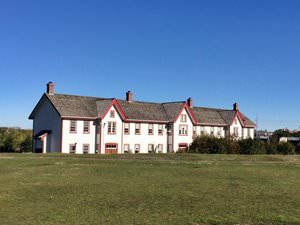 Facts:
» There is a fort in Calgary. It was patrolled by mounted police.
»  The first log building was constructed of pines and spruces caught from the river by the patrol. In the building, there is a rest room and a guards’ room. There are stables and outbuildings near it.
»  The fort prevented the illegal American alcohol import and distribution in the territory of the city.
»  Originally, the fort was called “Elbow”. It gained its present name only in 1876.
»  The fort was guarded by several people 4 years later. There was no need in military stocks when the roadway was built here. In 1014, the company bought the land to build its terminal.
»  The first constructions were demolished. Only the Deane House has survived. It has served as a warehouse for many decades.
»  The building has also served as a museum and gained the status of the historic monument since 1978. Archaeological excavations, during which original wooden boards and other artifacts have been found, were conducted. You can see them in the museum. There is also the model of the first fort.

Facts: » The center of Islamic culture is the city mosque. The religious institution of this type is the highest in Canada.
»  Baitun Nur can accommodate three thousand worshipers at the same time.
»  The mosque called the House of Light had been built for three years since 2005. In 2008, the opening ceremony was visited by 5 000 people.
»  The construction cost С$8 million. The funds were donated by the members of the Muslim community.
»  The total area of all the halls is 4 500 m2.
»  The tower where worshipers start to pray is almost 30 m high. The roof of the minaret and the mosque is covered with steel sheets.
»  On the entire facade, the name of Allah is written 99 times. This number of names is enshrined in the Koran.
»  From the outside, Baitun Nur is faced with white stone.
»  The prayer room is decorated with lamps. The chandelier weighs 400 kg. It cost $50 thousand.
»  In the great mosque, there are classrooms and an office. Here, visitors can learn about the beginning and basics of Islam. There are also playrooms for children. There is a kitchen. Сonferences are held in the community center.

Facts: » It is impossible to imagine today’s Calgary without the Suncor Energy Center, the landmark of the city. Two twin towers are office buildings.
»  They are faced with red granite delivered from Finland. The first building is 52-storey and its copy has 32 storeys. Skyscrapers were built in 1984. They make a uniform architectural complex.
»  The western skyscraper has a total area of 2 million m. There are business offices and shopping centers. The tower is 706 ft high.
»  The Suncor Energy Centre is designed in accordance with the high-technology project and is environmentally friendly. It even has received the corresponding certificate for the energy and ecology solution.
»  There is a recreation area around skyscrapers. Landscape designers worked on it.
»  The towers are linked with a transparent soffit inside the buildings by a non-covered four-level area.
»  There is also a swimming pool. Here, you can see a bronze torch symbolizing the Olympic Flame. An airplane is hanging from the ceiling. The area has special climate control equipment.
»  The rooms of the center are rented by big industrial companies. There are 27 such organizations.

This guide to architecture monuments in Calgary is protected by the copyright law. You can re-publish this content with mandatory attribution: direct and active hyperlink to www.orangesmile.com.
Calgary - guide chapters 1 2 3 4 5 6 7 8 9 10 11

Plan your own tour over Calgary on the monuments map 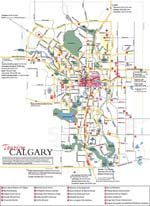 Search for architecture monuments of Calgary on the map

Tours through neighbours of Calgary

Edmonton
The building was being built for administrative needs from 1907 to 1912. The exterior is typical for state institutions of that period and distinguished by the neoclassical style. Two types of natural stone were used for the exterior. The lower part of the building is granite. The upper part and columns are covered with sandstone. The rotunda was constructed of over 2 000 tons of marble. Each cylinder weighs 16 tons. The pillar is cut from a ... Open »
Vancouver
The technologically advanced building is the museum called Science World. It is the whole “town” divided into six pavilions. Each gallery is decorated in its particular style. In “Eureka”, you can play and experiment with exhibits. These items can make you comprehend the physical laws of light, sound, and water. In “Illusion”, you can learn about the sense of pictures and how the brain changes the vision of them, although straight ... Open »
Seattle
The locals call the skyward construction a needle. It differs from others in its subtlety and beautiful shape. The 184-meter futuristic tower was erected in 1962. It is part of the Seattle Center exhibition complex. During the international exposition, 20,000 people visited the top floor of the building every day. A figure of 2.3 million people was recorded – those who managed to get to the top during the World’s Fair. The ... Open »
San Francisco
The City Hall is the administration building of San Francisco built in 1915 on the site of the original structure that was destroyed in a massive earthquake in 1906. The dome of the administration building is the fifth largest in the world. During working hours on weekdays entrance to the building is free. In the evening and on weekends premises of the building can be rented for banquets, meetings and ceremonies. You can register the marriage ... Open »
Las Vegas
Bellagio is a five-star hotel and casino located in the Las Vegas Strip. The main attraction of Bellagio is a musical fountain in front of the hotel. The hotel was built at the site of the legendary Dunes hotel and casino bought by Steve Wynn and demolished in 1993. Initially, the project was estimated at $1.6 million. Bellagio was festively opened on 15 October 1998. In Bellagio, there is a botanical garden and a special exhibition hall ... Open »
OrangeSmile.com - online travel reservation expert providing reliable car rental and hotel booking services. We feature more than 25.000 destinations with 12.000 rental offices and 200.000 hotels worldwide.
Secure Server