Sightseeing in Portland - what to see. Complete travel guide 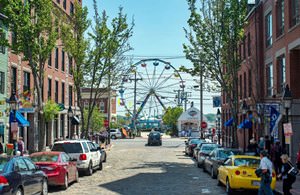 In the United States, there are two cities with the same name – Portland. Both the cities are attractive and each of them has something to offer to travelers. That being said, Portland in the state of Oregon deserves particular attention of vacationers. Perhaps, the unusual look of local people is the first thing that tourists notice after their arrival. It is not rare to see men with blue beards, pedestrians wearing antique clothes, cyclists without clothing, and many other interesting people. Besides eccentric citizens, Portland is proud of its numerous attractions, many of which are very old. Finally, don’t forget to try local beer because it is really great.
The Chinook people were the indigenous inhabitants of the region. This tribe was actively fishing and then selling their catch on the riverbank. Women were mostly picking berries and searching for different tuberous vegetables. In 1843, William Overton saw potential in this area and decided to establish a commercial settlement here. However, Overton lacked money, and so he had to make an agreement with a partner from Boston, Asa Lovejoy. The official registration of the settlement as a new town took place in 1851. Portland started rapidly developing.
In 1891, the commercial center became so big that the nearby towns of Albina and East Portland merged with it. Twenty-four years later, the same happened to two more towns, namely, Linnton and Saint Johns. Over a span of one century, Portland was the main port in the country. The city was flourishing until the opening of the railway from the port of Seattle. After this, the importance of Portland vanished. However, the city managed to remain one of the major wood processing centers in the country for many decades. The city got most of its infrastructure in the 70s of the 20th century. This has significantly changed the look of Portland. Copyright www.orangesmile.com
The Oregon Zoo is one of the most visited places in the city. This is one of the oldest zoos in the country. The zoo is open in the old Washington Park that also has a Japanese garden and an arboretum. The park is so big that there a small railroad, and a train takes visitors to different parts of the park. As expected, children are very excited to get around on a train. The zoo opened in 1888. Initially, there was only one animal here – the Grizzly bear rescued by local pharmacists. However, the zoo started growing in size quickly, expanding to half of the park’s territory. 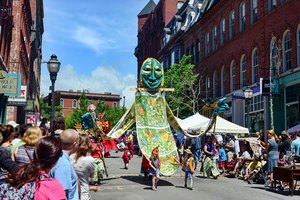 Nowadays, the Oregon Zoo has become home to animals from savannah and tropical forests. Besides them, there are the indigenous animals of Asian forests and fields. In total, more than two thousand species of animals and more than two hundred and fifty species of birds live in the zoo. Twenty-one species are almost extinct. All animals live in conditions close to their natural habitat, so the zoo is comfortable for them. Unlike many other zoological gardens, birds here do not live in cages. There is a separate area for them here – the botanical garden. In short, don’t be surprised to see colorful tropical birds or a pelican when admiring orchids.
How about visiting a true rose paradise? Portland is often referred to as the city of roses. This name is not random. The city is home to the worldwide famous International Rose Test Garden. This is where local botanists grow exotic Portland flowers. Starting from May and until October, professional plant breeders try to get new cultivars by mixing different varieties of plants. In the blooming paradise, visitors can find approximately seven thousand different rose bushes of more than six hundred varieties. Every year, a festival dedicated to roses takes place in the garden. During the event, a team of judges examines different varieties of roses and selects the winner. 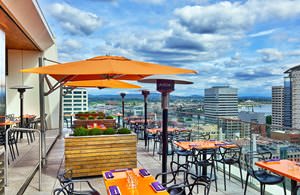 The Lan Su Chinese Garden is a tranquil place that is worth visiting during your stay in Portland. High walls protect the garden on all sides. This is a new garden, it opened in 2000. The beautiful piece of nature occupies an area of roughly four thousand square meters. The rocks weighing five hundred tons and stones were brought directly from China, from the Lake Taihu region. Just like the building materials, most plants are also indigenous to China and were delivered from this country. The age of some plants is more than one hundred years. A manmade lake in Lan Su Chinese Garden makes this area particularly charming.
Travelers from Europe and many other regions of the world usually fly to a major US international airport first and then take a domestic flight to Portland. A connecting flight with a stop in Los Angeles is the most popular choice. The total journey time is up to fifteen hours when traveling from Europe. The second part of the journey is shorter – only two and a half hours. Upon arrival at the airport in Portland, simply get on a commuter train that goes to the city center.
This guide to iconic landmarks and sights of Portland is protected by the copyright law. You can re-publish this content with mandatory attribution: direct and active hyperlink to www.orangesmile.com.

City tours, excursions and tickets in Portland and surroundings

Shopping streets in Portland
♥   Shopping area ' Pioneer Place' Portland, 0.5 km from the center. On the map

♥   Shopping area ' Pearl District' Portland, 0.9 km from the center. On the map

♥   Shopping area ' Northwest District' Portland, 7.7 km from the center. On the map

National and city parks around Portland
♥   State Park 'Chapman' , 0.9 km from the center. On the map

Art galleries in Portland and around
♥   Art museum 'Portland Art Museum' Portland, 0.9 km from the center. On the map

Sights around Portland from our guide 'Extreme places on Earth' 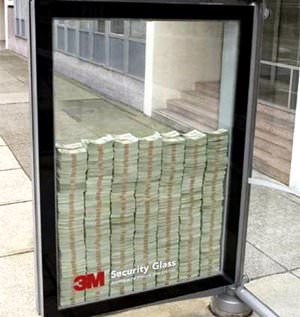 Distance from Portland center - 13.1 km.
Unfortunately, no one in the city got rich with this advertising campaign, the glass was really incredibly firm. Hundreds of people tried to break the constructions day and night, but they did not succeed. The investment in the original advertising stock has formed about 6,000 US dollars. The value of the unique Glass of Security Glass Society can not be compared with the advantages it can bring to people. … Read further

Search touristic sites on the map of Portland

Sightseeing in regions nearby Portland

Seattle
Seems, everyone has heard at least once about “the city of rains” located in the United States. This city is Seattle, which is situated on the north-west of the continent. However, the city is named so not because of the fact that the level of precipitations is the highest here. The reason for this is in the number of cloudy days per year, which is the highest comparing to ... Open »
Vancouver
The old part of the city is represented by Gastown. The buildings in this region were created by first settlers. During your walks on paved roadways you will see ancient houses made of burnt brick – the most durable and popular material of those days. The hanging bridge is surely no less interesting and attractive as this is a unique architectural solution. Not far away from ... Open »
Sacramento
Two Native American groups of people – Nisenans and Modoc – were the first settlers on the territory of modern Sacramento. These people were mostly hunting and gathering food to survive. In 1799, the Spanish arrived in this land and started thoroughly exploring the region of modern California’s capital. Gabriel Moraga was the leader of this exploration team. He was ... Open »
Banff
Banff is a town in the province of Alberta approximately 110 km from Calgary. The town is located within the Banff National Park. This is a popular resort destination for Canadians and guests of the country. Banff National Park is the oldest national park in Canada. The Rocky Mountains surround the beautiful area, creating mesmerizing views. When looking at this enchanting ... Open »
San Francisco
The famous Alcatraz Island is the main landmark of this place. Located in the bay of San Francisco, in the past the island has been used as the naturally isolated military defense fort and the prison for dangerous criminals. Among other attractions are the beautiful suspension bridge named Golden Gate; Coit Observation Tower, which observation platform located on19th floor ... Open »
Calgary
First mentions of Calgary appeared in 1875. Nowadays this is a modern resort, the largest megalopolis of the country and the cultural capital of Canada. The city attracts people who enjoy active rest as on its territory are located numerous sports facilities. Multiple shops, restaurants and museums, shadowy valleys and parks – all these factors are truly good for comfortable ... Open »

All about Portland, USA - sightseeings, attractions, touristic spots, architecture, history, culture and cuisine. Prepare your trip together with OrangeSmile.com - find out the 'must see' things in Portland, which places to visit, which excursions to take, where the breathtaking views are waiting for you. Planning your trip with this travel guide will help your to get the most out of Portland in few days.