Sightseeing in Santa Monica - what to see. Complete travel guide 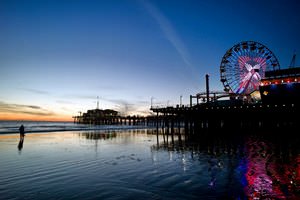 Santa Monica is a city that combines the elements of ancient and modern. This place attracts tourists by its practically year-round sunny days (325 days a year), a magnificent beach at the Pacific Ocean coast and the great diversity of nature.
Cuisine of Santa Monica for gourmet with top restaurants and cafe
Santa Monica, a small beachfront city, offers its guests plenty of marvelous restaurants and cozy cafes which are scattered all over the city and located in every shopping center. In the …

Open
Santa Monica is not a cheap resort. This is the birthplace of famous actors Robert Redford, Sean Austin, Judy Lockhart, as well as of the founder of MySpace - Tom Andersen. Santa Monica is one of the most visited parts of the city. Here are located amusement parks and recreation zones. The autumn festival Taste of Santa Monica also takes place here once a year. Here you can taste different dishes and drinks from different restaurants.
The Old City part of Santa Monica is represented by the statue of the patroness of the city and the surrounding architectural constructions including antique carousels, the hippodrome and the old Shangri-La hotel. In the city there are such museums as Museum of Arts and Heritage Museum, as well as the old cinema theatre named Majestic and the modern operating cinema theaters Criterion Theater, Aero Theater, and Ten Santa Monica Promenade. Copyright www.orangesmile.com
Authentic traditions, festivals and lifestyle of Santa Monica inhabitants
One of the main distinctive features of the city of Santa Monica is a welcoming and easy atmosphere. The resort is heavily visited by tourists from all over the world. Local residents treat …

Open
Ocean Ave street can give you a fascinating tour. Numerous shops, restaurants, and entertainment venues are located nearby. One of the main symbols of the city - a beautiful sculpture of St. Monica is also there. The street runs along the beach. During the morning hours, you can often meet locals and tourists out jogging. 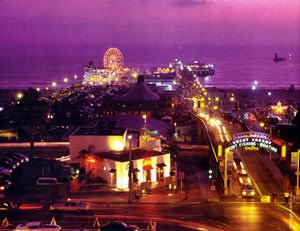 All Linkin Park fans should definitely find a small beautiful park, located on a cross of Lincoln and Wilshire. Not everyone knows that it was in honor of this park that the world-famous band got its name. Today, one can admire its tall, slender palm trees. Sometimes, street artists arrange their enchanting performances outside.
Excursion over cultural sights of Santa Monica - 'must visit' points of interest
The most touristic and much visited destination of the resort city of Santa Monica is the Promenade accumulating a major part of entertainment establishments, stores, restaurants and bars. …

Open
Lovers of nature prefer Tongva Park, located close to the pier. Many tourists pass it on their way to the beach. The park is really attractive with its spectacular landscaping, lots of exotic plants and flowers. There are several excellent observation platforms there. They open a wonderful view of the pier and the ocean. 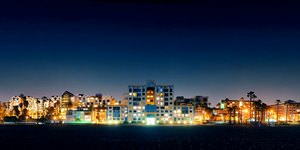 Travelers with children will be interested in visiting Santa Monica Aviation Museum. It presents a huge collection of flying machines of different times. Here, you'll see old military aircraft and fine restored personal planes of some celebrities. All machines are in excellent condition. Some of them are presented in a special hangar, others are located in the open air, on the adjacent territory. During the tour, visitors can make a lot of great photos. They're also allowed to sit in aircraft cockpits.
Your active city break in Santa Monica. Attractions, recreation and entertainment - best places to spend your day and night here
Shopping addicts and night entertainment enthusiasts should pay a visit to the pier area as the Promenade accumulates the brightest and the most remarkable entertainment establishments of …

Open
No less popular is Camera Obscura museum. It teaches visitors about the amazing world of optical illusions. The opening of the museum took place in 1898. Its amazing mirror rooms are visited by dozens of people every day for over a hundred years. It is also perfect for a family visit. Many come here to make original photos. The museum is located in a beautiful park, so you can take a pleasant stroll through it afterwards.

This guide to iconic landmarks and sights of Santa Monica is protected by the copyright law. You can re-publish this content with mandatory attribution: direct and active hyperlink to www.orangesmile.com.
Santa Monica - guide chapters 1 2 3 4 5 6

♥   Shopping area ' Montana Avenue' Santa Monica, 1.7 km from the center. On the map

♥   Shopping area ' Sawtelle Japantown' Los Angeles, 4.9 km from the center. On the map

Survived castles around Santa Monica
♥   Castle 'Battery of Santa Ana' Almería, 65.4 km from the center. On the map

National and city parks around Santa Monica
♥   Park 'Roxbury' , 8.8 km from the center. On the map

♥   Wilderness Park 'Westridge-Canyonback' , 10.3 km from the center. On the map

Sights around Santa Monica from our guide 'Extreme places on Earth' 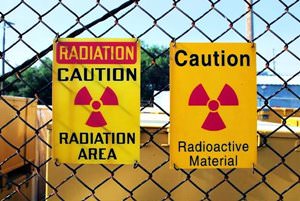 Distance from Santa Monica center - 30.2 km.
All this time, thousands of people, including scientists and industrialists with their families, were living in the territory of the laboratory. Everything that happened in the test area was kept in the strictest secrecy. Only ten years later, horrific details about the environmental situation in the region became known. Regularly dozens of employees died there. The main cause of death was cancer. The area of the laboratory is officially recognized a unique natural landmark, as ancient caves with preserved petroglyphs have been found there. … Read further 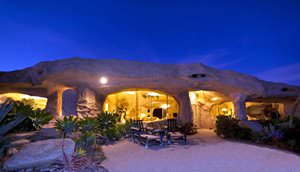 Distance from Santa Monica center - 26.9 km.
The original cottage is located in the surroundings of Malibu, not far from the coast. It is surrounded by the extensive tropical garden, from the huge panoramic windows of the house opens the beautiful view of the exotic scrub and the coast. In 2012 Dyn Clark and his wife decided to sell the original apartments in Malibu. The house of Flintstones was rated by the owners in 3.5 million US dollars. The stone-built house has the excellent modern facilities. In the house there is the bedroom with the design furniture, the excellent kitchen and two bathrooms with jacuzzi, the living room with the wood fireplace and even a large veranda. … Read further 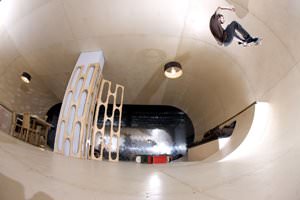 Distance from Santa Monica center - 26.8 km.
The author of the project of the unusual house in Malibu represents it as part of the large project, which is to help the houses according to the hobbies of the people to help. The author is convinced that hundreds of original houses will be built around the world over the next 25 years. In such houses, people will love the favorite sports or enjoy the other hobbies in the cozy home atmosphere. … Read further

Search touristic sites on the map of Santa Monica

Sightseeing in regions nearby Santa Monica

Beverly Hills
So called “Golden Triangle” is known as the main walking center of Beverly Hills. This triangle is made by the crossing of three boulevards – Santa-Monica, Wiltshire and Crescent Drive. Here are located all main trading centers and pavilions that feature wide choice of apparel, perfumes and jewelry. However, the prices here cannot be called cheap, so these shops will ... Open »
Hollywood, CA
The first Hollywood movie was made in 1911 in the old tavern of the town. That was the beginning of the glorious history of Hollywood as the most famous area in cinema industry. Movie making was fast developing and this led to creation of numerous clubs, restaurants, banks and other organizations. Living quarters of the town were replaced by commercial buildings, which ... Open »
Los Angeles
Los Angeles is a worldwide famous center of the film industry, as well as one of the regions of aviation industry (spacecraft, missiles, and avionics), the production of warships and airplanes. In addition to the mentioned industries in Los Angeles are well-developed such industries as automobile assembly, instrument, electrical, food, chemical, sewing, rubber, shipbuilding, ... Open »
Malibu
To the west of Los Angeles, tourists can visit a “star” city that lures guests with its entertainment and international fame. This is a true paradise for fearless surfers and divers. Malibu is also a great destination for beach recreation. Nature made a fantastic “gift” to the city, giving Malibu forty kilometers of clean beach areas. It is not rare to see a celebrity ... Open »
Long Beach
In 1881, a town named Willmore City appeared at the shore of the Pacific Ocean. However, the settlement soon changed its name to Long Beach because of a big number of spacious beaches. The name of the town precisely described this peculiarity. Long Beach has retained this name until modern times. Starting from the beginning of the 20th century, South California has been ... Open »
Anaheim
Probably, Disneyland in California is one of the most famous attraction parks in the world. It consists of 2 big projects – Disneyland Park and Disneys California Adventure Park. Here you will find several hundreds of attractions, thematic areas, and playing rooms. In Downtown Disney District you can also visit amazing shops, restaurants, and participate in engaging ... Open »

All about Santa Monica, USA - sightseeings, attractions, touristic spots, architecture, history, culture and cuisine. Prepare your trip together with OrangeSmile.com - find out the 'must see' things in Santa Monica, which places to visit, which excursions to take, where the breathtaking views are waiting for you. Planning your trip with this travel guide will help your to get the most out of Santa Monica in few days.