«« BEGINNING - PART I
Video of flights over top monuments of San Francisco in HD format.
Use 'Full Screen' mode.
Grace Cathedral, California Academy of Sciences, Ferry Building, Fairmont Hotel, and Coit Tower are the next landmarks in the review. Just like in the beginning of the review, we have prepared a collection of historic facts and some awesome photographs for each of these top architecture monuments of San Francisco. Don’t forget to admire the look of these sights from a bird’s eye view. This view is available in the flyover video of the architectural skyline of San Francisco. After such a guide, it won’t be a hassle to make up a great plan of a real-life excursion tour in San Francisco. Ready, steady, go! 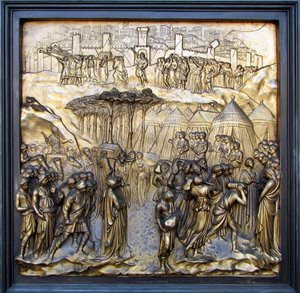 Facts:
» The Grace Cathedral was built after the earthquake and fire in 1906. Its construction lasted for 54 years.
» During construction of the church architects used all known methods for seismic resistance for it. Architects had to avoid sculptures and reliefs to decorate the facade, as they could fall in case of an earthquake.
» Interior of the Gothic Cathedral is decorated with the set of colored glasses of blue, red and yellow colors. The cathedral also features a mural depicting the history of the city and the life of Francis of Assisi that is the patron saint of San Francisco.
» Doors made of bronze represent an exact copy of the Gates of Paradise in the San Giovanni Cathedral in Florence.
» The Grace Cathedral regularly hosts concerts of organ music, yoga classes, walking through a maze drawn on the floor of the temple, and runs of a male choir. All this attracts thousands of visitors and tourists annually. 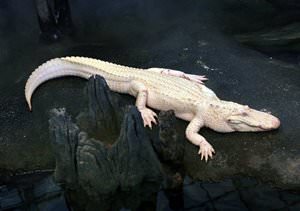 Facts:
» The California Academy of Sciences is the scientific organization, whose purpose is the systematic study of nature and collection development. It acts as a large natural history museum in Golden Gate Park.
» The Academy has one of the world's largest collection of marine animals, as well as 135,000 mammals and birds (including 96,000 specimens of birds, 28,500 mammals, and 11,000 eggs and nests).
» The California Academy of Sciences has not only scientific, office, administrative and museum departments, but also an aquarium, a planetarium, a scientific archive, a library, a botanical garden, a lecture hall, 3D-cinema, two restaurants, a terrace with a lawn on the roof, an aviary and shops.
» The Academy conducts research in various fields of science, mainly, on anthropology, marine biology, botany, entomology, herpetology, ichthyology, invertebrate zoology, theriology, ornithology, as well as other branches of biology. 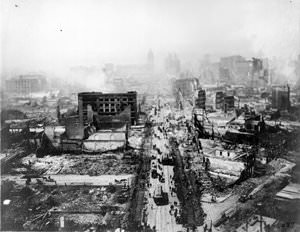 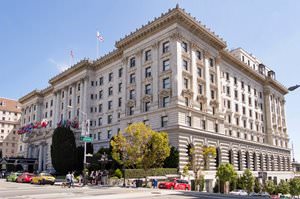 Facts:
» The Fairmont Hotel San Francisco is the five-star hotel offering luxurious accommodation. It’s located right in the city center.
» There are 591 rooms in the hotel, as well as two restaurants, cafe and a variety of shops.
» The hotel offers a full-service spa, as well as a sports club. Sport shoes are provided to visitors of the sports club.
» Some rooms have scenic views of the city or the bay. Some suites offer panoramic views of Coit Tower, Golden Gate Bridge, Bay Bridge, Transamerica Pyramid and Angel Island.
» The hotel has always been a central location for business meetings of world-class held in the city. In 1945, representatives of 51 countries have participated in the conference, which was signed by the UN Charter. 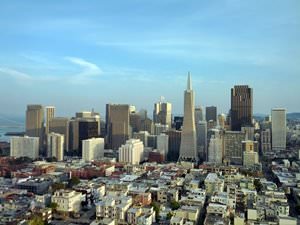 Facts:
» The Coit Tower is the tower of 64 meters, which is located at the top of Telegraph Hill in San Francisco.
» The lookout of the tower offers unique view of the city, so that’s the favorite place for tourists.
» The tower was built in 1933 and became a kind of memorial to Lilly Hitchcock Coit, the eccentric lady who was a volunteer firefighter.
» Besides panorama opening from the building, visitors of Coit Tower can enjoy the murals decorating the inside of the tower.
» Entrance to the tower is free. However, you have to pay to enter the observation deck.

This guide to architecture monuments in San Francisco is protected by the copyright law. You can re-publish this content with mandatory attribution: direct and active hyperlink to www.orangesmile.com.
San Francisco - guide chapters 1 2 3 4 5 6 7 8

Plan your own tour over San Francisco on the monuments map

Search for architecture monuments of San Francisco on the map

Tours through neighbours of San Francisco

Los Angeles
The Hollywood Sign, one of the symbols of Los Angeles, is a famous commemorative sign on the Hollywood Hills. The sign is widely known and has become a trademark of the entire US film industry. The sign was created in 1923 and has been repeatedly vandalized and then restored throughout its history. Now it is protected with a modern security system. The sign makes frequent appearances in films and TV shows shot in or near Hollywood. During ... Open »
Las Vegas
Bellagio is a five-star hotel and casino located in the Las Vegas Strip. The main attraction of Bellagio is a musical fountain in front of the hotel. The hotel was built at the site of the legendary Dunes hotel and casino bought by Steve Wynn and demolished in 1993. Initially, the project was estimated at $1.6 million. Bellagio was festively opened on 15 October 1998. In Bellagio, there is a botanical garden and a special exhibition hall ... Open »
Seattle
The locals call the skyward construction a needle. It differs from others in its subtlety and beautiful shape. The 184-meter futuristic tower was erected in 1962. It is part of the Seattle Center exhibition complex. During the international exposition, 20,000 people visited the top floor of the building every day. A figure of 2.3 million people was recorded – those who managed to get to the top during the World’s Fair. The ... Open »
Vancouver
The technologically advanced building is the museum called Science World. It is the whole “town” divided into six pavilions. Each gallery is decorated in its particular style. In “Eureka”, you can play and experiment with exhibits. These items can make you comprehend the physical laws of light, sound, and water. In “Illusion”, you can learn about the sense of pictures and how the brain changes the vision of them, although straight ... Open »
Calgary
The 190-meter tower was built to celebrate the hundredth anniversary of Canada. The construction cost $3 500 000. The total weight of the tower s over 10 tons. In 1971, it was named “Calgary Tower”. The skyscraper is seismically stable and can withstand earthquakes and wind speed of 161 kmh. It had been constructed for a year and 3 months. The building is cylinder due to the continuous filling of concrete mixture. In the Husky ... Open »
OrangeSmile.com - online travel reservation expert providing reliable car rental and hotel booking services. We feature more than 25.000 destinations with 12.000 rental offices and 200.000 hotels worldwide.
Secure Server