Sightseeing in San Francisco - what to see. Complete travel guide 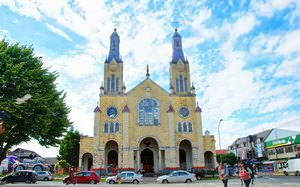 One of the most beautiful cities in California - San Francisco - is located near the coast of Pacific Ocean. The architectural ensemble of the city combines culture, traditions and customs of various peoples and countries. In San Francisco are well-developed automotive and petrochemical industry, shipbuilding and aircraft construction. Located between the strait, the gulf and the ocean, this city is famous for the development of commercial shipping and great service industries. On the territory of the city is located the famous Silicon Valley, where are headquartered companies that are known as world leaders in the electronics industry, Internet resources, and more.
Excursion over cultural sights of San Francisco - 'must visit' points of interest
The city of San Francisco will be of great pleasure to visit for those tourists who love bright and engaging excursions and city exploration. Many city landmarks and sites are of global …

Open
The famous Alcatraz Island is the main landmark of this place. Located in the bay of San Francisco, in the past the island has been used as the naturally isolated military defense fort and the prison for dangerous criminals. Among other attractions are the beautiful suspension bridge named Golden Gate; Coit Observation Tower, which observation platform located on19th floor features panoramic views of the city's largest Golden Gate Park artificially landscaped with plants, flowers and trees; visitors may also enjoy visiting Monterey Island famous for its amazing beaches.
The ancient cable car system is an icon of the city. This unusual public transport was established as far back as 1873. It is a bit like a funicular. The old tram has long been a popular tourist attraction. In the middle of the 20th century, the actively developing city wanted to abandon this type of transport, which lost its original meaning. However, local residents succeeded in asserting this unusual historical symbol. Copyright www.orangesmile.com
Your active city break in San Francisco. Attractions, recreation and entertainment - best places to spend your day and night here
City guests will not lack entertainments and ways to spend time as it can be claimed beyond a doubt that the city of San Francisco offers the richest choice of entertainments meeting each …

Open
Lombard Street is really beautiful and unusual place. The street itself is a small stretch of a highway on the Russian Hill with a length of 400 meters. This street is one of the most winding in the world. Travelers are attracted here by incredibly beautiful flower beds on both sides. The road surface is made of red brick, which makes the street even more unique. 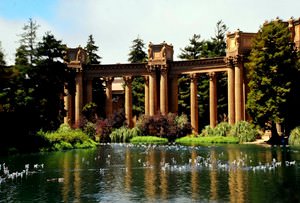 Painted Lady architectural complex lies in the historic district of San Francisco. This is the title of several Victorian villas located next to each other and that managed to survive during the devastating earthquake of 1906. The historical buildings own this name due to the bright color of the facades. Such an exterior was acquired during the reconstruction in 1963.
Advices to travellers: what you should know while being in San Francisco
1. Sparing tourists should keep in mind during a vacation in San Francisco that city museums are free to visit several times per month. All tourist information offices provide all the …

Open
Amateurs of hiking should definitely visit Chinatown quarter. This is real China in miniature, which will please with unusual architecture, specialized restaurants, and shops with goods from China. This area began to emerge in the middle of the 19th century. Refugees from China built their homes here. During the existence, it retained many interesting architectural monuments. Now, Chinatown is known for its numerous noteworthy cultural centers and museums. 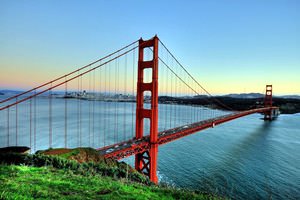 The most unusual religious landmark of San Francisco is Grace Cathedral. Its construction began in 1906 and was completed in the second half of the 20th century. Nevertheless, it is difficult to imagine that the building is new. The Cathedral is created in the best manner of the past. Its interior is a true example of the Neo-Gothic style. Visitors can appreciate beautiful frescoes and stained glass windows, as well as decor elements made of bronze.

This guide to iconic landmarks and sights of San Francisco is protected by the copyright law. You can re-publish this content with mandatory attribution: direct and active hyperlink to www.orangesmile.com.
San Francisco - guide chapters 1 2 3 4 5 6 7 8

♥   Shopping area ' Fillmore Street' San Francisco, 2 km from the center. On the map

♥   Shopping area ' Florida Street' Buenos Aires, 2 km from the center. On the map

♥   Shopping area ' Haight Ashbury' San Francisco, 2.7 km from the center. On the map

♥   Shopping area 'Union Street' San Francisco, 3.3 km from the center. On the map

National and city parks around San Francisco
♥   City Park 'San Francisco' , 2.3 km from the center. On the map

♥   Art museum 'Exploratorium' San Francisco, 3.3 km from the center. On the map

Sights around San Francisco from our guide 'Extreme places on Earth' 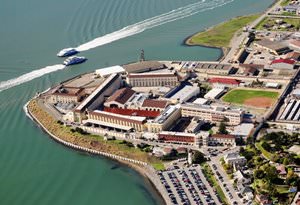 Distance from San Francisco center - 19.3 km.
The world learned about the historic prison in 1993 for the first time. The filming of "Bound by Honor" took place on its territory at this time. Metallica chose the prison for the filming of their new music video for the song St. Anger ten years later. The musicians gave a concert for the prisoners in the same year. Access to the prison is prohibited today. Therefore, curious tourists will have the opportunity to look at it only from afar. The cape of the same name is the location of the prison. Tourists can see its territory during boat trips. … Read further 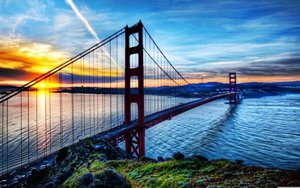 Distance from San Francisco center - 7.1 km.
Today, one of the most beautiful and grandiose bridges in the world is known as one of the most popular places for a suicide. More than 1 200 people have committed suicide throwing themselves off. Currently, police is taking all possible measures to patrol the bridge. In recent years, security officers annually take out of bridge about 70 people, who try to commit suicide. In addition to the hopeless individuals, the bridge attracts a huge number of travelers who want to enjoy this magnificent structure. You can ride a taxi or a rental car here or use dedicated lanes for cyclists and pedestrians. … Read further 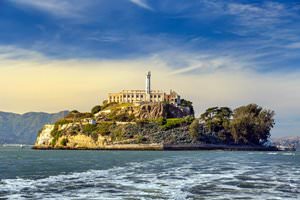 Distance from San Francisco center - 5.8 km.
There are also old barracks on the island. Prison employees and their families once lived in them. The situation on the island has not changed much since the prison was closed. Only a few buildings underwent minor reconstruction. An interesting part of the tour is listening to the magnetic film. The memories of the prison guards and some of its inmates are recorded on it. Wonderful views of the Downtown area can be enjoyed from some areas of the island. There is an opportunity to take a lot of great photos during the tour. … Read further

Search touristic sites on the map of San Francisco

Sightseeing in regions nearby San Francisco

San Jose
San Jose is a very important city for the US. Although for a long time this city has been behind its famous neighbor, San Francisco, nowadays the city stands at the forefront of innovative technologies, as well as of the development and introduction of new technology projects. Thanks to its location in the famous Silicon Valley, this city started developing rapidly in the ... Open »
Sacramento
The Capitol’s cupola deserves a separate mention. It is placed at a height of sixty-seven meters above the roof of the building. A golden ball-shaped lantern illuminates the cupola every day after sunset. Inside the California State Capitol, there are many service rooms that have become offices of the state’s administration and governor. There is also the Senate Chamber ... Open »
California
Going for a trip to California be sure to visit San Francisco. The city also represents a huge amount of entertainment and cultural venues. Don’t forget about San Diego and San Jose; they have a surprise for their guests too. For example, there is the famous Rosicrucian Egyptian Museum in San Jose; the most visited cultural center in San Diego is the Maritime Museum. Fans of ... Open »
Santa Barbara
Santa Barbara is famous for its architectural and cultural attractions. There is a museum with collections of art by local artists - Honnero, O'Keeffe and Sarjeta in the city. Tourists also enjoy visiting Museum of Natural History, which is considered the oldest museum of the city; Art Museum with its exhibitions of antiques, photographs, Asian and American art; Maritime ... Open »
Malibu
However, this is not the biggest attraction of Zuma Beach. Don’t forget to come here at sunset to see an incredibly picturesque view. If you visit this ocean coast closer to the evening, you can see how the sun goes beyond the horizon. It looks like the ocean is slowly swallowing our day star. This is not the only peculiarity. During the sunset time, the sky becomes painted ... Open »
Nevada
Nevada is the most arid and desolate state of the USA, however, its population is growing by leaps and bounds. Tourists are attracted to these places by incomparable Las Vegas. Just 20 years were taken for a huge city to rise in the heart of the Mojave Desert; now it is famous for its entertainment centers, casinos, luxury hotels and restaurants. The main part of its profit is ... Open »

All about San Francisco, USA - sightseeings, attractions, touristic spots, architecture, history, culture and cuisine. Prepare your trip together with OrangeSmile.com - find out the 'must see' things in San Francisco, which places to visit, which excursions to take, where the breathtaking views are waiting for you. Planning your trip with this travel guide will help your to get the most out of San Francisco in few days.