Sightseeing in Jacksonville - what to see. Complete travel guide 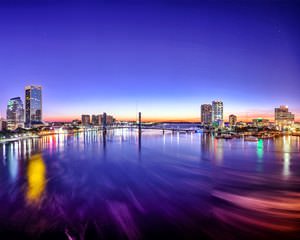 There are many large cities in Florida, and Jacksonville is one of them. In modern times, this is a rapidly developing urban center, and this fact has a beneficial impact on the prosperity of local people, and, naturally, on the size of Jacksonville’s population. Tourists also enjoy visiting this city because of the gorgeous old districts of Jacksonville that still have many historical buildings, an interesting location on the St. Johns River, beautiful waterfronts, and a large number of museums.
The territory of modern Jacksonville was one of the earliest settlements in the territory of the United States. The first settlement in the area, Ossachite, appeared approximately 6,000 years ago. At that time, the Timucua people lived there. Europeans appeared in this part of the American land only in the 60s of the 16th century. This is when French Huguenot explorer Jean Ribault landed on the bank of the St. Johns River. After that, the river appeared on the map. Two years after this event, the first European settlement on the river – Fort Caroline – was established. This territory became a part of the United States only in the first part of the 19th century. This is when the city got its current name. Jacksonville got its name after the seventh President of the United States of America.
During the Civil War period, in 1864, the biggest battle in Florida, the Battle of Olustee, took place near Jacksonville. Even though the city remained safe and didn’t get any damage, the war had a negative effect on the economy of the region. In 1867, Jacksonville turned into a winter resort that attracted celebrities and rich people. When the Second World War started, it was decided to make a naval base in the city. When the war ended, the nearby settlements merged with Jacksonville, making it the biggest city in the United States at that time. Copyright www.orangesmile.com
Beaches in Jacksonville are perfectly suitable for both groups of tourists and families with children. Despite the achievements of the local building industry, the city’s authorities banned development near the waterfront. This is the reason why local beaches maintain their original look. The Jacksonville Beach area is the most popular. It is also the biggest one. This part of the city is always crowded but it is quite calm at the same time. Because of this, it is always comfortable to relax here and forget about the urban stress. Tourists can even fish in the river and don’t worry that the surrounding noise and people might drive the fish out. 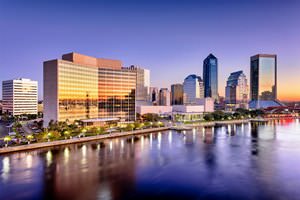 Tourists and vacationers from all over the world visit this place in order to not only sunbathe but also enjoy various activities such as cycling and beach volleyball. Are you fond of horseback riding? There are special sites where people can ride a horse not far from the beach area. Even complete beginners can ride a horse here together with a professional who teaches the basics of horseback riding. Fans of exploring the underwater world can always rent all gear nearby. Water is quite transparent in this region, so it is easy to see the bottom even without goggles.
Travelers and vacationers in Jacksonville usually enjoy visiting Friendship Fountain in Jacksonville that has got worldwide recognition. The fountain is installed on the south bank of the St. Johns River. The official opening of this marvelous fountain happened in 1965. At that time, this was the tallest and biggest fountain in the world. The fountain was reconstructed and remade a number of times over the years, but it still remains the calling card and the most famous attraction of the resort city. 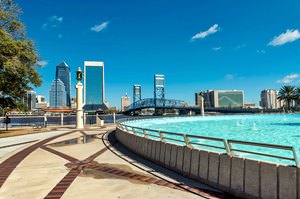 Besides beach recreation, tourists can visit local museums if they want to learn more about the culture and history of the region. There are many museums of different kinds in Jacksonville. For example, the Cummer Museum of Art and Gardens is a great venue that is worth visiting. In this museum, visitors can see unique and interesting artworks by talented artists not only from America but also famous European painters. Besides paintings, the museum exhibits a big collection of porcelain. Each item exhibited here is a masterpiece with its own story.
You are lucky if you visit Jacksonville during the Independence Day celebration. On July 4th, all local people celebrate this important holiday, and so this is a traditional time for festivities of all kinds. Various parades and festive processions with loud music have become an essential part of the holiday. In the evening, bright fireworks paint the sky in different colors. 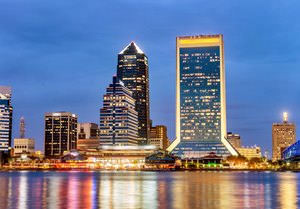 Jacksonville has an international airport that is situated twenty-three kilometers from the central part of the city. The airport serves flights from the majority of large US cities such as Boston, Chicago, Dallas, Huston, New York, Washington, and Philadelphia. Besides air connection, there are daily trains to Jacksonville from New York and Miami.
This guide to iconic landmarks and sights of Jacksonville is protected by the copyright law. You can re-publish this content with mandatory attribution: direct and active hyperlink to www.orangesmile.com.

City tours, excursions and tickets in Jacksonville and surroundings

National and city parks around Jacksonville
♥   City Park 'Tattersall' , 13 km from the center. On the map

Art galleries in Jacksonville and around
♥   Art museum 'Museum of Contemporary Art Jacksonville' Jacksonville, 0.4 km from the center. On the map

Sights around Jacksonville from our guide 'Extreme places on Earth' 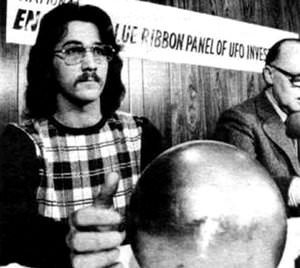 Distance from Jacksonville center - 0.5 km.
The unique possibilities of the sphere were not limited to this. During further 'house research' the family has found out that the ball has the boomerang properties. If you hit the sphere on the flat surface, it can roll on it for more than 10 minutes with small pauses, but will return to the starting point at the end. The strange sphere is 'weather-sensitive': if you put it in the shade, it will necessarily roll on the sun. At present, the location of the artifact, as well as its hosts, is unknown. It can not be excluded that they have left the house after the series of mysterious phenomena. The American UFO researchers claim that the poltergeist was rampant on the Betz farm in the late 1970s. … Read further

Search touristic sites on the map of Jacksonville

Sightseeing in regions nearby Jacksonville

Daytona Beach
At the beginning of the 20th century, when an automobile boom started in the world, the thirty-five-kilometer-long beach in Daytona Beach had no chance of staying unnoticed. Car and motorbike owners from all over the world visited this place to compete in racing. According to historical data, first car racing in Daytona Beach had two major participants – cars by Louis ... Open »
Golden Isles
Little Saint Simons Island is the smallest island of the group. This gorgeous strip of land has retained its untouched beauty. Only twenty-five people work on this island. Everyone else is tourists who come to see the gorgeous wild nature of the island. Only on Little Saint Simons Island, it is possible to see how cedar trees are in perfect harmony with beaches. The view is ... Open »
Orlando
Besides Disney you will find numerous places of interest in Orlando. You can visit Sea World Aquarium, which has opened recently. In this place you will see numerous aquariums and even an artificial reef; in addition to fish you can see the inhabitants of the Arctic, which live in a separate pavilion. Excursions to the botanical garden named Cypress Gardens are no less ... Open »
Kissimmee
The city was founded relatively recently, in 1883. The first hundred years of its development was stable, but not very intensive. In 1971, the legendary Walt Disney World Amusement Park opened in the immediate vicinity of Kissimmee. Since that time, the number of tourists annually visiting these places has significantly increased. More and more new hotels, large-scale ... Open »
Tampa
The third largest city in Florida, Tampa is located on the coast of Tampa Bay Gulf. Tampa was added to the territory of the United States in the middle of the 19th century. Even at that time this was a promising and a rapidly developing industrial area. In the end of the 19th century the city became very famous due to the tobacco company that had produced best cigars in the ... Open »
Florida
Sarasota offers a rich excursion program with dozens of museums and galleries. Perhaps the most unusual venue is the Ringling Circus Museum. A lot of interesting places for walking can be found in Tampa; the most striking sight is Busch Gardens. The best time for a trip to Florida is the period from October to June, as at that time rains are seldom and nothing will make ... Open »

All about Jacksonville, USA - sightseeings, attractions, touristic spots, architecture, history, culture and cuisine. Prepare your trip together with OrangeSmile.com - find out the 'must see' things in Jacksonville, which places to visit, which excursions to take, where the breathtaking views are waiting for you. Planning your trip with this travel guide will help your to get the most out of Jacksonville in few days.