Sightseeing in Cincinnati - what to see. Complete travel guide 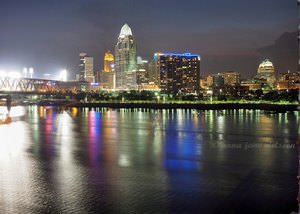 Cincinnati occupies a special place among oldest American cities. It belongs to the cities of the US which have started the history of the country. A pig is the symbol of the city and it really deserves this title. Pig has been chosen not only because of local pork that is very famous. It was pork fat that gave the start to the "beauty industry" of the country. Nowadays the headquarters of the world's largest cosmetics companies are located here.
The city stands on the Ohio River, which pure and clean water is the true pride of the townspeople. Moreover, the struggle for the purity of the river has become a matter of honor for every citizen of Cincinnati. The neighborhood of the city and the bank of the Ohio River are really great places to stroll and relax.
Among the sights of the city that are worth mentioning the U.S. Air Force Museum. Here you will be able to see transport and combat aircraft and missiles from virtually all parts of the world. Some argue that the collection of this museum is the largest in the world. You visit to the city’s zoo will be also very interesting. The booklets tell that you will need at least one week to explore this wonderful place. Of course, Kings Island Entertainment Center remains the main place of pilgrimage for tourists. Here you will find almost a complete collection of fascinating modern attractions. Finish your observation of the city by visiting the famous fountain. Copyright www.orangesmile.com
The most unusual historical symbol of the city is the suspension bridge named after Johann Röbling. It was constructed in 1866 and was the longest suspension bridge in the world by the time it had been finished. The length of the bridge is 322 meters. Exactly by its example, the famous Brooklyn Bridge was constructed. 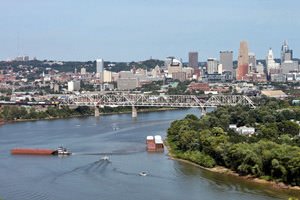 Guests resorts should certainly pay their attention to legendary skyscrapers, the most popular of which is the Carew Tower. The prototype of this skyscraper is the world-famous Empire State Building. In the 80s, the top of the skyscraper was decorated with the figure of the small gorilla. Today, on the 48th floor of the skyscraper, there is an excellent viewing platform that has a view of all the districts of the city and its neighborhood.
The Cincinnati Observatory plays a big role in the city cultural life. When it had been just opened, it was one of the first professional observatories in the country. Today, you can take excursions around the observatory on particular days. The visitors can also take part in different themed events, during which they can admire stars and attend educational lectures. 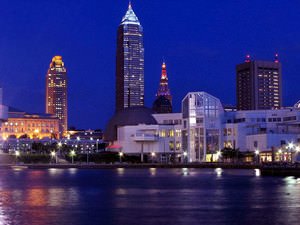 In Cincinnati, there are quite unusual attractions, including the unfinished underground. At one time, it was decided to build the underground in the city and huge investments were made in this project. However, it was not implemented and closed after building several underground tunnels. The unfinished underground has been preserved to this day. Today, its tunnels are the popular tourist attraction.
The city is also distinguished by its spectacular religious constructions. The most beautiful site from an architectural point of view is St. Peter’s Church. It has a fascinating design and resembles ancient Greece temples. The project author was famous American architect Henry Walter who projected this fascinating church in the neoclassical style. 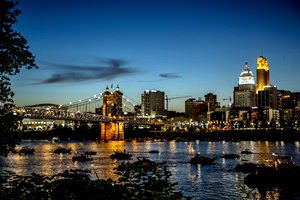 Another interesting example of the Moorish style is the Plum Street Temple that was built in 1866. For over 150 years, the interior and exterior of the temple have remained unchangeable. This temple houses a lot of unique religious values. There were several such churches but only this one has been preserved to this day.
This guide to iconic landmarks and sights of Cincinnati is protected by the copyright law. You can re-publish this content with mandatory attribution: direct and active hyperlink to www.orangesmile.com.

City tours, excursions and tickets in Cincinnati and surroundings

Shopping streets in Cincinnati
♥   Shopping area ' O Bryonville' Cincinnati, 5.6 km from the center. On the map

♥   Shopping area ' Hyde Park Square' Cincinnati, 7.6 km from the center. On the map

National and city parks around Cincinnati
♥   State Marine Park 'Ziegler Cove' , 1.4 km from the center. On the map

Art galleries in Cincinnati and around
♥   Art museum 'Contemporary Arts Center' Cincinnati, 0.5 km from the center. On the map

♥   Art museum 'Cincinnati Art Museum' Cincinnati, 2.1 km from the center. On the map

Sights around Cincinnati from our guide 'Extreme places on Earth' 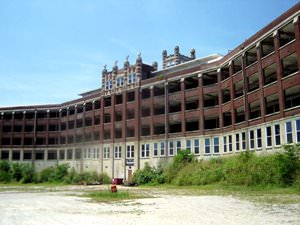 Distance from Cincinnati center - 157.8 km.
In 1961, the tragic history of the hospital received a new round; it was converted into a nursing home. Conditions were terrible and the results of inspections that were published in the 70s shocked the whole world. Since 1982, the resort is in ruins attracting numerous research groups only. Spontaneously moving objects, unexplained sounds and smells - these are just some of the supernatural phenomena that can be observed in the walls of Waverly Hills Sanatorium. … Read further 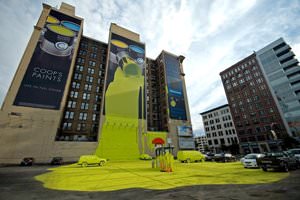 Distance from Cincinnati center - 162.2 km.
The banner shows the color of the car parked next door, which serves as a 'striking' reminder of the necessity of the insurance of the property. The banner looks incredibly beautiful and realistic and has the area of ​​about 400 square meters nationwide society is famous for the unusual advertising campaigns. For advertising purposes, she even used the scandal of Kevin Federlein and Britney Spears. The clever misrepresentation of advertising for the non-existent color has caused a stir in the advertising world and has attracted the attention of thousands of people from different countries. … Read further

Search touristic sites on the map of Cincinnati

Sightseeing in regions nearby Cincinnati

Indianapolis
Besides sport competitions many cultural events are organized in the city. Tourists can attend, for example, International Indianapolis Festival, Theatric Fringe Festival, Heartland Film Festival, Music Festival Midwest and Jazz Festival Indy Fest. The city is very attractive from the architectural point of view. Here you will find modern beautiful buildings, facilities from ... Open »
Columbus
There is an international airport not far from the city - John Glenn Columbus International Airport. It accommodates domestic flights as well as flights from many other countries. Having arrived at the airport, take a bus to get to the city downtown. It is also possible to get to Columbus by bus from other cities in the United States, such as Cincinnati, Indianapolis, and ... Open »
Hobart
To get to the Australian city of Hobart on the famous island of Tasmania, tourists need to use airline services. This is currently the only way to get to the capital of the state. It is possible to make a change in Melbourne and then fly to Hobart Airport. Of course, tourists can always fly to Sydney first. Upon arrival at Hobart airport, tourists can use a taxi or bus to get ... Open »
Cleveland
Cleveland is one of the largest megalopolises of the United States. The city was founded by a famous politician Moses Cleveland in 1796. He is famous for his participation in war for independence. The structure of the city is quite unusual. Cleveland is divided into several regions. Each region has its own characteristics and specific cultural direction. Public Square is ... Open »
Detroit
In the beginning of the 80s of previous century the country suffered from the oil crisis, and American factories started a competition with Japanese car manufacturers and their economic cars. This made a huge impact of many automobile companies including Detroit-based ones. Some companies simply went bankrupt and this was very hard for the city. Large number of luxurious ... Open »
Nashville
One more attraction, which Nashville is very proud of, is situated on the top of the highest hill in the central part of the city. This is the Tennessee State Capitol. The building features Greek neoclassic architecture. There is a small chapel on the top of the building. The four porticos on the sides of the building make the capitol look like an Ionian temple. The building ... Open »

All about Cincinnati, USA - sightseeings, attractions, touristic spots, architecture, history, culture and cuisine. Prepare your trip together with OrangeSmile.com - find out the 'must see' things in Cincinnati, which places to visit, which excursions to take, where the breathtaking views are waiting for you. Planning your trip with this travel guide will help your to get the most out of Cincinnati in few days.