Sightseeing in Nashville - what to see. Complete travel guide 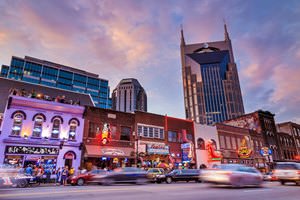 In the United States of America, in the country’s south-west to be precise, lies the city of Nashville that is the capital of the Tennessee State. Nowadays, this is a prosperous city that is widely recognized as the birthplace of country music. Thanks to the popularity of this music genre, millions of people around the world found out about Nashville. Do you enjoy listening to country music? One of the local museums is dedicated to it. This is the right venue to learn more about the history of this genre of popular music and see famous performers. The architectural heritage of this city invites tourists to make a journey to the past and see how this American state lived in the previous centuries. The majority of the buildings belong to the 19th century.
Such Native American tribes as Cherokee, Chickasaw, and Shawnee were the first settlers in the area of the modern Tennessee State. Hunting was the main occupation of these people. In 1779, the Virginia natives founded a settlement in the deserted area. They called the new town after General Francis Nash. The newly founded town developed quickly thanks to its beneficial geographic location. Seven years after the foundation, the town got its first codex. Another thirty years later, Nashville became the capital of Tennessee. Until the Civil War in the United States, Nashville was a prosperous city and a major river port.
After a series of battles in February 1862, the Union Army captured the city. They had to restore many buildings as a large part of the city was in ruins. As the state was occupied by the Union forces until the end of the war and there were no more battles in the area, Nashville recovered quickly. As the city kept developing, many new and beautiful buildings appeared here. Nowadays, these are good examples of classic architecture, many of which have survived until our days. In the 90s of the 20th century, Nashville entered the stage of the third economic boom. This significantly helped local authorities to “revitalize” the city center. Copyright www.orangesmile.com
Perhaps, the Country Music Hall of Fame and Museum is the most famous attraction in Nashville. This is the most visited establishment of this type in the United States. The main purpose of the Hall of Fame was to collect and save all precious artifacts that are in some way connected to American vernacular music and its history. During a visit to this museum, it is possible to see many unique exhibits such as private items of music stars. The numerous collections of the museum feature instruments that once belonged to legendary musicians, as well as their music notes and costumes, in which they played during performances. 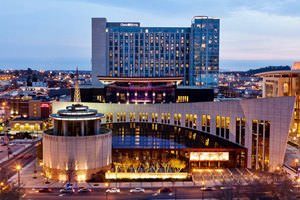 Tourists from all over the world who like country music come to this museum to see with their own eyes the famous Cadillac, which belonged to Elvis Presley. Besides this car, the museum exhibits two more vehicles. One of these vehicles is Pontiac Bonneville made in 1963. Another famous musician - Webb Pierce – was driving that car. The other car is featured in Smokey and the Bandit II film. The museum has a recording studio where everyone can demonstrate their vocal skills and sing with karaoke. There are also daily masterclasses that teach how to make catchy and attractive posters.
One more attraction, which Nashville is very proud of, is situated on the top of the highest hill in the central part of the city. This is the Tennessee State Capitol. The building features Greek neoclassic architecture. There is a small chapel on the top of the building. The four porticos on the sides of the building make the capitol look like an Ionian temple. The building of the city’s attraction started in 1845. To build the striking Capitol, builders brought limestone mined in a query not far from Nashville. Inside the Tennessee State Capitol, there is a museum that exhibits various historic artifacts. 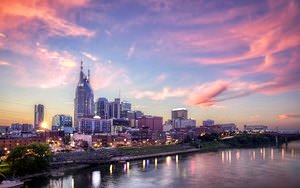 Are you interested in places to visit together with children? There is an interesting zoo in Nashville, a visit to which is like a journey to the African savannah, after which you move to South American rainforests, and see the indigenous Asian fauna. Some animal species are very rare. For example, the clouded leopard is an endangered feline, which fur is very valuable on the black market. The Baird’s tapir is almost extinct because the natural habitat of this animal – tropical forests – disappears due to the anthropogenic factors. There are also toucans, gorgeous Bengal tigers, and many other animals. All animal cages are big and mimic the natural habitat of every species.
Most European countries do not have direct flights to Nashville, so tourists usually need to make a connecting flight to New York, Washington, or Atlanta first. It is important to mention that the first variant is usually the most affordable. After that, take a domestic flight to the “birthplace of the country music”. At the Nashville airport, tourists can use public transport or get a taxi to the city center. Besides that, it is always possible to rent a car for the time of your vacation in this wonderful city.
This guide to iconic landmarks and sights of Nashville is protected by the copyright law. You can re-publish this content with mandatory attribution: direct and active hyperlink to www.orangesmile.com.

City tours, excursions and tickets in Nashville and surroundings

Shopping streets in Nashville
♥   Shopping area ' The Gulch' Nashville, 1.1 km from the center. On the map

♥   Shopping area ' Green Hills' Nashville, 7 km from the center. On the map

National and city parks around Nashville
♥   Recreation Area 'Bush’s Landing' , 47.4 km from the center. On the map

Art galleries in Nashville and around
♥   Art museum 'Cheekwood Botanical Garden and Museum of Art' Nashville, 11.9 km from the center. On the map

Sights around Nashville from our guide 'Extreme places on Earth' 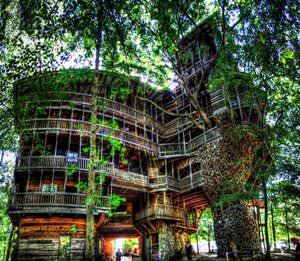 Distance from Nashville center - 159.5 km.
High glazed ceilings, beautiful wooden supports and the trunks of living trees rising in the middle of the rooms, designer furniture and interesting decorations in a country style - a huge house resembles a real forest palace. As natural supports for the house, seven century old oaks were used. A huge house was equipped with 80 rooms, and one of its main features is a small chapel. Since its opening in the 80s of the last century, the tree house is one of Crossville's main attractions, in 2012 started its first large-scale reconstruction, designed to provide the house with maximum fire safety. … Read further 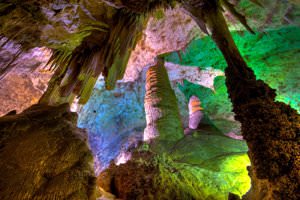 Distance from Nashville center - 128.9 km.
The subterranean vault, however, has a lot of other remarkable sights: the beautiful subterranean Styx river and the wonderful Lethe lake, as well as the Echo river, with a part of its river bed on the surfaces. The caves and lakes became the house for the unique inhabitants, which can not be seen in any other water basin on Earth. Only in the Mammoth Cave one can see the special shrimp species, the 'headless albino', as well as different kinds of blind fish and the crabs. A part of the halls and the passages is today equipped with the beautiful illumination. … Read further

Search touristic sites on the map of Nashville

Sightseeing in regions nearby Nashville

Memphis
Many audiophiles believe Memphis is home to the blues music as one of its streets, Beale Street, is mentioned in the song by the legendary W.C. Handy. Hotel Lorraine is, without a doubt, one of the most well-known places of the city. The reason for that is in the fact M.L. King was killed in one of its rooms. Today this room is turned into a museum dedicated to the most famous ... Open »
Atlanta
There are two museums in the historical part of the city. Both of them are surrounded by wonderful gardens. These are Syon house museum that is famous by its historical exhibitions and the house-museum of Margaret Mitchell will provide you with some very interesting facts about the history of Georgia. The Museum of Design is one of the most popular and best cultural facilities ... Open »
Cincinnati
Among the sights of the city that are worth mentioning the U.S. Air Force Museum. Here you will be able to see transport and combat aircraft and missiles from virtually all parts of the world. Some argue that the collection of this museum is the largest in the world. You visit to the city’s zoo will be also very interesting. The booklets tell that you will need at least one ... Open »
Indianapolis
The city has several botanic gardens and nature reserves, the most attractive of which is the park named “Butterfly Paradise”. Here you can see hundreds of types of different beautiful butterflies, pavilions with birds and picnic zones. Here you can see hundreds of types of different butterflies, pavilions with birds, and zones for picnic. Museum of Indiana State will get ... Open »
Columbus
There is an international airport not far from the city - John Glenn Columbus International Airport. It accommodates domestic flights as well as flights from many other countries. Having arrived at the airport, take a bus to get to the city downtown. It is also possible to get to Columbus by bus from other cities in the United States, such as Cincinnati, Indianapolis, and ... Open »
Hobart
To get to the Australian city of Hobart on the famous island of Tasmania, tourists need to use airline services. This is currently the only way to get to the capital of the state. It is possible to make a change in Melbourne and then fly to Hobart Airport. Of course, tourists can always fly to Sydney first. Upon arrival at Hobart airport, tourists can use a taxi or bus to get ... Open »

All about Nashville, USA - sightseeings, attractions, touristic spots, architecture, history, culture and cuisine. Prepare your trip together with OrangeSmile.com - find out the 'must see' things in Nashville, which places to visit, which excursions to take, where the breathtaking views are waiting for you. Planning your trip with this travel guide will help your to get the most out of Nashville in few days.