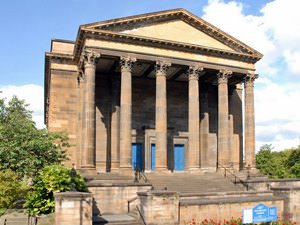 A rich choice of interesting symbols is one of main national peculiarities of Glasgow. Some of them have appeared just recently, while others have decorated costumes, flags and emblems for many centuries. Thistle flower is the most famous symbol of the city. The image of the flower can be seen on numerous souvenirs. This symbolic image graced the local coins even five hundred years ago. According to a legend, in ancient times the thistle helped to save the country from invaders. Enemy forces could not pass the field overgrown with prickly thistle unnoticed. The Scottish army was attracted by the cries of the enemy and defeated the invader.
Advices to travellers: what you should know while being in Glasgow
1. Summer months are considered the most favorable time for a trip to Glasgow. During this time of year nothing will spoil your excursion program. Travelers, who expect to devote much time …

Open
Solitaire flag is a no less known symbol of the city. As a rule, travelers enjoy buying it as a commemorative gift. The flag look like a white cross on a sky-blue canvas. For many centuries flag has remained the official symbol of the country.
Not many people know that there’s also an unofficial flag, which is sometimes called Ferocious Lion. Yellow canvas is decorated with the image of a red lion - the symbol was used by the monarchs as yet in the early medieval period, but it didn’t receive the official status. Despite the fact that this symbol cannot be used by all the other organizations and establishments, the fierce lion has become the main symbol of local football fans. You can see these bright red and yellow flags on all football matches. Copyright www.orangesmile.com
Extraordinary weekend in Glasgow - unusual places, services and attractions for travel gourmet
…

Open
Whiskey is a no less peculiar and well-known symbol of Glasgow. The national drink is also very popular among foreign tourists. Experienced collectors can spend days studying showcases of local shops and choosing excellent drinks for their cellars. There are even several museums dedicated to the national drink in the city. 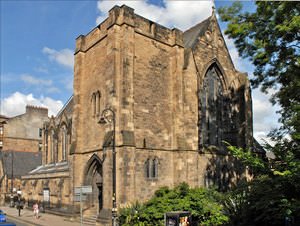 In Glasgow, as well as in other cities of Scotland, is very popular a special kind of fabric - tartan, which is used in tailoring kilts and other accessories. Guests of the city often buy elegant plaid scarves and coats as souvenirs. During various festivals and national celebrations men can even try to wear the traditional kilt. When choosing gifts, you can often see an image of the royal regalia - a sword, scepter and crown. These characters are much respected among the local residents. These days they praise them just like hundreds of years ago.
Glasgow design-hotels for stylish travellers
A noteworthy accommodation option from a design point of view is the Menzies Hotels Glasgow. This establishment has several prestigious awards to its name, including 4 stars from the …

Open
Festivals in Charles McIntosh's hometown always attract public attention, since each of them is interesting in its own way. Local organizers know how to hold parties, and each of the festivals serves as proof of this. The most famous event taking place in the city is Celtic Connections. This is a folk festival gathering the best performers in this genre. It starts in the middle of January and ends in early February, the venue is The Glasgow Royal Concert Hall. As the name implies, it is dedicated to Celtic music. Musicians from different parts of the world attend the festival as participants. Here you can listen to ethno jazz and traditional folk music. However, the event is not complete without dancing. As is known, Celtic music is very driving, so it is difficult to resist and not to break into a dance at the sound of bagpipes. 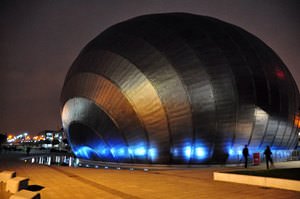 Another musical event attracting many visitors, fans of rock music, is called TRNSMT. The open-air event is held in Glasgow Green at the end of June. Among the festival's headliners are famous bands playing in various subgenres of rock music - from indie to alternative metal. Before TRNSMT you can get some jazz - this is the time when the Glasgow International Jazz Festival takes place in Merchant City where the main venue is George Square. Here you can listen to different styles of jazz music - soul, funk, blues.
Top places to stay in Glasgow - most luxurious hotels
In Glasgow, finding the right hotel to put up will not be difficult for wealthy travelers. There is, for example, the hotel One Devonshire Gardens a Hotel Du Vin in the prestigious West End …

Open
Another interesting event, the West End Festival, is scheduled for the same month. At this time there is a parade, and the event itself is often referred to as "Scottish Mardi Gras" - the central streets are festively decorated to make parades seem as picturesque as possible. Apart from processions, visitors can enjoy theatrical performances, live music, shows, a children's program, as well as a fair where you can buy some interesting gizmos. The event is joined by many restaurants and cafes in the city center. At this time, everybody feels a festive extravaganza, so memorable afterparties are guaranteed. By the way, the festival has repeatedly received awards. Thus, it is ranked 30th among top festivals according to The Independent magazine. 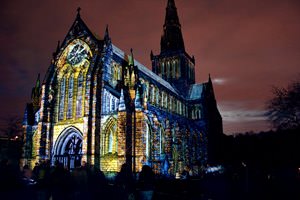 In mid-May, the Southside Fringe Festival starts - a large-scale cocktail of burlesque, music, cabaret, theater, and art. All this happens in local clubs, bars, and restaurants, so if you're traveling at this time, take care of the clothes in order to feel the full immersion into the atmosphere. One more great festival to visit is held in March. Everyone knows the love of Scots for good humor, and therefore it is not surprising that at this time you can witness such an event as the Glasgow International Comedy Festival. Without exaggeration, this is the largest comedy festival in all of Europe, and therefore it is visited by people from all over the world.
Old hotels keeping the history of Glasgow
The Grand Central Hotel is a true historical legend of Glasgow. The opening of this fashionable hotel took place in the year 1883. In the more than a hundred years of its existence, the …

Open
Some local festivals are dedicated to bagpipes. First and foremost, it's worth mentioning Piping Live! Festival (or Piping Hot Festival) that takes place at the beginning of August at four locations - George Square, The National Piping Center, St Aloysius Church, and Kelvin Hall. The opening of the festival takes place in Royal Concert Hall. The World Pipe Band Championships are held within the framework of the festival. Without exaggeration, this is the largest event of this kind in all of Europe, so here you can see (and, of course, listen to) participants from all over the world. This is confirmed by the fact that it has repeatedly been awarded the “Festival of the Year”. 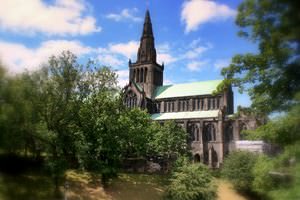 The Merchant City Festival, one more major event in the festival life of Peter Capaldi's hometown, is held in Merchant City, as the name implies. The festival falls on the beginning of August. The program involves dancing, theatrical and musical performances, fashion shows, stand-up comedy, food courts, and art exhibitions. This is a great chance to get acquainted with the local culture since its participants are mainly local talents. Many events can be visited for free. One more interesting event takes place at the end of February, and its name is Aye Write !. This is a literary festival offering meet-and-greets, readings, and seminars.

This guide to traditions and festivals in Glasgow is protected by the copyright law. You can re-publish this content with mandatory attribution: direct and active hyperlink to www.orangesmile.com.
Glasgow - guide chapters 1 2 3 4 5 6 7 8 9 10 11 12 13 14 15

Cathedrals and basilicas near Glasgow
♥   St. Andrew’s Metropolitan Cathedral, Glasgow, 1.2 km from the center. On the map

♥   National Shrine of Our Lady of Lourdes, Motherwell, 19.9 km from the center. On the map

♥   Cathedral Church of St Blaan and St Laurence, Dunblane, 40.3 km from the center. On the map

Survived castles around Glasgow
♥   Castle 'Skipness Castle' Strathclyde, 0.9 km from the center. On the map

♥   Castle 'Crookston Castle' Strathclyde, 7 km from the center. On the map

♥   Castle 'Bothwell Castle' Strathclyde, 11.9 km from the center. On the map

Colors of Glasgow in photos

Traditions and festivals in cities around Glasgow

Motherwell
The citizens also like fishing. This kind of hobby is family entertainment. Traditionally, the locals can go fishing at any time of the year. One of the most prestigious entertainments here is catching salmonids. Active tourists can order a fishing trip. It is also a good opportunity to admire natural beauties. The indigenous people’s love of nature is relevant not only ... Open »
Kilmarnock
Over the past 200 years, Johnnie Walker whiskey, which first began to be produced at local Diageo factory, became one of the main symbols of the city and the real pride of its residents. Now this whiskey is one of the most famous and prestigious in the world, its recipe was invented in Kilmarnock at the beginning of the 19th century. A few years ago, the government ... Open »
Edinburgh
Hogmanay – the local New Year – remains the favorite holiday of locals and tourists. The celebration starts on December 29. During four days various celebrations and public festivals take place on the streets of Edinburgh. Colorful fairs, theatrical performances and activities for children – you will see many people on the streets of the city until late at night. This ... Open »
Belfast
If you prefer contemporary art, perhaps you should visit the Audio Visual Arts Festival. The main theme of the event is the relationship between electronic music and the visual arts. Concerts of famous performers of the electronic scene are arranged as part of the festival. Sessions devoted to research on the possibilities of combining sound and visual images are also held at ... Open »
Inverness
However, music is not the only passion of the indigenous people. They are fond of extreme sports and competitions. Every year Inverness hosts city games known as «Highland Games», during which local strongmen demonstrate their talents. The organization of this festival is one of the oldest traditions. Every year the exercises that athletes perform become more original and ... Open »
Isle Of Man
A lot of interesting legends are associated with wildlife of the island; one of them has created a furor in the early 20th century. Farmers of Dorlish Cashen, which was around Dalby, said that they have seen a mongoose. The animal hasn’t differed from others besides of speaking pure Manx. It has willingly talked to owners of the farm and disturbed them much; the news about ... Open »

Cityguide on traditions, mentality and lifestyle of people in Glasgow. Learn the best periods to visit Glasgow to discover its soul - authentic festivals, events and celebrations. We will also reveal the interesting habits, attitude towards the world and to tourists in Glasgow.