Sightseeing in Norwich - what to see. Complete travel guide 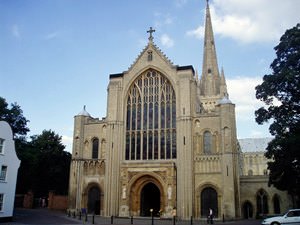 This town is located near London. Norwich began to develop yet in the Middle Ages. Here are opened several of largest and important industrial plants and factories dedicated to producing shoes. Norwich is also not deprived by cultural places of interest, and so the local residents take care of the memory of past centuries, which is embodied in numerous architectural buildings and monuments. Here you will find medieval temples, ancient streets, as well as pubs and taverns, many of which work for more than a hundred of years.
Advices to travellers: what you should know while being in Norwich
1. Credit cards are accepted in all eating houses, hotels, stores and malls and other establishments to pay for services and goods. Mastercard, VISA and American Express are the optimum …

Open
Besides this, Norwich is a famous educational center as here are opened such famous educational facilities as the University of East Anglia that teaches students from different countries. The rest in this town will be loved by tourists who enjoy peace and quiet as there are no noisy discos and nightclubs here. Instead of them Norwich is full of beautiful parks in which you will see absolutely tamed squirrels.
Among the ancient architectural places of interest we should definitely mention the Castle, which is located in the downtown area. Its building took place in the beginning of the 12th century. The main religious attraction of Norwich is Holy Trinity Cathedral built in the 11th century. This beautiful building is a true masterpiece and a wonderful example of the Romanesque architecture. In the 15th century one more vault was added to the complex, but it was already built in the Gothic style. You can also attend the remains of the fortification wall, which surrounded the town in the 14th century. Copyright www.orangesmile.com
Shopping in Norwich - main shopping streets, outlets and boutiques
The most popular shopping spot in Norwich is Royal Arcade that occupies a chic 19th-century Victorian-style building. Over the years, it has preserved many original elements of architecture. …

Open
Besides the building of the University we should mention other modern the library that was opened in 1963. The building resembles a magnificent palace, the chief architect and planner of the library was D. Percival. Move to one of the pubs to have some rest after walking and sightseeing. Many of them are wonderfully decorated in the antique style, while others are really ancient facilities that accept visitors for over than a hundred of years. 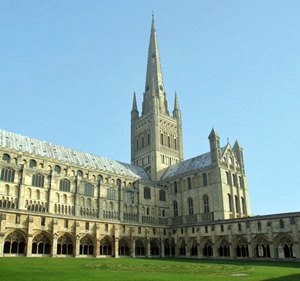 In 2000, the Forum opened in Norwich - a beautiful modern building with a glass front facade. It has many interesting exhibition galleries that are used for holding various events, as well as a large library and even a BBC office within its walls. The Forum regularly holds excursions, during which tourists can visit offices of famous companies, as well as hidden corners of the large-scale center, which are inaccessible to ordinary visitors.
Family holidays with kids in Norwich. How to entertain your child, things to show to children.
Tourists love to visit Norwich because it has everything they need for a wonderful holiday - historical attractions (Norwich Cathedral, the University of East Anglia, the Guild Hall), …

Open
The Royal Gallery is extremely popular among fans of shopping. In this shopping center, you can find a locally known Colman's Mustard Shop operating a museum of the same name. The shopping mall itself is an important historical monument occupying a luxurious Victorian-style building. The opening of the mustard shop took place in Norwich back in 1814. Visitors to the museum have a chance to see a lot of interesting exhibits dedicated to the development of the Colman's brand. 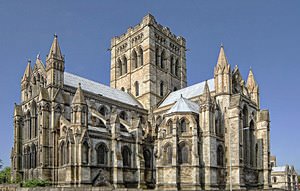 Another "trade attraction" of the city is the Dragon Hall on Royal Street. This unique shopping pavilion was built in 1427. More than 500 years ago, merchants from all over the world presented their best goods here. The trading pavilion owes its unusual name to a dragon-shaped ornament adorning one of its walls.
Cuisine of Norwich for gourmet with top restaurants and cafe
One of the most interesting gastronomy destinations in Norwich is The Tea House Café. Every day the cafe is visited by hundreds of guests desiring to try hot pastry and aroma tea. The café …

Open
There are many interesting religious monuments in Norwich, although some of them cannot be found in popular tourist guidebooks. An excellent example is the stone church of St. Peter Hungate. It was built in the 15th century and has not changed much over the centuries. Like many years ago, today the main distinctive features of the church are its massive square tower and windows adorned with skillful stone carvings. 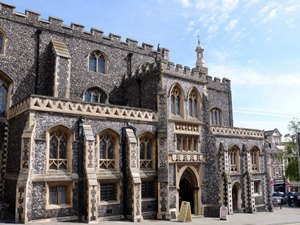 While walking along the historic Elm Hill Street passing near the church you can also admire the ancient buildings. At the end of this street is a small triangular square, in the center of which you can see a big plane tree. The age of this tree is several hundred years.
Authentic traditions, festivals and lifestyle of Norwich inhabitants
Norwich is one of the most amazing cities in England. The history of the city has more than 2,000 years. Today, travelers know it for its unique medieval attractions. Norwich is also …

Open
A striking Gothic-style monument is the Church of St. John Maddermarket, its construction was completed in the 16th century. This religious structure features a luxurious facade decoration, while its interior is quite modest. The church has preserved an old baldachin and original woodwork elements.

This guide to iconic landmarks and sights of Norwich is protected by the copyright law. You can re-publish this content with mandatory attribution: direct and active hyperlink to www.orangesmile.com.
Norwich - guide chapters 1 2 3 4 5 6 7 8

City tours, excursions and tickets in Norwich and surroundings

Survived castles around Norwich
♥   Castle 'Norwich Castle Norwich' , 0.1 km from the center. On the map

Sights around Norwich from our guide 'Extreme places on Earth' 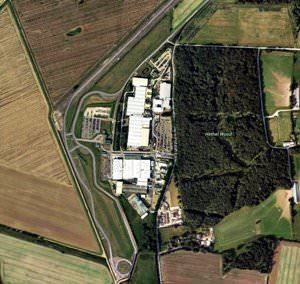 Distance from Norwich center - 10.9 km.
In the 1950s, the Lotus Cars company was interested in the military constructions. In only a few years, the former military base was converted into a car factory, and the runways became an ideal place for testing high-speed cars. Today the military base is not as big as the original object used to be. A part of the starting field was returned to the local inhabitants and is now used as a farmland. … Read further

Search touristic sites on the map of Norwich

Sightseeing in regions nearby Norwich

Ipswich
Tourists, who come to rest in this town, will be interested in visiting ancient buildings, the most notable of which are Town Hall, Wills House, Sparrow Mansion, St. Bartholomew church, Christchurch Park and the mansion on its territory. While taking a walk in Ipswich, you can see several brewing houses, craftsman outlets and grain warehouses. Many of these facilities have ... Open »
Cambridge
The local Botanic Garden is the best place for peaceful and silent rest. Here you can see the widest choice of plants, many of which were brought to England from exotic countries. Magnificent stone gardens, hothouses, lakes and water gardens simply stun by their fascinating look. You should also consider visiting the most multifunctional facility of the town – Wolfson ... Open »
Lincoln
At a certain time in the history of Lincoln, this city was minting coins. When Wilhelm the Conqueror came to England to fight and make this territory his own, Lincoln was one of the first cities that attracted his attention. The city’s location on a hill was one of the reasons for this. It was simple and convenient to control the surrounding territory from Lincoln, and so ... Open »
Luton
During this period of the year life in Luton noticeably fastens and even “burns” in anticipation of this wonderful holiday. The streets and squares of the city are turned into the place of conducting fairs and festivities. During these days shopping malls and trading centers of the city are full of various holiday gifts and souvenirs and, what’s more important, ... Open »
Canterbury
This was an important period for the whole region because Romans developed the town’s infrastructure. They built baths, a temple, theater, and a forum that is an open space building in the central part of Canterbury. Rich and noble people settled in stone houses while the poor built wooden buildings. In order to protect the city from attacks of barbaric tribes, it was ... Open »
London
Buckingham Palace. Changing of the Guard in front of Buckingham Palace is a popular performance that attracts numerous tourists. The crowd watches how the royal infantry marches from St James's Square to the residence of the British monarchs. King George III inherited the palace in 1762 as a private residence. Every year the building was expanded. When Queen Victoria ... Open »

All about Norwich, Great Britain - sightseeings, attractions, touristic spots, architecture, history, culture and cuisine. Prepare your trip together with OrangeSmile.com - find out the 'must see' things in Norwich, which places to visit, which excursions to take, where the breathtaking views are waiting for you. Planning your trip with this travel guide will help your to get the most out of Norwich in few days.