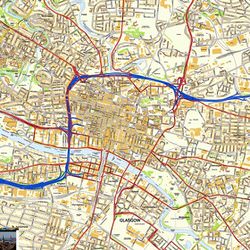 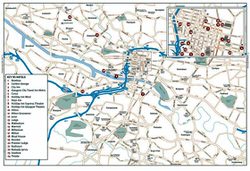 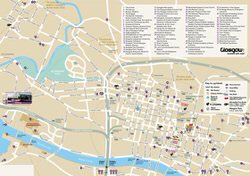 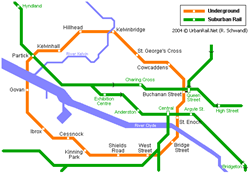 Interactive maps of hiking and biking routes around Glasgow

1. You can zoom in/out using your mouse wheel, as well as move the map of Glasgow with your mouse.
2. This interactive map presents two modes: 'Biking Routes' and 'Hiking Routes'. Use the '+' button on the map to switch between them.

This Glasgow map has two modes: 'Railway Network' and 'Landscape & Rural Map'. Use the '+' button on the map to navigate.

Our guide to Glasgow

The most busy shopping area in Glasgow is Golden Z. It unites several streets, which are a series of trendy boutiques and specialty shops. In this area, there are many jewelry shops that wealthy tourists will especially like, and there are also shops with Celtic jewelry, where you can buy great ornaments for only 6 - 8 euros. Here you'll find specialized shops offering Scotch whiskey, chocolate from local factories … Open

Hotels with history of Glasgow

The opening of the family-run Smiths Hotel took place in the year 1928. From the day of its opening, this hotel has been attracting guests with its laid-back and comfortable atmosphere. Located in the scenic West End district, this hotel is set in a spectacular Victorian townhouse and proposes to its guests, rooms decorated in a very simple and relaxing style. Cute vintage wallpapers of light shades cover the … Open

4. In order to rent a car you will need a driving license of the international standard, a passport and a credit card with the required amount of collateral in the account. The amount of collateral depends on the brand of a car rented. You can reduce your daily fee by renting a car for a longer period of time. 5. Motorists and pedestrians should not forget that any violation of traffic rules with … Open

Festivals and events in Glasgow

Festivals in Charles McIntosh's hometown always attract public attention, since each of them is interesting in its own way. Local organizers know how to hold parties, and each of the festivals serves as proof of this. The most famous event taking place in the city is Celtic Connections. This is a folk festival gathering the best performers in this genre. It starts in the middle of January and ends in early February, … Open

Glasgow is an ideal destination for weddings and honeymoons. The Hilton Garden Inn Glasgow City Center remains one of the most popular choices among couples. This hotel is located on the banks of the River Clyde and has a stunning interior design. The hotel has wonderful double rooms with a full-height panoramic window to offer couples. There are also excellent conditions in the hotel should you want to organize an … Open