Sightseeing in Dundee - what to see. Complete travel guide 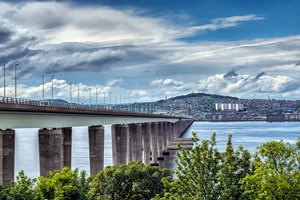 Dundee is the fourth-most-populous city in Scotland. The settlement lies on the north bank of the Firth of Tay. When visiting this city, tourists might hear another name of Dundee – the Discovery City. The city got this name because Captain Scott started his adventure to the Antarctic in Dundee. The ship that the captain used for his expedition was named Discovery. The gorgeous Scottish city usually pleases its guests with ever warm and sunny weather. Besides that, the city can be proud of its rich heritage in literature because many writers and journalists were born in Dundee.
During the prehistoric period, there was a volcano on the site of the hill that Dundee is now built on. With time, the volcano became extinct and never woke up again. First mentions of the city date back to the 12th century. This was the start of Dundee’s history. The English and Scotts were constantly battling each other for the right to own this land. In the Middle Ages, local people were mostly involved in fishing. Actually, whale hunting was the main source of income for them. In the 19th century, the process of treating jute with whale fat was finally discovered, and this is when first textile factories appeared in Dundee. A bit later, the city’s manufactures started producing cotton and wool.
The 19th century also marked the start of a new period in the development of the city. The shipbuilding industry appeared in Dundee. Unfortunately, shipbuilding didn’t become a mainstream industry in the region. It has ceased to exist by now. In 1879, a tragic event happened in Dundee. Residents of the city still remember about it and tell stories about that day. On a stormy day, the bridge that was connecting Dundee with the other bank of the firth became damaged and fell down into the water because of the harsh weather conditions. The train was moving on the bridge at that moment, and so it fell down too. On this sad day for the city, seventy-five people died at once. Copyright www.orangesmile.com
Do you want to visit a real Scottish ship? In this case, visit Unicorn, a surviving sailing frigate built in the 20s of the 19th century in order to strengthen Britain’s fleet. Soon after the time that the Unicorn was built, timber sailing ships became outdated and were replaced with newer and more durable iron ships and then with steamers. The size of the Unicorn was really impressive for its time – it was 150 feet or 45.7 meters long. As the frigate was built for a military purpose, it had forty-six cannons and had enough space for two hundred and fifty sailors. 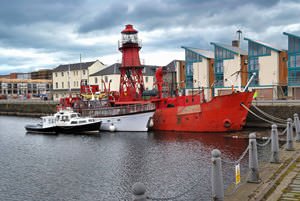 In 1960, the Unicorn found its last resort in the Victoria dock in Dundee. After a thorough restoration, the watercraft was given to the city’s historical society that now takes care of the ship and maintains it in good condition. The unicorn is free to enter, but everyone is welcome a donation in any currency.
The city’s suburbs, as well as the nearby villages, hide many charming places with a rich history. Glamis Castle, which is located in the village of Glamis not far from Dundee, is one of these gorgeous attractions. Nowadays, a museum is open in a part of the castle. The venue welcomes thousands of guests every day. The Earl and Countess of Strathmore and Kinghorne live in the other part of the building. 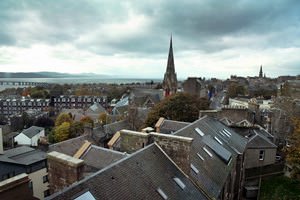 The beautiful castle was built in the 14th century. Unfortunately, it hasn’t retained its original look through centuries. The castle was expanded and modernized several times, and so new elements appeared in the complex during these renovations. The castle’s design that we can see now dates back to the 17th century. Just like many Scottish castles, Glamis Castle has its own ghosts and, of course, there are many legends about this prominent building. The incredibly beautiful garden surrounds the castle. The area looks so charming that it can warm hearts even of tourists who don’t like sightseeing.
Are you fond of science? In this case, you simply ought to visit the Mills Observatory. This is a public observatory that is always glad to welcome new guests. The building has a distinctive cupola, the height of which is seven meters. An interesting fact – the cupola is made from paper-mache. Inside the building, you will find a Victorian period telescope. Visitors can use this telescope and look to the sky through it. The observatory is open in Balgay Park not far from the city center. 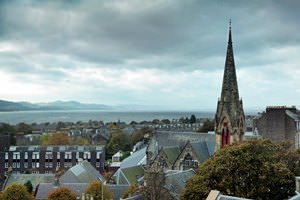 Dundee has an airport that regularly accommodates flights from the capital of the UK. There is also a large airport in Edinburgh that also has flights to Dundee. Of course, it is possible to reach Dundee from the cities mentioned above by bus. If you travel in a car, use routes A90 or M90 to get to this Scottish city.
This guide to iconic landmarks and sights of Dundee is protected by the copyright law. You can re-publish this content with mandatory attribution: direct and active hyperlink to www.orangesmile.com.

City tours, excursions and tickets in Dundee and surroundings

Survived castles around Dundee
♥   Castle 'Dudhope Castle' , 0.9 km from the center. On the map

Sights around Dundee from our guide 'Extreme places on Earth' 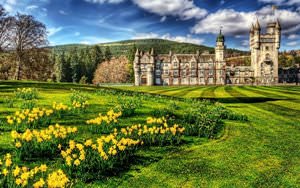 Distance from Dundee center - 66.2 km.
In the halls you can see a lot of paintings and wonderful sculptures. The marble floor is also made in the best traditions of royal decoration. The furniture in the castle is the same from the time of Queen Victoria. Near the castle has saved an old park that adores people with its outstanding design. In the summer the garden redolent of flowers. There has placed a wonderful greenery where you can see a lot of plants from the whole world. Also, it has a quite large kitchen garden, which in the 19th century was used for gardening vegetables for the royal family. The castle is surrounded with beautiful forests and other wonderful nature sightseeing. … Read further 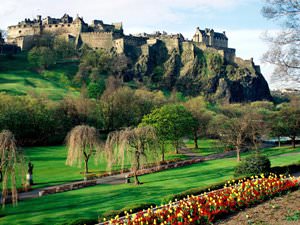 Distance from Dundee center - 58.8 km.
The excursions through the castle are incredibly exciting. On its territory is the beautiful St. Margaret Chapel - one of the oldest buildings in Scotland. In addition, one of the most precious relics of the country, the stone of Scone, is preserved in the castle. This is a huge sandstone block whose weight is more than 150 kg. This stone was used for centuries to perform the solemn coronations of the English and Scottish monarchs. Many experienced tourists are striving to get to the castle test at 1 pm. Since the year 1861 the Wachekanone shoots around 13-00 every day. This ritual is missing only two days a year - on Good Friday and Christmas. … Read further

Search touristic sites on the map of Dundee

Sightseeing in regions nearby Dundee

Edinburgh
The Palace of Holyroodhouse. The Palace of Holyroodhouse, which used to be the place of gossips, murders and political intrigues, is nowadays the official residence of the Queen. It's situated right in the centre of the medieval Royal Mile, the central street, which leads to the Edinburgh Palace. It was the place, where Maria Stuart spent the worst days of her life. Her ... Open »
Aberdeen
Take a walk in Aberdeen and you will meet many magnificent monuments and statues on your way. The majority of them will be made of granite and are concentrated near the shores of River Dee. One of the most famous sights of Aberdeen is The Episcopal Church of St. Andrew, which was built in 1817. Originally the church was created in traditional classic gothic style, but the ... Open »
Motherwell
You can also have a good time in the Rainforest Adventure. This center attracts visitors not only with modern equipment, but also with affordable prices. In the center, there are a lot of safe attractions for toddlers, including colorful rides, swings, and inflatable attractions. The entertainment center is distinguished by a friendly atmosphere. It is the best place for ... Open »
Glasgow
Nowadays Glasgow is a city of contrasts because this place combines the remains of the past industrialization and modern stylistic richness. This city was the second most important city of the British Empire with London occupying the first place. It is also considered one of the most impressive and unforgettable cities full of sights referred to Victorian period. That time was ... Open »
Kilmarnock
Well, if spending a few hours on neatly trimmed lawns is not part of your plans, feel free to go to Country Park having centuries of history. Amidst its ancient giant trees lies the territory of Dean Castle built in the middle of the 15th century by the Boyd family. Today, Country Park's forested area is recognized as a nature reserve. Its caretakers made every effort to ... Open »
Inverness
The city also keeps one more sight, as on its territory is located the highest point of the UK - Ben Nevis Mountain. From the top of the mountain you can see amazing views of lake, bay and pediment regions covered with forests. You may also like attending an excursion to St. Andrew Cathedral. The project of this wonderful gothic building was developed by an architect Alexander ... Open »

All about Dundee, Great Britain - sightseeings, attractions, touristic spots, architecture, history, culture and cuisine. Prepare your trip together with OrangeSmile.com - find out the 'must see' things in Dundee, which places to visit, which excursions to take, where the breathtaking views are waiting for you. Planning your trip with this travel guide will help your to get the most out of Dundee in few days.