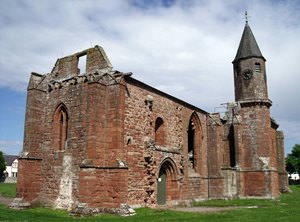 The city’s name has appeared from the River Ness, but a small industrial town has gained worldwide fame not because of this natural attraction. The legend about a mythical creature that lives in the nearby lake of Loch Ness is now known to almost everyone. Every year hundreds of thousands of travelers come to the town to make an excursion to the mysterious lake. People can spend hours staring to the surface of the lake hoping to see the mysterious inhabitant at least for a second.
Extraordinary weekend in Inverness - unusual places, services and attractions for travel gourmet
…

Open
Drumnadrochit village is located not far from the city. Here visitors are welcome to attend a wonderful museum dedicated to the Loch Ness monster. The mythical creature is certainly the most mysterious, but not the only symbol of the city. Inverness is often called the birthplace of porridge, bagpipes and whiskey. During year the city hosts a lot of interesting music festivals dedicated to the national musical instrument.
Blair Athol whiskey remains one of the most popular souvenirs that travelers purchase in local stores. It is produced in one of factories of the city. This whiskey is very popular among connoisseurs of the drink. Inverness Music Festival has remained the most important event in the cultural life of the city for many years. The festival starts in early March and lasts for 10 days. This is a grandiose musical celebration that traditionally attracts public of all ages and musical preferences. Copyright www.orangesmile.com
Shopping in Inverness - main shopping streets, outlets and boutiques
In Inverness there are a lot of unusual and specialized shops. In a fabulous historical building is arranged the most famous souvenir shop in the city - Highland House of Fraser. It is very …

Open
The celebration is a wonderful way to hear a wide range of various music styles. Various interesting concerts, competitions and exhibitions take place here every day during the festival. Musicians from different countries compete in choral singing, opera singing, as well as solo singing and performing original songs. Musicians perform classical and contemporary compositions. Concerts devoted to the national music are particularly popular there. 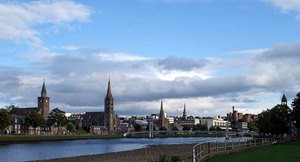 However, music is not the only passion of the indigenous people. They are fond of extreme sports and competitions. Every year Inverness hosts city games known as «Highland Games», during which local strongmen demonstrate their talents. The organization of this festival is one of the oldest traditions. Every year the exercises that athletes perform become more original and inimitable. A team of professionals traditionally participates in the celebration of athletes. Together with this competition is organized another one, which is open for participation for anyone. Quite often performances of newcomers are just as exciting and unique as of professionals.
Guide to Inverness sightseeing - things to see and to visit
This is a port city located on the bank of the Ness River. Due to advantageous strategic location Inverness has always been the reason for wars and ambushes. Great kings and pirates fought …

Open
Inverness regularly hosts interesting cultural events. Tourists will find it interesting to attend Whisky & Gin Festival that starts in the middle of April and lasts five days. This is the time for master-classes, sampling sessions, music, and a never-ending atmosphere of fun. Emerald Casino & Resort is the traditional venue that has hosted the festival for years. Loch Ness Knit Fest, which takes place in the middle of October, attracts hundreds of knitting fans. Even visitors not interested in this handicraft will not be bored at the event because they can see true masterpieces made of yarn, participate in master-classes, listen to performances of local music bands, and even attend educational excursions in the city that cover many interesting landmarks. 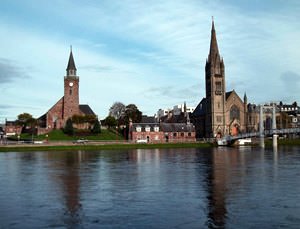 At the beginning of the first summer month, Northern Meeting Park becomes the venue of a music festival called OutDores. Its friendly, family-like atmosphere has made the event really popular. For tourists, it is an incredibly exciting way to get acquainted with the local culture by listening to performances of local musicians and trying authentic local food. It is hard to think of a better city than the heart of Scotland as the location of European Pipe Band Championships. This popular event, which takes place at the end of June, brings together hundreds of famous bagpipers who show off their skills and get rewarded for that.
Cuisine of Inverness for gourmet with top restaurants and cafe
Inverness is home to several hundred catering venues, so choosing the best one among them is definitely not easy. However, there are several restaurants in the city that are very popular …

Open
Inverness Highland Games is one of the most notable events in the cultural life of Inverness. For years, the popular games have excited locals and guests of the city who gather in Bught Park for that occasion. Inverness Highland Games start in the middle of July. The park traditionally hosts parades (needless to say, these processions are impossible without bagpipe bands). Numerous visitors have fun, dance, listen to music, and enjoy delicious local food. The games include several competitions, such as long jumping, marathon, axe throwing, and more. Winners are praised with long ovations of the festival’s visitors. 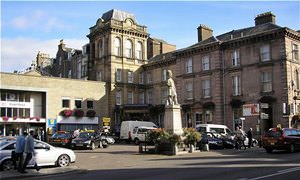 One of the most popular holidays in Scotland – Halloween – is widely celebrated in numerous clubs. As a rule, local establishments organize thematic parties to celebrate Halloween. The Christmas and New Year preparations start at the end of November. This is the time when Exclusively Highlands Christmas Craft Fair opens in Eden Court. The trade fair’s visitors can purchase interesting items created by local craftsmen. Besides that, this is the time for Inverness Christmas Lights Switch On Festival that only adds to the cheerful atmosphere in the city. Theatrical performances dedicated to the upcoming holidays usually start in the middle of December. As a rule, they take place in Whin Park. Christmas is a family holiday in Scotland, so locals prefer to celebrate it at home with their loved ones. Traditional Christmas delicacies include Cranachan, Christmas puddings, and sweet baked apples.

This guide to traditions and festivals in Inverness is protected by the copyright law. You can re-publish this content with mandatory attribution: direct and active hyperlink to www.orangesmile.com.
Inverness - guide chapters 1 2 3 4 5 6 7 8

Cathedrals and basilicas near Inverness
♥   Dornoch Cathedral, Dornoch, 46.4 km from the center. On the map

Survived castles around Inverness
♥   Castle 'Castle Stuart' , 8.9 km from the center. On the map

♥   Castle 'Cawdor Castle' Highlands and Islands, 18.4 km from the center. On the map

♥   Castle 'Urquhart Castle' Highlands and Islands, 21.5 km from the center. On the map 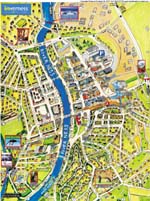 Colors of Inverness in photos

Traditions and festivals in cities around Inverness

Aberdeen
Local people are very calm and polite. They are distinguished by modesty and respect for family. Oddly enough, but when dealing with local residents it’s recommended to talk less. Too "talkative" companion can be simply considered rude. The natives are distinguished by punctual and scrupulous approach to any matter, so any sign of negligence causes a feeling of contempt. ... Open »
Glasgow
Not many people know that there’s also an unofficial flag, which is sometimes called Ferocious Lion. Yellow canvas is decorated with the image of a red lion - the symbol was used by the monarchs as yet in the early medieval period, but it didn’t receive the official status. Despite the fact that this symbol cannot be used by all the other organizations and establishments, ... Open »
Edinburgh
Residents of Edinburgh are quite friendly and sociable, even though they may seem to be a bit closed at first glance. Finding an explanation to this fact is not really complicated - the fact is according to the local etiquette rules people should stay calm during the acquaintance or at the first meeting. Locals usually greet each other with the phrase «How do you do?» and a ... Open »
Motherwell
In a warm period, tourists can visit many farms and take themed tours to value all the charms of country life. They can learn to take care of domestic animals, watch the production process of high-quality products, walk in the picturesque woods, and search for delicious berries. In the surroundings of Motherwell, there are several big apiaries. Honey is sold at all city ... Open »
Kilmarnock
Traditional wedding clothing is quite unusual as well. If the bride goes to the altar in a regular white dress, the groom is dressed in a real historic costume on the wedding day. The upper part is a classic white shirt and a jacket, and the bottom is a traditional kilt. The groom's mandatory decoration is a bag made of natural deer fur. In today's modern city, such ... Open »
Newcastle
Locals are known for their friendly and welcoming nature. Despite the fact that most tourists discovered Newcastle relatively recently, foreign guests have always been treated kindly here. Local people are always ready to show the way to any point of interest. Many first-time visitors to the city note that people here love and know how to have fun. In summer, they hold street ... Open »

Cityguide on traditions, mentality and lifestyle of people in Inverness. Learn the best periods to visit Inverness to discover its soul - authentic festivals, events and celebrations. We will also reveal the interesting habits, attitude towards the world and to tourists in Inverness.