Sightseeing in Canterbury - what to see. Complete travel guide 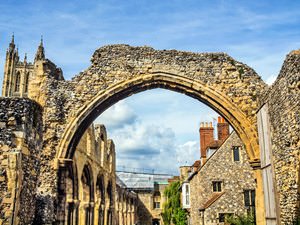 Canterbury is a British city in the county of Kent. The population of this city is only forty-five thousand people. The city is built on the River Stour that divides into two arms in the south-eastern part of Canterbury. One of these creeks flows along the fortress wall that now lies in ruins, and the other creek is like an arrow that pierces the city. Canterbury is conventionally divided into several parts, and this fact differs it from other cities in England. The central part of the city is the best place to learn more about the history of the region. North and West Canterbury are famous for their pubs and nightclubs, and the southern and eastern parts of the city are the location of shops and restaurants.
The territory of modern Canterbury was inhabited yet during the prehistoric times. Archaeological excavations prove this fact. Scientists discovered tools that are typical for the Palaeolithic age, Stone Age items, and various artifacts that date back to the Bronze Age. First mentions of this region date back to the period when the Celtic tribe of Cantiaci established a settlement here. At the start of our age, Romans conquered this region and decided to build a new town here. They named it Durovernum Cantiacorum.
This was an important period for the whole region because Romans developed the town’s infrastructure. They built baths, a temple, theater, and a forum that is an open space building in the central part of Canterbury. Rich and noble people settled in stone houses while the poor built wooden buildings. In order to protect the city from attacks of barbaric tribes, it was decided to build a thick wall around the town. However, when the Roman occupation ended in the 5th century, the city lost its importance and became desolated. That being said, this period didn’t last long. The Anglo-Saxons settled the territory in less than a century and renamed the town as Cantwareburh. Copyright www.orangesmile.com
What landmarks should tourists see in Canterbury? The Canterbury Cathedral is one of the oldest and most famous Christian structures in England. Local people often call it the Metropolitical Church. The cathedral was restored a number of times since 597. Despite this, it has managed to retain its centuries-old charm. While visiting this cathedral, you will notice that it doesn’t have one style because elements of different architectural styles were used in the design of this building. This is a truly glorious ensemble that consists of multiple halls and rooms. There are several other supportive buildings near the cathedral. 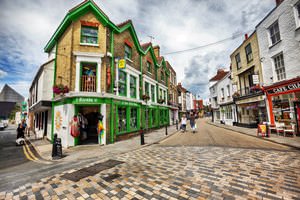 The eastern part of the church is the oldest. This is a wonderful example of Roman style. The nave in the center was built in the 14th century. The Trinity Chapel in the cathedral is the location of Thomas Becket’s remains. This is also the seat of the country’s archbishop. When exploring the building, pay your attention to beautiful stained-glass windows with scenes from the Bible and everyday life in the past. The gothic towers were added to the cathedral in the 19th century. They made the look complete and added even more charm to the gorgeous church. The taking a stroll on the adjacent territory, pay your attention to the plants cultivated in the monastery garden. It is possible to see some rare species here.
The Church of St Martin is the oldest church in Great Britain. It was erected in the 6th century by the order of Queen Bertha of Kent. At that time, it was a private chapel of the queen. There was a Roman temple on this site before the church. However, when Romans left the region, the queen ordered to transform the temple to her own chapel. The design of the church has many architectural elements that are typical for antique architecture. 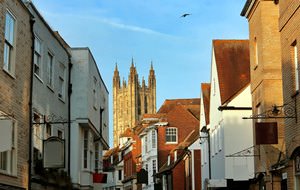 Later, the church got a new tower in the gothic style. The church is still active in modern times, so everyone is welcome to enter it to visit a divine service or to pray. Local people prefer to get married in the Church of St Martin. This is also the major church for funerals.
Canterbury doesn’t fall asleep after sunset. That being said, tourists need to keep in mind that the majority of entertainment establishments are located in the northern and western parts of the city. There are three nightclubs where visitors can listen to pop and rhythm and blues music. There is a university in another part of the city. Visitors can attend interesting concerts here. Besides that, there is a theater that regularly hosts various events, and local actors prepare interesting performances and plays. 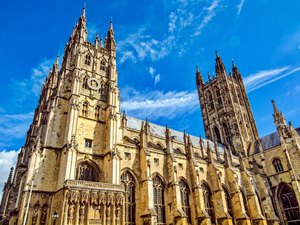 The easiest way to reach Canterbury is from London. You can get to the capital of the United Kingdom from virtually any county in the world. Most capitals have direct flights to London. Having arrived in London, head to Victoria or Charing Cross stations as there are high-speed trains that depart from them. In just one hour, you will reach the beautiful capital of Kent County.
This guide to iconic landmarks and sights of Canterbury is protected by the copyright law. You can re-publish this content with mandatory attribution: direct and active hyperlink to www.orangesmile.com.

City tours, excursions and tickets in Canterbury and surroundings

Survived castles around Canterbury
♥   Castle 'Canterbury Castle Canterbury' , 0.6 km from the center. On the map

National and city parks around Canterbury
♥   Park 'Queen Elizabeth II' , 81.1 km from the center. On the map

Sights around Canterbury from our guide 'Extreme places on Earth' 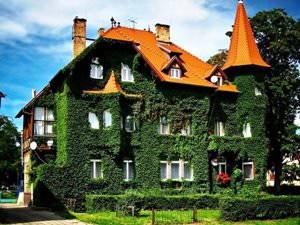 Distance from Canterbury center - 67.9 km.
The article pointed out that in recent years the house was in disrepair and needed care. It was also told that ivy, which has fully braided facade of the building, wasn’t cut for more than 20 years. Even more, the house is so merged with the surrounding nature, that a tree started to sprout through the kitchen floor. Today, the spectacular old building looks much more attractive than before sale. The new owner expects to resell it for a sum of several times the amount of the purchase. Hederated homes and bridges are not very rare for the UK, but only the Ivy House located in Chelmsford has gained the worldwide fame. … Read further 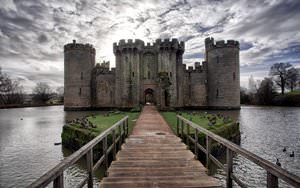 Distance from Canterbury center - 48.5 km.
Originally, the castle was built as a strategic object necessary for the protection of the surroundings of Red City. The French troops were a great danger to the settlement. However, in the fifteenth century the castle was forced to attack the troops of Richards III. Cut off. Bodiam is one of the most unusual castles in Britain. The castle is located very far from the waterfront and is located in the middle of the moat. Only a few castles from the 14th century had such a brittle construction project. It is clear that such a situation has significantly increased the strategic security of the castle. … Read further

Search touristic sites on the map of Canterbury

Sightseeing in regions nearby Canterbury

Calais
The structure of Calais is quite unusual as canals divide this city into two parts – old and new Calais. The old region is named Calais-Nor. It was severely damaged during war and historical monuments and places of interest were rebuilt almost from ruins. The new region of the city is named Calais-Sud; this is the location of main commercial streets of the city, so tourists ... Open »
London
The capital of the UK is visited by millions of tourists a year. There is nothing strange in that as London is home to an incredible number of attractions, wonderful old houses, fantastic museums, large and beautiful parks and, of course, the unique British charm. London is a very old city. In 43 AD Romans established a settlement on the River Thames. Over the centuries the ... Open »
Ipswich
This is a port town located in the eastern part of the country on the shore of the Orwell River. Ipswich, which is situated on the crossing of important trading routes, has been playing a crucial role since ancient times. The town acted as a binding link between the UK and other European countries. In previous centuries Ipswich was famous as a large industrial and trading ... Open »
Cambridge
Cambridge is a large linguistic center of England. It attracts tourists by elegant architecture style and wide choice of tourist routes. The number of sights here is so big that it’s hard even to number them all, while visiting all museums and galleries of Cambridge is nearly impossible. The local Botanic Garden is the best place for peaceful and silent rest. Here you can ... Open »
Luton
Luton is a relatively small town in England, which is located not far away from the capital of the UK, London. This fact makes Luton attractive to tourists. The population of the town estimates approximately 230 thousand of people. Luton is a particularly popular vacation for winter rest, especially for Christmas. During this period of the year life in Luton noticeably ... Open »
Oostende
It’s a major port city and a famous resort. The city’s name can be translated as “Eastern Region” as originally it was located in the eastern part of Testerep Island. Later sea level lowered and the island merged with mainland, but its name kept the memory of its foundation. During the warm season the resort attracts visitors by its spacious beaches; the swimming ... Open »

All about Canterbury, Great Britain - sightseeings, attractions, touristic spots, architecture, history, culture and cuisine. Prepare your trip together with OrangeSmile.com - find out the 'must see' things in Canterbury, which places to visit, which excursions to take, where the breathtaking views are waiting for you. Planning your trip with this travel guide will help your to get the most out of Canterbury in few days.