Sightseeing in Durham - what to see. Complete travel guide 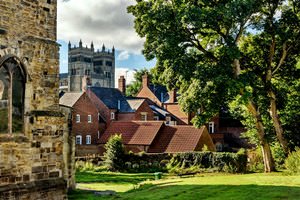 On the rocky bank of the picturesque River Wear, tourists will find the historic city of Durham, which is an administrative center in North East England. Tourists from all over the world visit this settlement in order to see the magnificent British region with their own eyes. In the past, this region started developing because it was suitable for building protective facilities and repulse enemies’ attacks. Nowadays, the rich architectural heritage of the city has made Durham a true “gem of North East England” and an attractive destination for numerous tourists.
The history of the city started at the time when ferocious Vikings plundered the monastery on the Holy Island of Lindisfarne. Because of that, the monks had to search for a new place to hide the relics of Saint Cuthbert who was their patron. When the monks were roaming in England, one of them saw an omen. The monk was told that they would find new shelter in the place where the River Wear bent. This is exactly where the monks settled in 995.
The new settlement started growing in size at the beginning of the 11th century. A new church appeared in the region, and then a fortress was built here. Soon, the settlement became so flourishing that the bishop chose Durham his residence. The city’s territory increased significantly after that. At the beginning of the 90s of the 11th century, the building of a cathedral was the primary aim in Durham. The plan was to keep the relics of the saint in this cathedral. The cathedral had to be built as soon as possible but this had to be a light and airy building with Romanesque architectural elements. Copyright www.orangesmile.com
The Durham Cathedral was finished in the 11th century. Besides the aesthetic feature, the cathedral played an important role in the protection of the settlement. The relics of Saint Cuthbert of Lindisfarne were put to the cathedral only once the building was finished and consecrated. Besides Saint Cuthbert, the cathedral became the last resort for Oswald of Northumbria. Nowadays, these two relics are the most sacred treasures of Durham. The construction of the cathedral didn’t stop at that time. 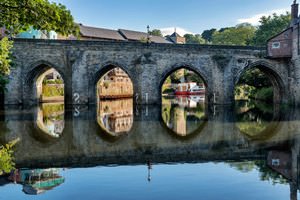 In the 12th century, the cathedral got a new addition – the gothic chapel of Blessed Mary the Virgin. Later, Bede the Venerable was buried in this chapel, as well as the main local cardinal, Thomas Langley. Do you want to take a look at old printed books? In Durham, tourists can see one of the largest collections of old books in England. This is a wonderful chance to see how books looked like centuries ago. Don’t forget to climb to the central tower, the height of which is sixty-six meters. The observation deck on the top of the tower offers an enchanting panoramic view of Durham and surroundings.
The castle, which appeared during the Wilhelm the Conqueror period, is another key landmark in Durham. Soon after the castle had been completed, the bishop made it his residence. In the late 30s of the 19th century, a university opened in this building. This is the third university in England that has been open since the past centuries. 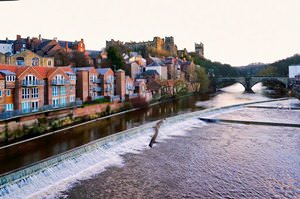 Durham University is internationally famous and acclaimed for its scientific research. The majority of graduates from this university find prestigious jobs because the establishment is known for its extensive training and teaching highly skilled specialists. Nowadays, there is a museum dedicated to the art of the Far East and archaeology that is open in the university’s territory. The museum exhibits interesting artifacts with worldwide recognition. There are no analogs of this collection in any other museum in the world.
As Durham is situated on the bank of the River Wear, there are many bridges in this city. Many of these bridges have become popular attractions that are great for admiring the beauty of local nature. Moreover, the city hosts regattas from time to time. These interesting competitions often end with various festive activities, and the whole city enjoys participating in them. Local regattas traditionally attract crowds of cheering fans, as well as numerous residents and guests of the city. Foreign tourists, who are fond of the orchestra music, will find it interesting to attend orchestra music festivals with performances of both professional and amateur musicians. The annual event lasts two weeks in Durham, during which it is possible to visit many interesting shows. 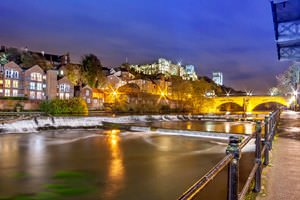 Travelers can reach Durham from the nearby city of New Castle. It is located approximately half an hour away from the British “northern gem”. If you travel by car, choose route A1. If you prefer to travel by train, it is possible to reach Durham from London, Birmingham, Edinburgh, and York. There are roughly sixty trains that move between these cities and Durham every day. Fourteen trains out of these sixty depart from the UK’s capital.
This guide to iconic landmarks and sights of Durham is protected by the copyright law. You can re-publish this content with mandatory attribution: direct and active hyperlink to www.orangesmile.com.

City tours, excursions and tickets in Durham and surroundings

Shopping streets in Durham
♥   Shopping area ' Silver Street' Durham, 0.5 km from the center. On the map

Survived castles around Durham
♥   Castle 'Durham Castle Durham' , 0.6 km from the center. On the map

National and city parks around Durham
♥   Regional Park 'Stones Country' , 46.9 km from the center. On the map

Sights around Durham from our guide 'Extreme places on Earth' 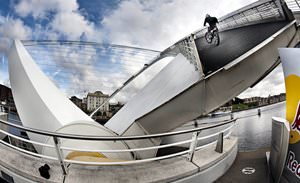 Distance from Durham center - 21.6 km.
At night the bridge is illuminated with the incredibly impressive artillumination, so the unique architectural object is also worth seeing after dark. Recently, the unique Gateshead Bridge has been popular with motorcycle riders using the lower bridge deck as a training ground. Several times a year, the interesting motor shows take place in the city, on which the Pforis show the incredible tricks and ride on the upmarket Brückedeck. … Read further

Search touristic sites on the map of Durham

Sightseeing in regions nearby Durham

Sunderland
Hilton Castle is an undoubted attraction of the town. The castle was the official residence of the Hiltons until 1746. Later the building was turned into a parish school. Built in 1066, the castle was initially made of wood. In the beginning of XV century it was completely reconstructed in stone. In the XIX century the castle’s design acquired the traits of the Gothic ... Open »
Newcastle
Newcastle is popular among tourists. This is very cheerful and noisy city. The rest in this city will be definitely loved by those, who love energetic parties - there are plenty of discos, bars and nightclubs in Newcastle. Quite often musical performances are held directly on squares. Naturally, the majority of visitors are young people. The Bigg Market is the best destination ... Open »
Middlesbrough
Middlesbrough is a modern city in Great Britain, which is famous as a university center. The life in this modern city is nothing similar to the life in Middlesbrough even a few decades ago. The beginning of the century was the period of rapid growth of Middlesbrough, turning it into a major industrial center of the country. However, even nowadays you still can see old buildings ... Open »
York
Cathedral is the main symbol of this city. Its building started yet in the 13th century and lasted for over than 400 years. It was built instead of a small Christian village. As the building has taken so long, the church represents a mix of absolutely different architectural influences. The oldest region of York is the location of remains of fort wall and city gates. Here you ... Open »
Leeds
Because of these changes much renovation work has been done in Leeds. It helped to restore historical buildings of the city. Much space has been devoted to greenery. In Leeds have appeared parks, gardens and boulevards. This has really changed the look of the city. At the same time new educational facilities have been opened here – schools, colleges, and two universities. ... Open »
Blackpool
Probably, the most popular event in Blackpool is the festival of light. Each year it attracts many people from surrounding regions and tourists. One of the most notable sights in the city is Blackpool Tower. This is a great historical sight. Even though it has built over 2 centuries ago, the tower is in great condition and is traditionally liked by travellers. The Promenade ... Open »

All about Durham, Great Britain - sightseeings, attractions, touristic spots, architecture, history, culture and cuisine. Prepare your trip together with OrangeSmile.com - find out the 'must see' things in Durham, which places to visit, which excursions to take, where the breathtaking views are waiting for you. Planning your trip with this travel guide will help your to get the most out of Durham in few days.