Colors of Isle Of Man - traditions, festivals, mentality and lifestyle 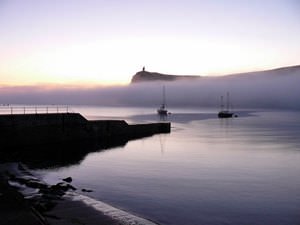 The picturesque island is famous for its centuries-old traditions, interesting culture and fascinating legends. At every step, travelers will encounter amazing national features; latest have found their expression in almost all spheres of life of the indigenous population. The symbol of the island is triskelion. It is the depiction of the three running legs emerging from a single point. If you look into one of the many pastry shops and bakeries, you can see a lot of chocolates and cookies copying this national symbol; they remain popular souvenirs among tourists.
Excursion over cultural sights of Isle Of Man - 'must visit' points of interest
In addition to its charming nature, the Isle of Man is characterized by an abundance of interesting attractions, which are must see to foreigners. It would be interesting to start your …

Open
Many travelers associate this picturesque island with cars, as vehicles for the world famous Top Gear magazine are regularly tested here. It’s also worth noting that the cottage of Jeremy Clarkson, the TV-presenter of the magazine, is situated on the island. Annually Isle of Man hosts cycling and racing; important sports events are held in spring and summer. Most travelers arrive to Isle of Mann at this time.
Tourists are attracted by beautiful nature, which also has its own typical features. During a walk through one of the most picturesque cities vacationers may notice unusual tailless cats. Those aren’t victims of local gang, as it may seem at first glance, but typical representatives of the local fauna. A special breed of tailless cats was developed a few years ago. Copyright www.orangesmile.com
Your active city break in Isle Of Man. Attractions, recreation and entertainment - best places to spend your day and night here
Unique nature of the Isle of Man is its main feature attracting fans of eco-tourism from all over the world. Strolls through scenic forests are one of the most popular activities among …

Open
A lot of interesting legends are associated with wildlife of the island; one of them has created a furor in the early 20th century. Farmers of Dorlish Cashen, which was around Dalby, said that they have seen a mongoose. The animal hasn’t differed from others besides of speaking pure Manx. It has willingly talked to owners of the farm and disturbed them much; the news about the mysterious little animal scattered around the world instantly. 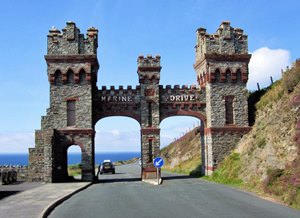 In the mid20th century, Isle of Man was literally attacked by investigators of paranormal events, but none of them had a chance to talk to the mysterious creature. Mentioning the Manx language, it is worth noting that it was filed as a history. Local children continue to study it in schools, but in everyday life natives communicate exclusively in English.

This guide to traditions and festivals in Isle Of Man is protected by the copyright law. You can re-publish this content with mandatory attribution: direct and active hyperlink to www.orangesmile.com.
Isle Of Man - guide chapters 1 2 3 4 5 6

Cathedrals and basilicas near Isle Of Man
♥   Former Cathedral of St. German, Peel, 8.6 km from the center. On the map

Survived castles around Isle Of Man
♥   Castle 'Sorbie Tower' Dumfries and Galloway, 62.5 km from the center. On the map

♥   Castle 'Carsluith Castle' Dumfries and Galloway, 70.4 km from the center. On the map

♥   Castle 'Cardoness Castle' Dumfries and Galloway, 71.6 km from the center. On the map

♥   Castle 'MacLellan’s Castle' Dumfries and Galloway, 74.2 km from the center. On the map

♥   Castle 'Dunskey Castle' Dumfries and Galloway, 75.2 km from the center. On the map

UK, with all its cultural versatility, has a lot of authentic traditions. The most striking of these is the traditional tea party. A table for tea has to stand near the fireplace, which is the coziest place of the house. It is covered with a snow-white or blue tablecloth. Utensils from one set are used; different cups and saucers are considered bad form. There must be a tea set on the table. It includes a teapot, a jug of boiling water, a milkman, dessert plates, forks and knives, a strainer stand, a sugar bowl with tongs and a wool cover that is put on a jug with boiling water. Toast, butter, eggs, sweet and unsweetened pastries, jams, and cookies are served too. … Open 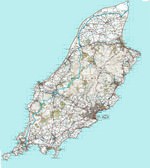 Colors of Isle Of Man in photos

Search for popular touristic sites on Isle Of Man map

Traditions and festivals in cities around Isle Of Man

Belfast
You should also visit the Festival of Fools. It is celebrated from May 2 to May 6 here. The streets of Belfast are filled with comedians, mimes, clowns, actors and acrobats at this time. Comedians perform in bars and restaurants. Costumed parades and processions regularly pass through the streets. For example, you may encounter a crowd of actors dressed as gorillas. They will ... Open »
Blackpool
According to a tradition, starting from 1934 a famous musician or an actor has been invited to the celebration in order to hold an opening ceremony. Thus, starting from early morning the city hosts various concerts and performances, and in the evening everyone gathers in order to see the ceremony «Switch On». A special guest switches a toggle, and the city erupts with ... Open »
Liverpool
When in the restaurant, it's customary to leave a tip for the service provided. The amount of remuneration should be 10% of the total amount of the order. In addition, give the tips for the waiters, maids and taxi drivers. If you are coming here with American dollars, euros, yens or any other currency but not pounds - better exchange the currency at home because the amount of ... Open »
Dublin
There is even a national color in Dublin - green. During various holidays and festivals the streets of the city are full of cheerful companies of locals dressed in green T-shirts and wearing hats of unusual shapes. Celebratory items of bright green color are sold in numerous stalls, so guests of the city always have an opportunity to purchase a nice costume and go to a holiday ... Open »
Kilmarnock
Traditional wedding clothing is quite unusual as well. If the bride goes to the altar in a regular white dress, the groom is dressed in a real historic costume on the wedding day. The upper part is a classic white shirt and a jacket, and the bottom is a traditional kilt. The groom's mandatory decoration is a bag made of natural deer fur. In today's modern city, such ... Open »
Bolton
Foodies will find it extremely interesting to attend Bolton Food and Drink Festival. It is the biggest annual event in Bolton. Last year, it attracted as many as 263,000 visitors to the town. The National Association of British Market Authorities even awarded this festival with the Best Food Market title. It’s a true feast of fun, entertainment, and delicious food. Bolton ... Open »

Cityguide on traditions, mentality and lifestyle of people in Isle Of Man. Learn the best periods to visit Isle Of Man to discover its soul - authentic festivals, events and celebrations. We will also reveal the interesting habits, attitude towards the world and to tourists in Isle Of Man.