Sightseeing in Leeds - what to see. Complete travel guide 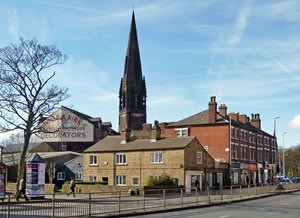 Leeds is a city located in the valley of the Aire River. This is one of the largest cities of England. London is located not far away from Leeds, so such an advantageous location makes it very popular. Leeds is also on approximately same distance from east and west coast of the country.
Shopping in Leeds - main shopping streets, outlets and boutiques
Leeds offers a wide choice of shopping centers and markets, as well as small specialized stores selling interesting goods. A beautiful modern building with a glazed roof houses Trinity Leeds …

Open
Yet in XIX century this provincial town was one of the main industrial centers of England. It occupied a small territory, but one could see there large choice of different factories. However, nowadays the share of industrial companies in Leeds is not that big. There are less and less factories here and more office buildings. Leeds has slowly become a business center of the north of England.
Because of these changes much renovation work has been done in Leeds. It helped to restore historical buildings of the city. Much space has been devoted to greenery. In Leeds have appeared parks, gardens and boulevards. This has really changed the look of the city. At the same time new educational facilities have been opened here – schools, colleges, and two universities. This has made Leeds one of the largest educational centers of the UK as well. Copyright www.orangesmile.com
Family holidays with kids in Leeds. How to entertain your child, things to show to children.
The selection of gaming and entertainment centers in Leeds is simply amazing. Among them, suitable centers can be selected for children of all age. Those who prefer family trips to the …

Open
Among main sights of the city are Royal Arsenal with large exhibition of different collections (items devoted to knights times and knights tournaments, war time, hunting) and City’s Picture Gallery with a large collection of pictures of XX century. Modern Leeds attracts people by its history, its constant flexibility and ability to fit modern life. Today this is a city full of noise and numerous students, sleepless bars, restaurants, and clubs. This is also a place rich in tremendous Edwardian architecture. 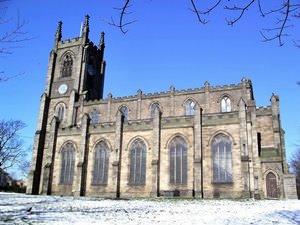 Among the permanent symbols of Leeds is the beautiful Cathedral, which since its foundation was the seat of the local bishop. The very first church in its place was built in 1838. A few years after the construction was completed, it began to expand. The reformation of the church was finally completed by 1901. Now, it is a spectacular monument in the Neo-Gothic style.
Cuisine of Leeds for gourmet with top restaurants and cafe
Leeds is one of the five biggest cities of Great Britain. It attract tourist not only with unique landmarks, but also with excellent restaurants. Stylish All Bar One restaurant offers its …

Open
An equally impressive architectural site is the Church of St. Peter. In its place, the very first church was built in the 7th century, and later it was completely destroyed during a major fire. Subsequently, the religious monument was destroyed twice more by fire. The last church managed to be fully preserved not only its appearance, but also its interior decoration. Inside, visitors can see an ancient organ, very beautiful stained-glass windows and mosaics. 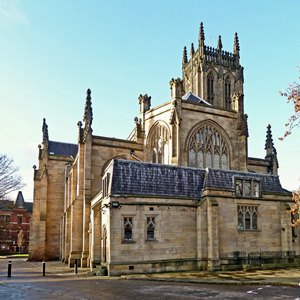 In the north-western part of Leeds you can see the ruins of the Kirkstall Abbey, which was built in 1152. The monastery ceased to exist during the reign of Henry VIII. Not so long ago, the dilapidated historical building was restored and opened for visits. Some parts of the monastery have survived quite well. During an excursion, visitors will be told about how monks spent their life hundreds of years ago.
Authentic traditions, festivals and lifestyle of Leeds inhabitants
Leeds is one of the oldest British cities where people keep honoring their historical traditions. Locals are proud of their nationality, their way of life is strikingly different from that …

Open
On one of the central streets of the city you can see a very unusual historical building with a rounded facade. This is the Leeds Corn Exchange, which was built in 1864 and was one of three similar exchanges in the country. This historic building is perfectly preserved, it was recently completely restored. Today, it houses one of the most popular shopping centers in the city. 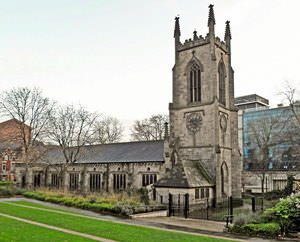 The most luxurious and recognizable historical facility of Leeds is the Town Hall building. Its tower, whose height is 68.6 meters, is visible from many city streets. Queen Victoria herself took part in the opening of the grand building. In the construction such huge sums were invested, which caused discontent of many residents of the city. During the Second World War, the Town Hall was badly damaged by the bombing. However, it was restored in the shortest possible time. Now the historical building has been converted into a cultural center. It often hosts concerts, exhibitions and other mass events. One of the largest and most beautiful squares in the city is in front of the building.

This guide to iconic landmarks and sights of Leeds is protected by the copyright law. You can re-publish this content with mandatory attribution: direct and active hyperlink to www.orangesmile.com.
Leeds - guide chapters 1 2 3 4 5 6 7 8

Shopping streets in Leeds
♥   Shopping area ' Trinity' Leeds, 0.3 km from the center. On the map

Survived castles around Leeds
♥   Castle 'Sandal Castle' , 15.8 km from the center. On the map

National and city parks around Leeds
♥   Regional Park 'Stones Country' , 73 km from the center. On the map

Art galleries in Leeds and around
♥   Art museum 'Leeds Art Gallery' Leeds, 0.4 km from the center. On the map

♥   Art museum 'Royal Armouries Museum' Leeds, 1.1 km from the center. On the map

♥   Art museum 'Hepworth Gallery' Wakefield, 14 km from the center. On the map

♥   Art museum 'Yorkshire Sculpture Park' Wakefield, 20.6 km from the center. On the map

Sights around Leeds from our guide 'Extreme places on Earth' 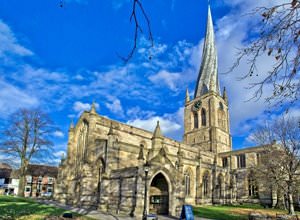 Distance from Leeds center - 62.8 km.
Locals have many incredible legends associated with the ancient religious building. According to one of them, the Devil running away from a local blacksmith damaged the church's spire. The old Church of St. Mary and All Saints is notable not only for its original appearance but also for its interior decoration. Many ancient elements have been preserved in it. The old cemetery is also located on the territory of the church. You can see the tombs of many famous residents of the city there. … Read further

Distance from Leeds center - 55.3 km.
The main part of the excursion is connected with a picturesque park, which is decorated with artificial lakes, fountains and old sculptures. During warmer months, the vacationists have a great opportunity to go by boat trips. In summer, on the territory of the park, you can find a cosy café. The arboretum has a number of rare plants. Originally it was built for academic researchers. Travellers, who plan to go there in winter, will see a lot of interesting things. On Christmas Eve you can see near the palace fairs and various entertainment events and charitable actions. … Read further

Search touristic sites on the map of Leeds

Sightseeing in regions nearby Leeds

York
Clifford’s Fortress is one of the most notable buildings of York. The towers of this fort feature stunning panoramic views of the city. Several halls of the fort are devoted to keeping collections of historic artifacts. In this fort often take place various excursions and lectures devoted to the history and development of York. Among the exhibits are collections of Ancient ... Open »
Sheffield
Each street of the city keeps the memory of most important events in its history. Here you will find the ruins of the castle built in the XIII century. This place was a prison of Mary Queen of Scots in 1571-1583. The castle, which has belonged to the Duke of Norfolk, is also a truly interesting place. The local Museum of Antiquities is a source of great pride for residents of ... Open »
Manchester
In addition to well-developed industry this city is the center of British history and culture. In Manchester, not London, have first appeared repertory theaters. Today the visitors of this wonderful city can enjoy attending numerous theaters: City Drama Theatre, Opera House, Palace Theatre, Apollo Theatre and others. The most interesting museums of Manchester are Salford ... Open »
Bolton
When the parliament was yet about to be created, Rupert Pfalcskiy tried to seize the city. At that time took place one of the scariest facts in the history of the city – the Bolton Massacre, during which were killed over 1600 people. During the time of the World War II Bolton was turned into a large center of the textile industry. Nowadays the city features well-developed ... Open »
Middlesbrough
Another modern hotel complex, Wainstones Hotel, is located away from the noisy center of Middlesbrough. In this part of the town you can enjoy peace and tranquility. Here there are many parks and almost no traffic. The center of the town can be reached by bus. Near the hotel are organized various tours for visitors. The third popular hotel of Middlesbrough is Baltimore ... Open »
Lincoln
English Lincoln is situated not far from several airports including Doncaster Sheffield Airport in Yorkshire, Humberside Airport, and East Midlands Airport. Each of these airports serves international flights from many countries of the world. Upon your arrival in England, you can always get on a train that goes directly to Lincoln. Besides that, there are daily buses that ... Open »

All about Leeds, Great Britain - sightseeings, attractions, touristic spots, architecture, history, culture and cuisine. Prepare your trip together with OrangeSmile.com - find out the 'must see' things in Leeds, which places to visit, which excursions to take, where the breathtaking views are waiting for you. Planning your trip with this travel guide will help your to get the most out of Leeds in few days.