Sightseeing in Caernarfon - what to see. Complete travel guide 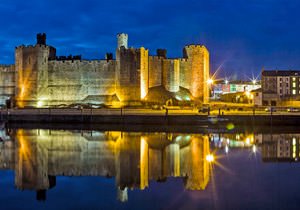 The ancient Welsh town situated at the shore of the Menai Strait is always ready to welcome foreign guests. Tourists from all over the world come here to explore the fabulous area that still has retained its glorious historical atmosphere. Don’t forget to visit the major landmark of the area – a medieval castle that shares its name with the town.
First settlers in Caernarfon appeared yet during the prehistoric times. At that time, the Ordovices, a Celtic tribe, were the main inhabitants. When Romans appeared in the region, they built a fort here. However, when Romans left the British land the fort was destroyed. Normans built their own castle on the ruins of the fort, establishing a settlement that turned into a town later.
In the second half of the 20th century, Caernarfon’s authorities made an application for the election to choose the capital of Wales. Unfortunately, another city won in the election. 1911 was an important role for Caernarfon because the investiture of the Prince of Wales took place at Caernarfon Castle. Almost sixty years later, Prince Charles also participated in the investiture ceremony that was also held in Caernarfon. Copyright www.orangesmile.com
Perhaps, the local dialect is the first thing that tourists notice when they arrive in the town. Despite the fact that Caernarfon is a part of Wales, which is a part of the United Kingdom, almost twenty percent of local people speak an old dialect. Welsh is still widespread in the region, so it is not rare to see shop signs and inscriptions in this language. 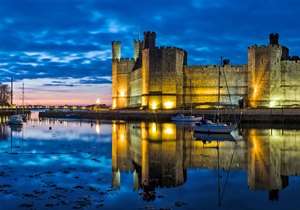 As it was mentioned before, Caernarfon Castle is the main landmark in the region. The large medieval construction is widely recognized as one of the most spectacular castles in Europe. The castle consists of nine towers. By the way, each of the towers has its own name. These are the Eagle Tower, Queen's Tower, Well Tower, Chamberlain Tower, Black Tower, Granary Tower, North-East Tower, and Cistern Tower. The gates, which look like separate towers, also have their own names – the Queen’s and King’s Gate. During an excursion in the castle, you will see interesting galleries for archers.
The giant castle was supposed to be the symbol of King Edward’s power and confidence, but the building wasn’t completed. Walls and towers have survived until our days in their original condition. Unfortunately, the inner halls of the castle became damaged with time. There are many legends about the marvelous giant castle. One of these legends tells how the eldest son of the king got the title of the Prince of Wales. A visit to the main attraction of the city is a great way to learn more about the royal family and its lifestyle. 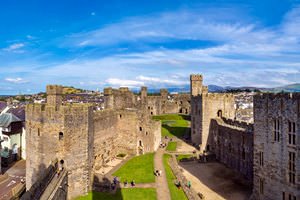 In Caernarfon, tourists can explore not only the castle but also the surrounding area that is no less charming. For example, tourists enjoy visiting Segontium, a Roman fort. This fort was founded by Agricola in 77 AD when Romans expanded the territory of their empire in the United Kingdom until Wales. The main purpose of the fort was to prevent free entrance to the Welsh coast and protect the region from invaders.
Only ruins of the ancient fortification have survived until our days. Despite this, it is still worth visiting this attraction, see the ruins with your own eyes, and try to guess how the fort looked like in the past. The ruins still have a mysterious atmosphere of ancient times. Regardless of the fact that the fort was destroyed many years ago, many elements of the construction have survived until modern times. There was a Roman temple not far from the fort – it was a sacred place for all soldiers who, despite their power and strength, were coming to this temple before every battle to pray. There was also a cemetery nearby where Romans buried the dead. 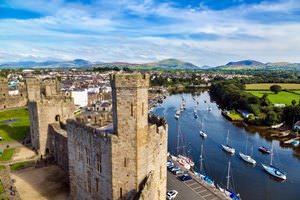 What activities can Caernarfon offer for tourists with children? For young guests of the city, there is a sea zoo that is home to more than one hundred fifty underwater creatures. In this zoo, visitors can see eels, different sharks, and sea vegetation. Young tourists enjoy visiting the lobster incubator – a special chamber that grows these fabulous creatures. Besides the animals mentioned above, the zoo has two different species of sea horses. Starting from 1995, the zoo has been saving injured and sick animals, such as dolphins, whales, seals, and turtles.
Tourists can get to Caernarfon from London by train. The journey time is approximately three hours. The train stops in Bangor, where tourists need to make a change. Buses from Bangor to Caernarfon depart every fifteen minutes. It takes roughly twenty minutes to get to the destination point. There is one more way to reach Caernarfon – by ferry. However, this transport type is very slow because the first stop is in Holyhead. After that, tourists need to switch to train to Bangor and then take a bus to Caernarfon.
This guide to iconic landmarks and sights of Caernarfon is protected by the copyright law. You can re-publish this content with mandatory attribution: direct and active hyperlink to www.orangesmile.com.

City tours, excursions and tickets in Caernarfon and surroundings

Survived castles around Caernarfon
♥   Castle 'Caernarfon Castle Caernarfon' , 0.2 km from the center. On the map

Sights around Caernarfon from our guide 'Extreme places on Earth' 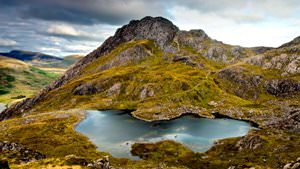 Distance from Caernarfon center - 36.9 km.
Lovers of nature prefer to walk in the local oak forests, where they can see century-old trees of enormous size and increadibly beautiful lakes. One can get a closer look at seals and seabirds in the coastal areas. Thanks to wide choice of tiny hotels, visitors always have an opportunity to stay a little longer in the picturesque countryside. Thick forests cover a considerable part of the reserve, they have become home for ferrets and martens. Ornithologists are attracted to these places by the prospect of seeing rare species of kites and peregrine falcons. … Read further

Search touristic sites on the map of Caernarfon

Sightseeing in regions nearby Caernarfon

Liverpool
Liverpool is a city in the North West of England. The city is located in the mouth of the Mersey River. This is the second largest export port of Great Britain. The historical part of the port city, including its main attraction, Albert Dock, was added to the list of UNESCO World Heritage Sites in 2004. Liverpool is the neighbor of the cities of Huyton and Bootle. The other ... Open »
Chester
Founded more than two thousand years ago by the Romans, Chester is, certainly, one of the most interesting cities of Britain. You will find here the proofs of the ancient creation of the city – the ruins (approximately 3.5 km) of the ancient city wall, the ruins of the amphitheater and the remains of the ancient bridge. The city perfectly mixes all cultures that have left ... Open »
Blackpool
It's definitely worth saying that Blackpool is known as the oldest resort in the United Kingdom. Starting from the 19th century this place was visited by rich British people, who found here high-quality universal rest. Wonderful embankment attracts hundreds of tourists even today. If in previous years this city has often been flooded by water, today the embankment is paved with ... Open »
Isle Of Man
The Isle of Man is located in the Irish Sea. It is equidistant of Ireland and England. The island's history is devoid of bright and colorful events; harmony and peace have always reigned there. These values continue to attract modern travelers seeking peace and solitude. Many historical and architectural landmarks have survived on the island; they represent the legacy of ... Open »
Bolton
When the parliament was yet about to be created, Rupert Pfalcskiy tried to seize the city. At that time took place one of the scariest facts in the history of the city – the Bolton Massacre, during which were killed over 1600 people. During the time of the World War II Bolton was turned into a large center of the textile industry. Nowadays the city features well-developed ... Open »
Dublin
This city has an impressive history, wide choice of architectural places of interest and multiple entertainments. The southern part of Dublin is the most attractive for visitors of this magnificent city. Here you will find several ancient churches, visit Museum of History, or take a walk in old quarters that are stretched along the bank of the river. The central street of ... Open »

All about Caernarfon, Great Britain - sightseeings, attractions, touristic spots, architecture, history, culture and cuisine. Prepare your trip together with OrangeSmile.com - find out the 'must see' things in Caernarfon, which places to visit, which excursions to take, where the breathtaking views are waiting for you. Planning your trip with this travel guide will help your to get the most out of Caernarfon in few days.