Sightseeing in Blackpool - what to see. Complete travel guide 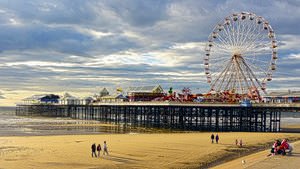 It's definitely worth saying that Blackpool is known as the oldest resort in the United Kingdom. Starting from the 19th century this place was visited by rich British people, who found here high-quality universal rest. Wonderful embankment attracts hundreds of tourists even today. If in previous years this city has often been flooded by water, today the embankment is paved with good-looking bricks and water doesn’t threat the locals and visitors of Blackpool anymore.
Top places to stay in Blackpool - most luxurious hotels
Blackpool presents a decent selection of high-class hotels that will pleasantly surprise even the most demanding guests. Chic rooms with a panoramic view of the waterfront are offered by …

Open
An interesting fact – this town is considered a marine one, however, it doesn’t have its own port. Blackpool got a status of an administrative center in 1998. This place is also known for giving birth to a famous brand of sport cars – Jaguar.
Probably, the most popular event in Blackpool is the festival of light. Each year it attracts many people from surrounding regions and tourists.

One of the most notable sights in the city is Blackpool Tower. This is a great historical sight. Even though it has built over 2 centuries ago, the tower is in great condition and is traditionally liked by travellers. The Promenade Street can also be called a sight, and you should also visit the local park of attractions – these places will definitely deliver to you good mood. Copyright www.orangesmile.com
Old hotels keeping the history of Blackpool
Many amazing historic hotels have been preserved in Blackpool, but the real city legend is Imperial Hotel Blackpool - The Hotel Collection. Although the opening of the hotel took place in …

Open
The most-visited cultural institution of the city is a centre of marine life, it is quite unlike the classic aquarium, which can be seen in other cities. It is a huge complex, which is equipped with 50 pools of various sizes; in this centre are more than thousands of sea creatures in total. Visitors can sign up for a fascinating tour, during which the most endangered inhabitants of the deep sea and dangerous predators are explained. Some inhabitants are allowed to be touched, for example, you can hold in the very real starfish in your hands. 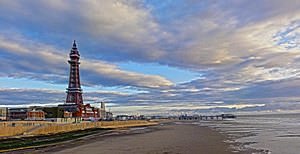 For fans of theatre art this will be a good opportunity to visit the Grand Theatre, it is one of the most beautiful historic buildings in the city. The opening of the theatre took place in 1894, the project of the building worked by a known architect Frank Matcham. The first performance, which was set within the walls of the theatre was "Hamlet"; today, its repertoire includes popular musicals and classical performances. One of the most surprising facts is that the royal theatre building with a beautiful interior decoration was built in just 7 months.
Best hotel choice for romantic escape, wedding or honeymoon in Blackpool
The very look of The Valentine Hotel puts you in a romantic mood, as it occupies a beautiful historic building with a faint-pink facade. The atmosphere in the rooms is simply inimitable. …

Open
Tourists with children should definitely visit the Blackpool Zoo, it will appeal to all lovers of nature. This zoo is very big and green; it occupies an area of over 13 hectares. The opening of the Zoo took place in 1972. Today its territory is home to over 1500 animals from all over the world. Spacious open-air cages decorated with live plants are equipped for animals, there is a spacious cage with tigers and even a pavilion with funny lemurs. At the zoo is a small Dinopark, where you can see models of prehistoric animals. 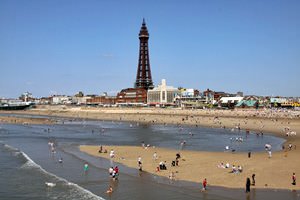 One of the main historic symbols of the city are considered to be the old Blackpool trams; according to some sources, they were the first trams in England. They run on the central square and streets of the city, and now, a trip to this historic tram is one of the favourite entertainment for tourists. It is most interesting to ride the trams in the evening, when they are decorated with spectacular illuminations.
Shopping in Blackpool - main shopping streets, outlets and boutiques
Hounds Hill Shopping is among the best-known trading complexes in Blackpool, just a short walk from the promenade. In this shopping center you'll find dozens of shops selling men's and …

Open
Among the other attractions worth mentioning is St. John Church, which is located in the eponymous square. It was built in 1821 and has completely preserved the original appearance, there is plenty of popular restaurants and cafes in the square next to the church.

This guide to iconic landmarks and sights of Blackpool is protected by the copyright law. You can re-publish this content with mandatory attribution: direct and active hyperlink to www.orangesmile.com.
Blackpool - guide chapters 1 2 3 4 5 6 7 8 9 10 11 12 13

Survived castles around Blackpool
♥   Castle 'Greenhalgh Castle' , 21 km from the center. On the map

Sights around Blackpool from our guide 'Extreme places on Earth' 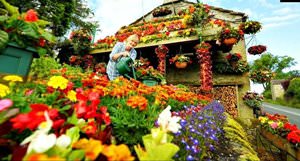 Distance from Blackpool center - 62.1 km.
For many years, gardeners have attracted many fans. One woman even sends spouses certificates for a floral shop, so they they can supplement their collection with new items. The most difficult part of caring about the garden is daily watering a vast number of flowers. Recently, the couple has equipped an area with a modern irrigation system, with which the gardening has become much easier. The house of Stranges is close to the road, so it’s well known to many motorists, who are often driving these places. It won’t be difficult for curious tourists to find it too. … Read further 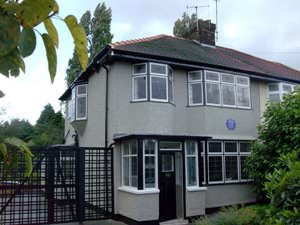 Distance from Blackpool center - 50.1 km.
The fans 'The Beatles' from all over the world strive to visit the house of John Lennon. A few details of the life and the work of famous musicians can be learned only from the experienced museum guide. Many tourists complete the excursion program with the visit of the house of Paul McCartney, which is located on one of the neighboring streets. Not far from the villa is another object for Beatles fans worth seeing - the old Obdach Strawberry Field, to whose honor the musicians have called a song. … Read further 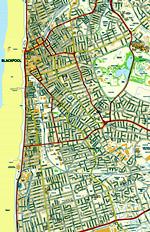 Search touristic sites on the map of Blackpool

Sightseeing in regions nearby Blackpool

Liverpool
Liverpool is a city in the North West of England. The city is located in the mouth of the Mersey River. This is the second largest export port of Great Britain. The historical part of the port city, including its main attraction, Albert Dock, was added to the list of UNESCO World Heritage Sites in 2004. Liverpool is the neighbor of the cities of Huyton and Bootle. The other ... Open »
Bolton
Bolton is a large and magnificent town built on the north-west of England in the Manchester country. Note the city is the administrative center of the Bolton region. Another large city, Manchester, is located for far away from Bolton. Initially this city was built in the second part of the 19th century. At that time the city was a district. In 1644 the territory of the modern ... Open »
Manchester
Manchester is a county city located in Lancashire. The city is situated on the bank of the Irwell River on the western slope of the Pennines hill. The city was founded in the X century by the Celts. In 79 AD the Romans built the Mankunium fort on the place of the Celtic settlement specializing in trading and crafts. Manchester City has received its modern name from the Saxon ... Open »
Chester
Founded more than two thousand years ago by the Romans, Chester is, certainly, one of the most interesting cities of Britain. You will find here the proofs of the ancient creation of the city – the ruins (approximately 3.5 km) of the ancient city wall, the ruins of the amphitheater and the remains of the ancient bridge. The city perfectly mixes all cultures that have left ... Open »
Leeds
Leeds is a city located in the valley of the Aire River. This is one of the largest cities of England. London is located not far away from Leeds, so such an advantageous location makes it very popular. Leeds is also on approximately same distance from east and west coast of the country. Yet in XIX century this provincial town was one of the main industrial centers of England. ... Open »
Isle Of Man
The Isle of Man is located in the Irish Sea. It is equidistant of Ireland and England. The island's history is devoid of bright and colorful events; harmony and peace have always reigned there. These values continue to attract modern travelers seeking peace and solitude. Many historical and architectural landmarks have survived on the island; they represent the legacy of ... Open »

All about Blackpool, Great Britain - sightseeings, attractions, touristic spots, architecture, history, culture and cuisine. Prepare your trip together with OrangeSmile.com - find out the 'must see' things in Blackpool, which places to visit, which excursions to take, where the breathtaking views are waiting for you. Planning your trip with this travel guide will help your to get the most out of Blackpool in few days.