Castellon de la Plana is an important industrial city in Spain. Nowadays, this is a popular tourist destination that attracts guests from all over the world. People come here to relax and to explore the architectural and cultural heritage of this region. Castellon de la Plana is located at the seaside of the Mediterranean Sea in the eastern part of Spain. The city has grown to such a size that it now occupies the coastline completely. Many streets and avenues now have direct access to the sea. As the city enjoys a beneficial location, the weather is almost always windless here, and the sea is calm.
The region, which is currently the location of Castellon de la Plana, was inhabited yet during the ancient time. Archaeological excavations only prove this. Scientists discovered settlements of the Neolithic time, as well as traces of Iberians, Romans, and Mauritanians. This settlement became a town in 1252 when the territory of Castellon de la Plana was united with Aragon. To protect the town, it was decided to build a thick wall. The majority of people lived outside the wall. Everything changed drastically in 1796. All fortifications were demolished and the territory of the city increased as the surrounding villages were added to it.
Napoleon’s troops invaded Castellon de la Plana in the 19th century. However, their domination didn’t last long. Napoleon’s army had to retreat soon, and Castellon de la Plana became the capital of the province. The First Carlist War started in 1833, and Castellon de la Plana had to participate in it. To protect the city, it was once again decided to build a protective wall. The city started developing actively at the beginning of the 20th century. It turned into a large industrial center. The first university in Castellon de la Plana was established in 1991. It is named in honor of Jaume I. Copyright www.orangesmile.com
All beaches in Castellon de la Plana are situated in Grao, the maritime district of the city. The total length of the coastline is ten kilometers, and all this area is dedicated to beaches. They do not have a well-developed infrastructure, but, despite this fact, tourists can spend many pleasant moments here. It is important to mention that beaches in Castellon de la Plana are not as crowded as in many other Spanish resorts. If you want to forget about big city stress, spend some time in silence, sunbathe, and swim in the sea, you can safely visit one of the following beaches: Playa Del Pinar, Playa del Serrallo, and Playa del Gurugu.

Each of the beaches mentioned above offers a comfortable setting and a pleasant atmosphere for visitors. Tourists will find parking lots and small park areas where visitors can hide from the scorching heat. Needless to say, each of these beaches has shower cabins. Do you have a family vacation and travel with kids? Young visitors will be excited to explore comfortable playgrounds and different amusements for kids. Are you fond of sport? The city’s government takes care of sports enthusiasts, so there are sports grounds at every beach. Soft golden sand covers these coastal areas. The sea is quite shallow near the coast, so parents do not need to worry about their children.
When you feel tired of beach recreation, it is time to explore the city’s attractions. In Castellon de la Plana, there are such landmarks as a Gothic-style cathedral and an old City Hall building. Many tourists, however, prefer to make an hour-and-a-half-long ride to the nearby town of Morella. This town is famous for its prominent landmark, the Morella Castle. This is a military castle built on a high rock. Tourists will need to sweat a bit to get to the top, but the scenery from the top of the rock is definitely worth the effort. This building was constructed in the 8th century and has managed to survive until modern time in almost pristine condition.

Initially, the castle served the purpose of protecting the region. There is a two-kilometer-long wall that surrounds the castle. The closer you are to the castle, the better panorama of the town you can see. At the top of the rock, tourists can see Morella under their feet. This truly spectacular view is ideal for observing many charming details of this town, such as old streets, houses, and unusual frescos. The incredible scenery of the ridges and mountains is nothing but breathtaking.
It is currently not possible to make a direct flight to this charming Spanish city from many parts of the world. Castellón–Costa Azahar Airport mostly accommodates seasonal flights from several European capitals. Valencia and Reus are the closest cities with international airports. Upon arrival, tourists can take a bus to Castellon de la Plana. A ride from Valencia will last one hour, and a ride from Reus will take somewhat longer – you will reach your final destination in two hours. It is also possible to reach Castellon de la Plana by train. The journey time from Valencia is also approximately one hour. There are trains from more distant cities such as Madrid and Barcelona.
This guide to iconic landmarks and sights of Castellón de la Plana is protected by the copyright law. You can re-publish this content with mandatory attribution: direct and active hyperlink to www.orangesmile.com.

Survived castles around Castellón de la Plana
♥   Castle 'Castle of Villafamés' Castellón, 14 km from the center. On the map

♥   Natural Park 'Prat de Cabanes-Torreblanca' , 29 km from the center. On the map 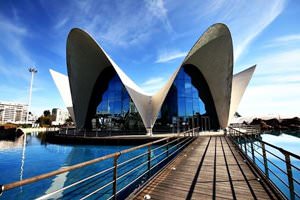 Distance from Castellón de la Plana center - 64.5 km.
There are also two huge tunnels, which create an integral part of walking tours. Another great feature of the center is Submarino underwater restaurant. That’s one of the best places in town for a romantic dinner. Exterior walls in the hall of the restaurant are made of the acrylic glass, so during dinner,  guests can enjoy the fish swimming by. Daily dolphin shows are enormously popular among visitors with children.  Everyone can find a place to rest in L'Oceanografic in Valencia. … Read further 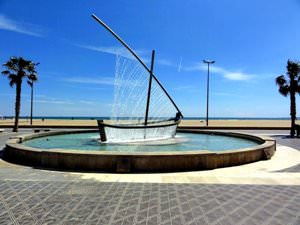 Distance from Castellón de la Plana center - 61.1 km.
This place is also called for by the photographers, who choose the best position for several days to capture the mysterious boat, whose sail is 'burning' in the sun. In the night the fountain is adorned with the impressive illumination, so you can visit the sights at nightfall. It must be noted that there are the similar boat fountains also in some other countries, namely in Portugal and Israel. Nevertheless the fountain in Valencia is the most famous and most visited. Its main particularity is the maximum simplicity of construction. … Read further

In the coming years, a new amazing hotel will begin to receive travelers in Saudi Arabia. It will be built right among the endless expanses of the desert. The exact date of the hotel opening is still unknown; the construction started on the territory of the Al-Ula oasis. The new hotel will be named Sharaan, in the honor of the surrounding nature reserve.

Peniscola
During the Middle Ages, the Arabs conquered Peniscola. They managed to control the territory until 1251. The settlement had another name during their reign – Baniskula. James I the Conqueror or James I of Aragon was the king who could return the territories captured by the Arabs. James I captured the town and imposed Valencia’s laws. In 1307, a Templar fortress appeared ... Open »
Valencia
Valencia is a picturesque resort on the sea coast. The resort is surrounded by large olive and orange groves. The climate of the city is mild and great for rest. Due to tall mountain masses that surround the city, the weather in Valencia is always calm and windless, there are almost no storms in the sea, and nights are traditionally silent and warm. Tourist business has long ... Open »
Alcala del Jucar
The castle of Alcalá del Júcar is an interesting attraction that is a must for all tourists who visit this Spanish town. This is a gorgeous construction of the Almohad origin that is built at the top of a rock. Moreover, a whole ensemble of houses in the rock surrounds the castle complex. These buildings are carved right in stones, turning lifeless and cold stones into a ... Open »
Salou
In Spain, to the south of Barcelona and near the ancient town named Tarragona is located the capital of Costa Daurada - Salou. The city is conveniently situated in a wonderful climatic zone and is famous for its excellent beaches. Located in a cozy bay stretching along the coast, Salou is adjacent to an ancient fishing village Cambrils on the south and to La Pineda Cape on the ... Open »
Benidorm
Fantastic climate, modern buildings, fascinating and stylish luxury hotels and resorts, amazingly white sand on clean beaches – all these factors make Benidorm unbelievably attractive in the eyes of tourists, making them visit this place again and again. This town is also famous for a huge park of water attractions named Aqualandia. Another park, Mundomar, is located ... Open »
Ibiza Island
Island of Ibiza is associated with sea, sun, night clubs and lively parties, that’s why it attracts lots of tourists in summer time. The capital of Ibiza is the city of the same name. Ibiza is widely regarded as luxurious resort, but it is also highly recommended for family vacation. There is a number of appealing quiet resorts on the island. They may be really expensive in ... Open »