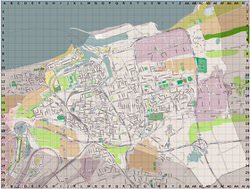 Interactive maps of hiking and biking routes around Calais

1. You can zoom in/out using your mouse wheel, as well as move the map of Calais with your mouse.
2. This interactive map presents two modes: 'Biking Routes' and 'Hiking Routes'. Use the '+' button on the map to switch between them.

This Calais map has two modes: 'Railway Network' and 'Landscape & Rural Map'. Use the '+' button on the map to navigate.

Our guide to Calais

Not all travelers know that the beautiful water park ICEO, operates in Calais. It is located on the outskirts of the city and offers its clients a full range of services for an interesting holiday. In the water park, there are wonderful pools and favorite slides, as well as a lazy river and a cozy cafe where one can restore his strength after the entertainment. In the warm season, part of the pools and water … Open

In order to find interesting souvenirs and trendy items, head straight to Rue Royale. This street is packed with small shops and boutiques that offer stylish and modern clothes and accessories. Passage Royale is one more excellent choice for fashionistas. Ladies who like beautiful designer tableware will be pleased with their visit to Rene Classe that offers porcelain tableware and accessories of internationally … Open

4. When using public transport, don’t throw your ticket until you reach your stop. There is ticket control on all public transport routes, and passengers without tickets are subject to fines. 5. It is better to refrain from taking a taxi on peak hours. The car will have a meter turned on even if it doesn’t move. There can also be traffic jams on rush hours, so it is better to walk or ride a bicycle … Open

Among the unusual cultural establishments of Calais is the Museum of Lace and Fashion, founded in 1874. Today, the exposition of the museum is made up of samples of beautiful lace, and you can even see sketches of old clothes and also unique machines, which made laces one hundred years ago. Several times a month, the museum conducts interesting master classes, in which participants can learn how to weave laces in … Open

Without a doubt, quality textiles have become one of the most famous symbols of the city. Since the industrial revolution, Calais has been one of the leading manufacturers of lace and tulle of the highest quality in the world. There are still several factories that embroider fabulous ornaments on feather-weight fabric. Handmade items are also widespread in the city – tourists enjoy buying them as souvenirs. When … Open

The London Bridge is an interesting dining facility that offers European cuisine. Delicious Italian pizza is considered the main signature dish of the restaurant. It is cooked by the chefs in full compliance with classic recipes. Every day visitors are welcome to try fresh salads and original snacks. In addition to original delicacies guests are welcome to order the best dishes from Italian and French cuisine. La … Open