Sightseeing in Valladolid - what to see. Complete travel guide

Once Valladolid was the capital of Spain; today this is a large industrial center that doesn’t stop surprising its guests by wonderful architecture and hospitable atmosphere.

Santiago Street is considered the center of the city. If you take a walk along it, you can reach Mayor Square. All most beautiful buildings of the city are located around the square or nearby it. The city hall is also situated nearby and a famous Valle Market occupies the opposite side. You won’t even notice how quickly the day passes away if you dedicate it to observation of the local places of interest. The square has many sights and trading centers that feature wide choice of various goods and souvenirs. Cozy cafes and wonderfully calm atmosphere will help you to relax and forget about stressful urban life. The local cathedral is considered one of main cultural sights of the city. The building of the cathedral started in 1582 and it’s not finished even now. Today the large building of the cathedral is partially in use as in its halls you can see several exhibitions and the main relic – a massive altar designed in baroque style. Nearby the cathedral you will find the Santa Maria de Antigua church and the Royal Palace of Pimentel that is now used as the residence of the Valladolid’s government. The National Museum of Sculpture is known as the most popular and widely visited museum in Valladolid. The museum exhibits a large collection of wooden sculptures. It’s worth mentioning that the building itself is a real piece of art. Its walls and ceilings are decorated with hand-made stone carving and magnificent frescos.
Authentic traditions, festivals and lifestyle of Valladolid inhabitants
Valladolid is a city with amazing history and truly incomparable culture. While visiting it, you will surely hear numerous legends and stories connected with the appearance of its beautiful …

Open
One more interesting square is called Universidad, and it is named so because on this square is located the building of the local university founded over 500 years ago. The façade of the university is decorated with symbols showing power and importance of different sciences. Opposite to the university is situated Santa Crus School – one more old and beautiful building decorated with stone carvings. There is a small chapel in the inner garden of the school.
Among the religious sights, it is worth noting the ancient monastery of St. Benedict, as well as the church of the same name situated on its territory. The monastery was founded in 1390, and the beautiful Gothic Church was in the early 16th century. Many of the decoration items of the Church that can be seen today have been within its walls from the moment of its opening. Here, an ancient altar, old wooden seats, and many other interesting elements of decoration were preserved. Recently a part of the greatest building of the monastery was converted to an art Museum, today it presents interesting paintings and sculptures of contemporary artists. Copyright www.orangesmile.com
Excursion over cultural sights of Valladolid - 'must visit' points of interest
Several centuries ago Valladolid was the capital of the country. Nowadays it is known as a major industrial and commercial center. However, the city is still home to unique historical … 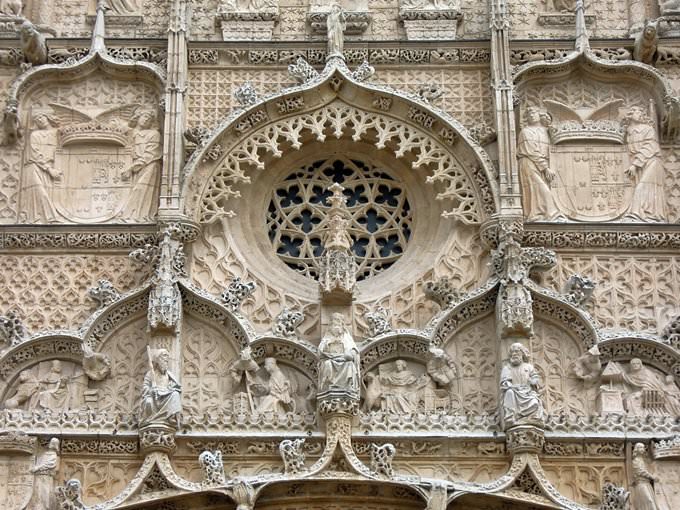 One of the most picturesque places in the city is the Campo Grande Park, the largest park of Valladolid. The area of this Park is approximately 11.5 hectares and it is located close to the city centre and railway station. The very first park in this place was founded in 1787, and today, the luxurious park amazes with a variety of exotic plants and flowers. In the warm season, it is always decorated with interesting landscape compositions. In the park you can see interesting structures and ornaments everywhere. Several ancient dovecotes, as well as very beautiful old fountains were preserved here.
Your active city break in Valladolid. Attractions, recreation and entertainment - best places to spend your day and night here
The birthplace of Anna of Austria best known from the most popular Alexandre Dumas' novel offers a lot of activities. Thus, if there is a desire to fly in a hot air balloon and admire the …

Open
One of the most unusual sights of Valladolid is the Home of Christopher Columbus. According to one of the legends, it was in this old house that the great discoverer died in 1506. However, this legend is not confirmed by any historical data. Today, in the historic building, which was built over 500 years ago, a collection of historical documents and maps, old books on navigation and nautical instruments that were used on ships hundreds of years ago are kept. Of special interest are models of old ships collected in the Museum.

This guide to iconic landmarks and sights of Valladolid is protected by the copyright law. You can re-publish this content with mandatory attribution: direct and active hyperlink to www.orangesmile.com.
Valladolid - guide chapters 1 2 3 4 5 6 7 8 9 10 11

National and city parks around Valladolid
♥   Natural Park 'Sierra Norte de Guadarrama' , 110.4 km from the center. On the map Search touristic sites on the map of Valladolid

Sightseeing in regions nearby Valladolid

Salamanca
The house decorated with shells is surely one of the most unusual architectural places of interest. This beautiful mansion was built in 1514, and its facade is decorated with hundreds of real shell valves. Diocesan Museum is widely known as the oldest cultural institution of the city. Here you will find a collection of paintings and statues, the most valuable of which is the ... Open »
Burgos
Initially, Burgos had solely strategic and military importance. In the ninth century, Diego Rodríguez "Porcelos", the count of Castile, ordered to build a castle on the site of modern Burgos. The main purpose of the castle was to become a Christian frontier and protect the land from invasions of Muslims. Thanks to Porcelos, Burgos became the center of the county and then the ... Open »
Leon
Leon is an important transport crossing with well-developed mining, leather making, chemical, food, and pharmaceutical industries and machine building. The old city is partially surrounded by a wall that has been built by Romans. San Isidoro basilica is one of the most notable sights of the Roman epoch. The basilica was built in 1055; its western part is the location of the ... Open »
Madrid
Puerta del Sol. Puerta del Sol is one of the main squares of Madrid. In the XV century, when the city was surrounded by a wall, Puerta del Sol was one of the city’s gates that was used as an entrance to Madrid. The square is decorated with numerous fountains and sculptures. The large post office Casa de Correos is also located here. This is the place where the government ... Open »
Toledo
A medieval fortress is the most famous historical monument of this place. Nowadays it has been turned into Museum of Siege. The exposition of the museum will provide you with information about the heroic past of the fortress. During its long history the fortress survived in more than one storm. Several times it was destroyed and rebuilt. Art lovers should definitely visit ... Open »

All about Valladolid, Spain - sightseeings, attractions, touristic spots, architecture, history, culture and cuisine. Prepare your trip together with OrangeSmile.com - find out the 'must see' things in Valladolid, which places to visit, which excursions to take, where the breathtaking views are waiting for you. Planning your trip with this travel guide will help your to get the most out of Valladolid in few days.