Sightseeing in Annecy - what to see. Complete travel guide 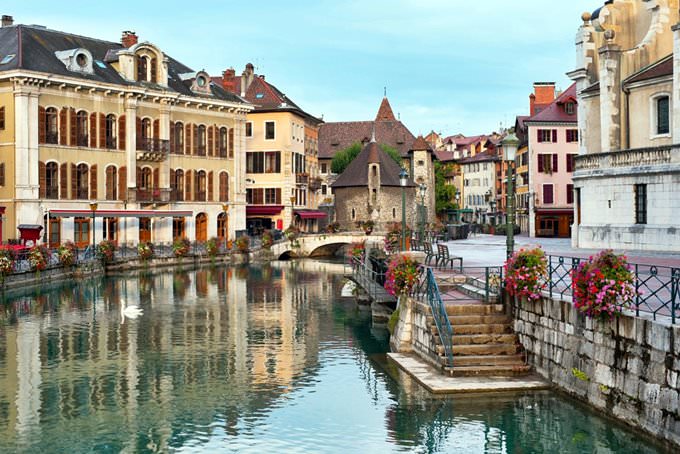 Lake Annecy is a charming place in east France not far from the border that separates this country from Switzerland. This is the location of a charming town that might look ordinary at a glance but tourists from all over the world come to visit it. The town’s name is Annecy. Some tourists may wonder why they should visit a town that doesn’t have any notable attractions. Annecy is an incredibly charming town where tourists can feel the atmosphere of the French countryside. Vacationers can relax at the lakeside and admire the beauty of flower compositions in the central part of the town.
Local people call Annecy “Venice in Savoy” or “Little Venice” because numerous canals and streams cross the town, making it look similar to the famous Italian city. All this water comes from Lake Annecy. A visit to Annecy would be incomplete without taking pictures with iconic Palais de l'Isle in the background. Many guides, who make excursions to this lovely French town, mention a well-developed tourist infrastructure of Annecy.
According to historical data, Annecy was home to the Counts of Geneva in the past. It is hard to believe in this nowadays, but territories had different borders in the past. When the French Revolution occurred, Savoy became a part of this country together with the town of Annecy. The House of Bourbon did all they could to restore the city. After that, Annecy and surrounding territories became a part of the Kingdom of Sardinia. However, Sardinian elites couldn’t maintain their authority for a long time. The second half of the 19th century marked the start of a new epoch for Annecy that became a part of Savoy. The French government bought this land and added it to the territory of the country. Copyright www.orangesmile.com
Start your acquaintance with the city from the medieval castle that is built on a hill. This is the heart of Annecy. The historical records state that the castle was built between the 12th and 16th centuries. Initially, the land belonged to the counts of Geneva and the dukes of Savoy. However, frequent fires made people leave this castle in the 17th century. In order not to keep the building empty, it was decided to turn it into barracks for soldiers. 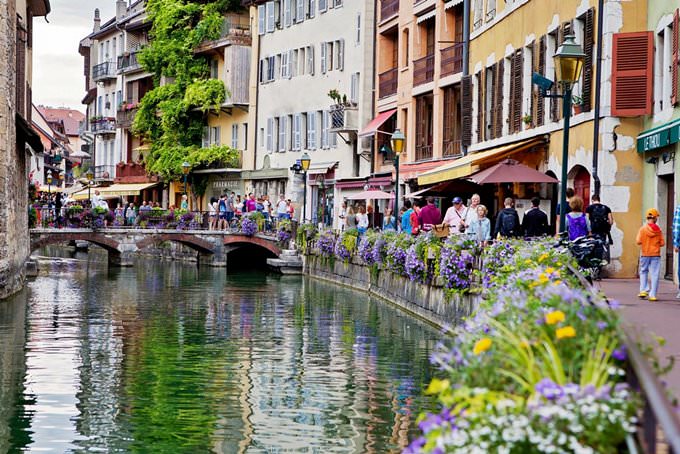 After the end of World War II, the town purchased the castle and fully restored it. At the moment, the Annecy Castle hosts the exhibition of the city museum. This is a wonderful place to look at internationally famous alpine art. Visitors can look at paintings by local masters and see authentic furniture that local people used in the 15th century. Don’t forget to visit the Queen’s Tower – the oldest part of the castle. This is the most durable part of the medieval building – the tower’s walls are more than 4 meters thick.
The Palais de l'Isle mentioned previously dates back to the 12th century. The building looks nothing like a castle. It was built many centuries ago in the middle of the Thiou Canal. Palais de l'Isle is a large building that almost completely occupies the island in the canal. The counts of Geneva lived in this castle for many years in the past. During certain periods of time, Palais de l'Isle was a prison and a court. Nowadays, a tourist office is open in it. 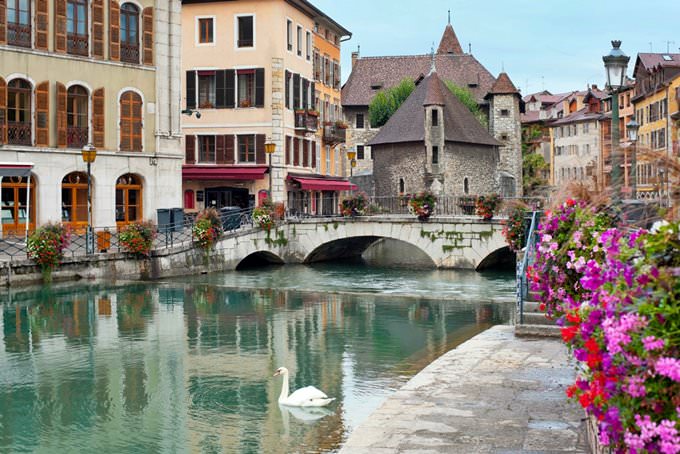 All couples, especially new ones, will find it interesting to visit Pont des Amours or the Bridge of Love. Just like Palais de l'Isle, the bridge is a popular tourist destination. This is a relatively new landmark but it has already got legends and traditions associated with it. Lovers need to cross this bridge together if they want to strengthen their feelings and stay together for years to come. It is also possible to look at the attraction from a distance – the bridge looks fabulous. You will see boats painted in different colors and the lake surface that reflects the surrounding world.
Annecy Church is another sight that deserves the attention of visitors. This is the Roman Catholic Church of St. Maurice that was built many years ago. Initially, the church had a gothic look that was typical for the 15th century. At that time, the building looked like a Dominican chapel. There are still some drawings of that period in the church. One of these paintings is in the left part of the building, near the choir site. 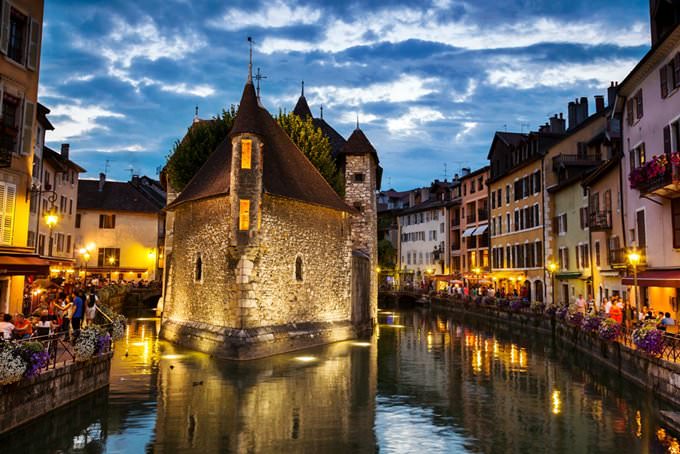 It is easy to get to Annecy from Geneva. There are many buses that connect these two cities. On weekends, there can be up to five buses a day. The transfer time is roughly one hour. The closest airport to Annecy is also situated in Geneva canton. It will take only half an hour to reach the city using a high-speed road. Other airports that have buses to this town are located in Lion and Grenoble. There is also an airport not far from Annecy, but it currently has flights to Paris only. If you enjoy traveling by train, there are trains from Paris and Lion to Annecy.
This guide to iconic landmarks and sights of Annecy is protected by the copyright law. You can re-publish this content with mandatory attribution: direct and active hyperlink to www.orangesmile.com.

Survived castles around Annecy
♥   Castle 'Château de Annecy' Haute-Savoie, 0.3 km from the center. On the map

♥   Castle 'Château de Menthon-Saint-Bernard' Haute-Savoie, 6.9 km from the center. On the map

♥   Castle 'Château de Montrottier' Haute-Savoie, 7 km from the center. On the map

♥   Castle 'Château de Sallenôves' Haute-Savoie, 16.2 km from the center. On the map

National and city parks around Annecy
♥   Regional Nature Park 'Massif des Bauges' , 23.6 km from the center. On the map

Art galleries in Annecy and around
♥   Art museum 'Fondation Baur' Geneva, 33.2 km from the center. On the map

Sights around Annecy from our guide 'Extreme places on Earth' Distance from Annecy center - 58.8 km.
You can not only walk through the tunnels between levels, but also use a special lift that is much more convenient and faster. There is a special plate with the exact height of the platform and its number at each level. It's also worth to have a long and incredibly interesting tour to Aiguille du Midi that many tourists tend to visit in the summer. The fact is that it’s always very cold and very windy at the top, so it would be more comfortable to climb it in the summer, when it's not so chilly. … Read further Distance from Annecy center - 54.7 km.
Yvoire is one of the few villages in France, where for hundreds of years, the inhabitants have been cherishing good historical traditions. For example, in summer they decorate houses and streets with flowers. That’s why travelers are advised to visit the village during warmer months. Travellers who decide to see one of the most beautiful villages in France, will be able to admire the preserved medieval fortifications, visit wonderful local restaurants serving homemade food, and choose unique souvenirs in the local craft shops. … Read further

Search touristic sites on the map of Annecy

Sightseeing in regions nearby Annecy

Albertville
Albertville offers wide range of resting activities for all categories of tourists. Shopping fans must visit the center of Albertville, where the most famous shopping streets are. Zara, Boucheron, Garrard, and Binatone trading centers are usually the most popular among visitors. If you seek historical sights, take a walk in a piedmont region, where you can see old streets and ... Open »
Geneva
Tavel House. The old part of the city has another noteworthy object - Tavel House (Maison Tavel) , the oldest residential building in Geneva that has survived to our days. First mentions of the building appear in 1303. In 1334 the building was renovated. The beautiful structure with Gothic facade has become home to the Museum of Geneva (Musee du Vieux Geneve) . Here ... Open »
Chambery
Elephants in the famous fountain located in this town are the main attraction of this place. Narrow medieval streets of the old town will delight the soul of tourists who adore European architecture. Chambery prefecture is located in the ducal palace of the XIV century. Pavement made of cobbles and lanterns perfectly complement the architecture of buildings. The Holy Chapel, ... Open »
Chamonix
The cultural life of Chamonix is also very rich in activities. Here are conducted numerous sports competitions, music and cultural events. Among them are the famous 24 hour motor race on ice, Christmas events, festivals, short films, all kinds of tournaments, and much more. A big part of the events (L'arrivee du Pere Noel (Father Christmas meeting), a children's carnival, ... Open »
Meribel
A large number of lifts allows vacationers travelling throughout the Three Valleys. Advanced skiers will find much excitement in Mont Vallone slopes that are related to the level of advanced complexity. Spacious and picturesque routes of La Challe will perfectly suit the majority of tourists, and Col De La Loze slopes are considered most unique and snowy ones. Besides ... Open »

All about Annecy, France - sightseeings, attractions, touristic spots, architecture, history, culture and cuisine. Prepare your trip together with OrangeSmile.com - find out the 'must see' things in Annecy, which places to visit, which excursions to take, where the breathtaking views are waiting for you. Planning your trip with this travel guide will help your to get the most out of Annecy in few days.