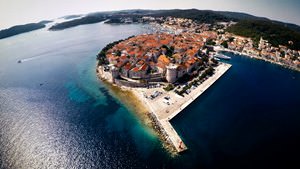 A vacation on Korcula is popular among divers all over the world. In the water area of the island, you can see the vast majority of the Mediterranean marine life. The water here is fairly clear, the visibility is good. The prices for rental equipment and boat for diving are quite low, thanks to the moderate flow of tourists. Many divers are attracted to the waters of Korcula as the arena of the largest naval battles of Antiquity.
Family holidays with kids in Korcula Island. How to entertain your child, things to show to children.
For many years, Korcula Island has been under the rule of various states. A large number of historical and architectural monuments of different epochs starting back from the Neolithic period …

Open
If you have never dived before but you want to try, then on the island you can get a training for the beginners and get an international license that will allow you to dive anywhere in the world. If the soul does not desire the underwater swimming but you still want to get acquainted with the flora and fauna of the Mediterranean Sea, then try yourself in snorkeling. You do not necessarily need to carry The fins, a mask, and a tube with you – the equipment can be easily rented on any beach. In addition to diving and snorkeling, you can try yourself in surfing, windsurfing, and sailing on Korcula.
Do you like fishing? Then safely go fishing in the open sea. To do this, you can simply rent a boat, or you can enlist the support of an instructor, who will acquaint you with all the subtleties of catching the local water inhabitants. If there is no desire to go far into the sea, you can go fishing from the shore. However, if you want to enjoy the beauty of Korcula to the fullest, you can’t avoid the sea voyages. At a minimum, you should hire or rent a boat if you can manage it, and go swimming along the shores of the island. There are many beautiful bays and here, where you can get only by sea. Copyright www.orangesmile.com
Cuisine of Korcula Island for gourmet with top restaurants and cafe
The cuisine of the Adriatic coast was influenced by neighboring Italy and France slightly larger than the cuisine of central Croatia. In Korcula, you can easily order the usual Croatian meat …

Open
You can spend a day or half a day on a voyage to the neighboring islands. In Badia, you can see the ancient monastery, on Oshak you will find healing mud, and Mljet will give you the opportunity to visit the secluded beaches, where sometimes you won’t meet a single person for the whole day. On Badia and Oshak there are also big nudist beaches. Korcula will give many pleasant minutes also to those, who like to travel on foot or by a bicycle. The island is small, traffic on the roads is slow, and therefore you can get to any point of your interest either by a mountain bike or on foot, simultaneously contemplating local beauties. If you want, you can rent a car. 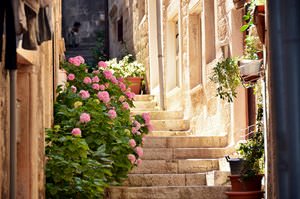 The beaches of the island are mostly stony, like the entire Croatian coast. Even on the beaches that are located close to the capital as Zakrjan, Mandrac, Ispod Duvana, and in the bay of Luka Korculanska there are usually not too many people even in the hot season, especially in the morning. Luka Korculanska, by the way, is one of the few sandy beaches of the island. In the middle of the day, you won’t find a spot on the sandy beach Vela Pržina near Lumbarda. For those who prefer tranquility and privacy, Tatinja Bay will suit most. This beach is also very popular among the uncertain swimmers – the shore here is very gentle.
Authentic traditions, festivals and lifestyle of Korcula Island inhabitants
The culture of Croatia absorbed many customs and traditions of the neighboring peoples. Take, for example, the tender love of the local residents for coffee and chocolate, which appeared due …

Open
In summer, you can see the ancient costumed military performance Moreska, which appeared in the 12th century, got to Croatia in the 15th century, and now remained only in Korcula. For the fans of active night-life, the bars and nightclubs are open. In Korcula, those are Cocktail bar Massimo, Apolon Bazeni d.o.o, Capers Cocktails & Dinner Nightclub, Gaudi, ACI Marina Korčula, Badija. The wildest parties here take place in the summer when the stream of tourists to the island is maximum. In the warmer months in the evenings, many coastal cafes organize discos in the open air right on the beaches. The fans of rock, rap, blues, techno, and all kinds of pop music will find a party to their taste.

This guide on active recreation and leisure in Korcula Island is protected by the copyright law. You can re-publish this content with mandatory attribution: direct and active hyperlink to www.orangesmile.com.
Korcula Island - guide chapters 1 2 3 4 5 6 7 8 9

Attractions and entertainment in Croatia

Mount Plak will be an ideal place for rock-climbers. Excellent conditions for climbing are also available in the Paklenica National Park. Tourists will be able to descend to a depth of more than 1 km in the Cerovac caves of the Velebit mountain. The walk down the cave gives a lot of new emotions and impressions. Fans of windsurfing should go to the island of Brač, which is considered the center of this sport. The largest windsurfing track to another island, Hvar, starts there. Skiing in Croatia is not the most popular sport, but fans of extreme skiing can ride at the resorts of Platak, Bjelolasica and the peak of Sljeme. … Open

Hvar Island
If you like just lying on the beach more than anything in the world, then remember that on Hvar the major part of the coast is rocky. However, there are sandy beaches here. The most popular of them is Milna, which is located next to the village of the same name. For the late lunch, you can get on foot to the Zlatan Otok winery. Due to the low cost of recreation, for a long ... Open »
Makarska
There is a small Nugal beach near Makarska, which you can reach in less than 10 minutes. This pebble beach has long been chosen by nudists, but travellers are attracted to these places not only by the opportunity to sunbathe without a swimsuit. A very beautiful hiking trail starts near the beach. It passes through the forest and olive groves. You can combine lazy beach ... Open »
Brac Island
Be sure to visit the quarries near Pucisca, where white limestone is mined. This stone is tiling the White House in the United States. In the quarries, you can try on the worker's robe and get acquainted with all the subtleties of stone mining. If you love football or play tennis, then you will find a large number of sites for practicing these sports in Brac. The most active ... Open »
Vis Island
Bili Bok beach is made of stone blocks. It is a nude beach. Mala Travna is a beautiful beach surrounded by the plains that slope gently into the crystal clear water. Vela Smokova is perfect for those who want to combine beach holidays with walking. There are several diving sets on Vis. Furthermore, you can try sailing, waterskiing, play beach volleyball, basketball and ... Open »
Split
Those who prefer to spend time outdoors are sure to enjoy the Marjan Park. It is the largest park in the city, where several historical sites are situated. Here you can have a great picnic or devote some time to sports. The park has landscaped areas for secluded rest and viewing platforms as well. A popular holiday destination among visitors of the city is the Filomena SPA. It ... Open »
Elaphiti Islands
Take a walk along the cape in Crkvine, which extends 180 meters into the sea. Enjoy heavy vegetation of Tajan and come close to a dimming lighthouse with red lights. If you want to be closer to the sky, climb 206 meters above the sea on Olimp and enjoy the view of Dead Lake in Lorkum. The island is situated nearby the archipelago, so some scientists consider it as a part of ... Open »

Guide to your best city break in Korcula Island - popular places for recreation and leisure. Things to do during the day in Korcula Island - attractions, parks, beaches, aquaparks, racing tracks, biking trails or waterski. Recommendations (with addresses, phone numbers and links) where to spend your time in the evening (bars, discos, clubs, etc.). We share some good ideas and the question 'What to do in Korcula Island?' disappears immediately.