Video of flights over top monuments of Orlando in HD format.
Use 'Full Screen' mode.
Spaceship Earth, Orlando Science Center , Florida Citrus Bowl, and Kennedy Space Center are the architectural landmarks for not only tourists, but also for residents of Orlando. The majority of these monuments were created several centuries ago. They witnessed many important events, so besides the architectural value for USA, these landmarks are of a great historic importance. In this review, you will be able to get acquainted with the main architectural sites of Orlando. Also, we will look at them from an unusual point of view – only interesting facts and photos, which come together with a 3D visualization of every monument. Use our unique technology to fly over all architectural places of interest of Orlando – the video is at your fingertips. 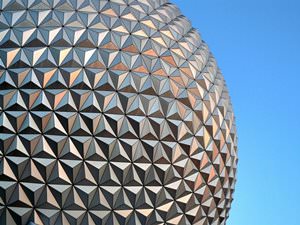 Facts:
» Spaceship Earth is an attraction and symbol of the EPCOT Park. EPCOT is the second of the four themed parks of the Walt Disney World in Orlando.
»  The attraction resembles a golf ball with its shape. It was built as a geodesic ball that has a diameter of 50 m.
»  All visitors seat in a special truck that moves into the dark. They can travel to the past and observe the development of all humankind. Although the trip lasts 13-15 minutes, it is still very interesting and exciting.
»  When the journey comes to an end, passengers have an opportunity to “draw” their future. Their answers to the questions influence the possible result. 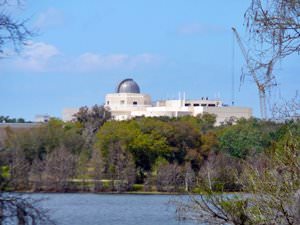 Facts:
» The Orlando Science Center is one of the most famous and popular museums in the city.
»  Here, you can learn about the ecosystem and nature of Florida, light, sound, magnetic waves, and astronomy.
»  In four floors, you can see a lot of interesting exhibits and visit amazing exhibitions. You can also watch documentaries on the huge screen.
»  In the territory of the science center, there are wonderful attractions, one of which is “Dr. Phillips Cinedome” that is also a planetarium.
»  Besides, the museum is a unique chance to feel like a meteorologist in the Severe Weather Center. You should also visit an observatory to see a huge telescope and use fighter simulators F1-11 and F-16. 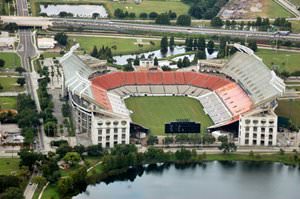 Facts:
» The Florida Citrus Bowl is an outdoor sports stadium located in the center of Orlando.
»  Originally, the stadium was built for holding football matches. Now, bike races, concerts, and other events are often held here.
»  The stadium sometimes serves as a film set.
»  At the stadium, there are 65 438 constant seats. With temporary stands, its capacity is 70 229.
»  Not so long ago, the stadium was restored and updated. As a result, a new lower level and new restrooms were added. The facade of the stadium was restored too. 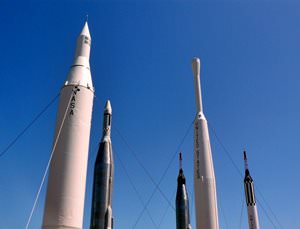 Facts:
» Fans of the rocket-and-space theme should definitely visit the Kennedy Space Center.
»  It is famous for the fact that you can still take a shuttle here.
»  In the territory of the center, there is a museum dedicated to American Astronautics, a rocket part, and several attractions for those who want to become a NASA astronaut for some time.
»  In the complex, there are also two constructions opened by the Astronauts Memorial Foundation. The most famous of them is the “Cosmic Mirror” monument that is also known as a monument to astronauts. It is a huge black mirror of granite with astronauts’ names engraved on it.
»  Also, in the territory of the complex, visitors can also visit an education center where they can learn everything about space.

Facts: » St. James Cathedral is a Roman Catholic church located in the center of the business district of Orlando.
»  The story of the cathedral began on 20 May 1881 when Bishop John Moore bought the land for the construction of the church.
»  St. James Cathedral was finished in June 1891. At that time, the church was 21 m long and 12 m wide. It was decorated with a 14-meter bell tower.
»  In 2010, the church was restored completely. New stained glass windows were installed.
»  At the cathedral, there is a parochial school, a youth and children’s choir. Baptism and wedding ceremonies are often held here.

CONTINUE - PART II »»
This guide to architectural sightseeing in Orlando is protected by the copyright law. You can re-publish this content with mandatory attribution: direct and active hyperlink to www.orangesmile.com.
Orlando - guide chapters 1 2 3 4 5 6 7 8 9 10 11

Build your walking routes in Orlando on the landmark map

Architectural landmarks in the regions around Orlando

Atlanta
The Georgia State Capitol was built on the site of the city hall in 1889. The exterior of the Capitol building in Atlanta is very similar to the Capitol in Washington. The government residence was equipped with elevators, water supply system, gas, which was an ultramodern innovation for that time. The Capitol building used to be the tallest in Atlanta – 83 meters. The golden dome is decorated with a small Statue of Liberty. The fourth ... Open »
Houston
The Reliant Astrodome is the first stadium with adjustable environmental parameters. It is also the first indoor stadium with a dome. Its roof was aimed at protecting the stadium from the heat rather than the rain. However, the roof obstructed the growth of natural grass in the field, so the ground was covered with experiment nylon. At the stadium, not only baseball, basketball, football, boxing competitions, but also different entertainment ... Open »
Philadelphia
The city administration holds its meetings in a special building – Philadelphia City Hall. It’s a 167-meter building with a dome crowned by an 11-meter statue of the founding father William Penn. It weighs 27 tons. The statue faces the south. Thus it is lit by sunshine during most of the day. The bronze figure is empty inside. There’s a passage inside leading to the top of the hat that you can get to through a hatch. The city hall ... Open »
New York
The Statue of Liberty is located on Liberty Island and is one of the most famous sculptures in the USA and in the world as well. The Statue of Liberty is often called the symbol of New York City and the United States, the symbol of freedom and democracy, and the Liberty Lady. That was a gift of the French on the centenary of the American Revolution. The goddess of freedom holds a torch and a tablet and stands with one foot on the broken chains. ... Open »
Dallas
The 171-meter tower having 42 floors was completed in 1978. Reunion Tower is a part of the urban hotel complex. There’s a railway station located near the building. Two restaurants can be found on the upper floor of the skyscraper. One restaurant is situated above the other one, and they slowly make a circle along the axis of the tower. Above them, there’s the GeO-Deck observation deck. You can go up there in 68 seconds using a ... Open »
OrangeSmile.com - online travel reservation expert providing reliable car rental and hotel booking services. We feature more than 25.000 destinations with 12.000 rental offices and 200.000 hotels worldwide.
Secure Server