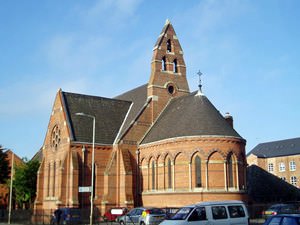 The first settlement on the site of the modern city emerged during the reign of the Roman Empire. Leicester is one of the oldest cities in the country. In the center of the city there is the oldest historical monument, Leicester Castle, built in the second half of the 11th century. The old building is surrounded by the incredibly beautiful garden; tour participants are offered a glimpse into a cozy patio and visit to the nearby church of St. Mary. This religious monument belongs to the later period; the church was built in the 12th century.
Guide to Leicester sightseeing - things to see and to visit
Leicester is a city in England that is also the administrative center of Leicestershire. The city was founded approximately two thousands of years ago on the former Celtic settlement. At …

Open
The most striking monuments of the Middle Ages are so-called Leicester bridges. In total, three bridges have survived in the city: Packhorse Bridge, King William's Bridge and Belgrave Bridge. An interesting object is the Beaumont Leys; it's a massive embedment where a few centuries ago there has been a monastery of Templars. Today, the old building is left in ruins. After touring historic sites anyone can go down to a nearby pond and enjoy the picturesque scenery.
Those, who prefer to spend time outdoors, are sure to enjoy the beautiful Abbey Park, next to which there is another significant attraction. In 1143, Abbey of St. Mary was founded there. Till this day only a few items have managed to survive; the major part of the building is in ruins. Beautiful architectural monument is the Cathedral. High-scale structure with an original design of the facade and refined interiors can safely be called one of the most beautiful buildings of the city. Copyright www.orangesmile.com
Family holidays with kids in Leicester. How to entertain your child, things to show to children.
The town of Leicester located in the heart of the United Kingdom can be a good option for a family holiday. Here you can find entertainment to suit every taste - kids should be brought to …

Open
You should definitely include a visit to the historic Leicester Guildhall in the excursion. It was built in the 14th century; after a complete reconstruction, the building was converted into a museum. Now it houses an interesting collection of ethnographic and historical exhibits. The complex Jewry Wall is an open-air museum built on the site of Roman Baths. All those, who aren’t indifferent to the ancient times, are interested in visiting. Belgrave Hall Museum introduces visitors to the life and culture of the Victorian era, and Abbey Pumping Station Museum is dedicated to the most striking scientific discoveries. Tourists, who like to visit unusual excursions, have to look into the National Gas Museum, as its collection is also unique. 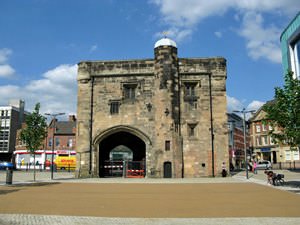 Among other museums in Leicester, of interest is the King Richard III Visitor Centre telling the true history of the last male representative of the Plantagenets. The place wasn't chosen by chance: it was here, in the once existing church, that the king was buried (the chapel was later destroyed). Today, his remains confirmed by the University of Leicester using computed tomography scan are stored in the already mentioned Leicester Cathedral. By the way, near the cathedral there is a monument to the king, so dishonorably slandered through public opinion manipulation.
Cuisine of Leicester for gourmet with top restaurants and cafe
One of the best restaurants specializing in British cuisine is considered The Boot Room. Its room decorated in a contemporary style and helpful attitude of the staff will be a great …

Open
The National Space Centre should definitely be included in any sightseeing route of the city. A visit to this cultural institution can become a true space odyssey. It tells about the history of space exploration, and many of the exhibits are genuine but not interactive or informative like those typically presented in other museums of this kind. Spacesuits, spacecraft, minerals - these are some examples from the museum's collection. 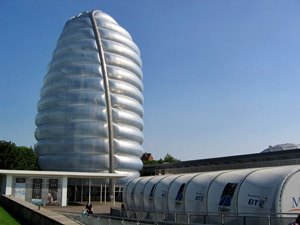 The Retro Computer Museum is another excellent cultural institution, thanks to which one can find a lot of interesting information. This time, visitors are provided with information on the evolution of computers. Those who are keen on aircraft would probably be interested in studying their technology at the Bruntingthorpe Air Museum where the main emphasis is on demonstrating the collection of aircraft of the Second World War and post-war period. It's a good idea to walk through the University of Leicester Botanic Garden with its magnificent landscape design, centuries-old trees, an amazing collection of exotic plants and cacti, as well as a stone garden.
Authentic traditions, festivals and lifestyle of Leicester inhabitants
Main highlights of the Leicester’s cultural life are national holidays. Locals look forward for them with enthusiasm and delight, and tourists don’t cease to amaze with the …

Open
The Curve Theater is of special interest from the architectural point of view (however, theatrical performances staged here are no less interesting for fans of theatrical art). Its building - functional and at the same time beautiful - is a vivid example of modern architecture. The theater’s construction dates back to 2008, the architect was Rafael Vignoli Basseira, and the first show that took place here was a performance entitled "Lift Off". By the way, those looking for more spectacular shows should head to Foxlands Farm and watch the so-called “Victory Show” traditionally held on the first weekend of September and marking the end of World War II. 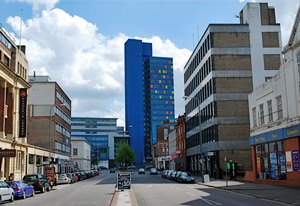 The Newarke Houses Museum & Gardens is worthy of a visit as well. Here you can find a lot of interesting information about the city's history, from the Tudor period to the beginning of the 20th century. Of particular interest is a recreated First World War trench. The complex consists of two buildings: Wygston's Chantry House and Skeffington House. A wonderful historical and religious monument is St. Peter's Church and Heritage Centre where you can feel the atmosphere of touching the history. The Romanesque church dates back to the 14th century. Many visitors to the temple are impressed by stained glass windows and an altar located inside.
Your active city break in Leicester. Attractions, recreation and entertainment - best places to spend your day and night here
After exploring historical sites and visiting various cultural institutions, guests of the city are definitely recommended to go to one of the entertainment centers. Phoenix Square cinema …

Open
St. Nicholas Church is another beautiful monument of sacred architecture. The analysis of its materials shows that the church is dated 880 AD. However, studies suggest that the local shrine was built even earlier, in ancient Roman times. Nevertheless, having stood for many centuries, the church was in poor condition by 1825 and there were even proposals for its demolition. But instead, in 1844, the church was renovated. Well, now it is one of the most interesting buildings on Leicester's tourist route - from historical, religious and cultural points of view. Another monument reflecting the ancient Roman times in the history of Leicester is the Jewry Wall, which is located just near St. Nicholas Church. 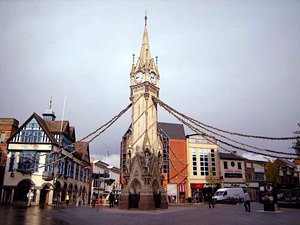 In the British city, you can also find quite an unexpected building - namely, the Hindu temple BAPS Shri Swaminarayan Mandir. It does not look like colorful shrines typical of countries where Hinduism prevails but still worth a visit. The reason is the modern style - during its construction, architects focused on originality, traditions, and functionality. Those wishing to get acquainted with the life of locals in the 18th century are encouraged to visit the nearby village of Markfield where a group of cottages called Stoneywell is located. Recreated interiors creating the wonderful atmosphere of history's touch, picturesque gardens, as well as wonderful architecture - all this cannot be missed while traveling around Leicester.

In the section below, you can get one of our excursion, activities or city discovery tours over Leicester and surroundings. Our website offers 10-30% lower ticket prices, when compared to the offline purchase on the spot.

This guide to cultural sights Leicester is protected by the copyright law. You can re-publish this content with mandatory attribution: direct and active hyperlink to www.orangesmile.com.
Leicester - guide chapters 1 2 3 4 5 6 7 8
Reference information
Map of all palaces

Public palaces near Leicester
♥   Palace 'Nottingham Castle' , 35.2 km from the center. On the map

Cathedrals and basilicas near Leicester
♥   Cathedral of Our Lady and St. Thomas, Northampton, 45.7 km from the center. On the map 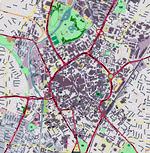 Photogallery of cultural heritage of Leicester

Excursions over cultural sights of neighbours of Leicester

Nottingham
The main landmark and tourist attraction of the city is known far beyond its boundaries. This is the Nottingham Castle. This massive fortifying construction aged hundreds of years is reequipped now in a museum and keeps an inestimable collection of historical artifacts. In front of the gates of the castle tourists will discover a monument of the famous literary hero – Robin ... Open »
Coventry
Two old buildings are connected by an arched walkway. If you walk through it, you can find yourself in a landscaped courtyard, the appearance of which hasn’t changed over the past three centuries. The compulsory excursion program also has to include visit to the Ford's Hospital, which is a striking landmark of the early 16th century. For years, the hospital has remained the ... Open »
Birmingham
Among the architectural places of interest we should definitely mention St. Martin’s Church, which was built in the second half of the 13th century. It is believed that the site, on which is built this beautiful cathedral, is mystical. Each year a huge number of pilgrims come to the church. Visitors constantly notice a feeling of incredible strength and grace of the divine ... Open »
Wolverhampton
Vacationers must visit Bantock Park where the Historical Museum is located. It keeps a wide variety of collections: knight armor, national costumes, jewelry, and historical documents. Exhibits presented here will acquaint visitors with the rich and diverse history of the city, which was a permanent venue for vivid knightly tournaments in medieval times. In the 14th - 17th ... Open »
Sheffield
Once it was the large-scale industrial city. Today Sheffield is an attractive tourist and cultural center. The city has everything you need for an exciting holiday, including an abundance of historical sites. The Beauchief Abbey is situated in the southern part of the city; it was founded in 1183. The abbey was a large-scale complex of monastic buildings, but only a beautiful ... Open »
Luton
The history of Luton has more than eight hundred years so many historical attractions of various periods have been preserved in the city. In the city center, you will find a vivid monument of medieval architecture - St Mary's Church. The very first church was built in this place over a thousand years ago, and the construction of the one tourists can see today started back in ... Open »

Culture guide to Leicester. Which fascinating sights to visit once you are in Leicester: temples, churches, museums, theaters and castles. Recommendations (with addresses, phone numbers and links) on the places 'must visit' in Leicester. Plan your own city excursion by using this page info!