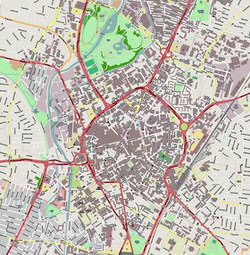 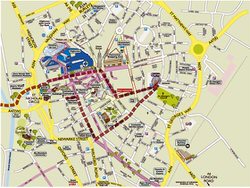 Interactive maps of hiking and biking routes around Leicester

1. You can zoom in/out using your mouse wheel, as well as move the map of Leicester with your mouse.
2. This interactive map presents two modes: 'Biking Routes' and 'Hiking Routes'. Use the '+' button on the map to switch between them.

This Leicester map has two modes: 'Railway Network' and 'Landscape & Rural Map'. Use the '+' button on the map to navigate.

Our guide to Leicester

Nowadays Leicester is a typical English city with an old center full of buildings made in the Victorian style and a new city with modern quarters located closer to suburbs. The historic part of the city features numerous beautiful buildings of XVIII-XIX centuries. They include the city’s municipality The Guildhall, Maria de Castro Church, the first hotel of Leicester The City Rooms, Leicester Abbey and a … Open

Those, who prefer to spend time outdoors, are sure to enjoy the beautiful Abbey Park, next to which there is another significant attraction. In 1143, Abbey of St. Mary was founded there. Till this day only a few items have managed to survive; the major part of the building is in ruins. Beautiful architectural monument is the Cathedral. High-scale structure with an original design of the facade and refined interiors … Open

The largest shopping center of the city is Highcross; there are more than a hundred different trade stands in it. The Lanes area is famous for its high-end shops and boutiques. Beaumont Leys situated in the heart of the city remains the most popular market. Large selection of fresh food, interesting souvenirs and gifts is also represented at the Indoor Market and Leicester Market. Leicester will please fans of … Open

The Maiyango restaurant serves a variety of European dishes. The menu includes original and creative dishes that visitors won’t be able to find in any other place. The wine list includes the best-known brands of the drink; visitors also have an opportunity to complement their favorite dishes with cocktails. An interesting restaurant is Le Bistrot Pierre specializing in French cuisine. Visitors are offered to … Open

Traditions and mentality of Leicester

A few years ago the main festive events were performances of fakirs, and today they are replaced with spectacular fireworks and large-scale performances. However, a lot of people gather to watch the spectacular stunts of tamers of fire. Tourists are also attracted by another national holiday, Leicester Caribbean Carnival. It has no equal in beauty and diversity of recreational activities. During the carnival, … Open

Fans of unusual sights will be interested to visit the park Wistow Maze. This is an uneasy park. It looks like a big farm, in which mazes from all known plants are equipped everywhere. Here you can walk in the mazes of sunflowers and corn. On this farm are equipped interesting playgrounds for children. For the youngest visitors, cognitive activities are held here, during which they can learn a lot of interesting … Open