Sightseeing in Koktebel - what to see. Complete travel guide 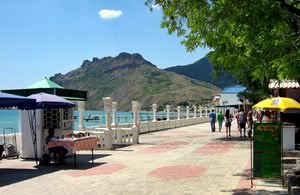 Koktebel belongs to the category of those cities whose foundation date is not known. The history of Koktebel is covered with a veil of mystery and has hardly been studied, and there are almost no archaeological monuments of its past. It is known that in the territory of the modern city, there used to be a fairly large medieval fortified settlement, which soon became a successful commercial sea port. However, the valleys of Karadag, near which Koktebel is located, have been inhabited for a long time. Here lived the Cimmerians, and then the Taurians and Scythians, as well as natives of the Bosporus, destroyed by the barbarians.
Your active city break in Koktebel. Attractions, recreation and entertainment - best places to spend your day and night here
Opportunities for active recreation in Koktebel are incredibly much. Those who do not want to rest on the beach can spend a lot of exciting excursions to charming places. Everyone can go on …

Open
In the 10th century the Pechenegs destroyed the city completely, and life in it resumed only after several centuries. After that there was a small Tatar village, and then a Bulgarian settlement. Until the end of the 19th century it was a small town through which an important road passed to Feodosia. At the beginning of the 20th century, in a picturesque and quiet city, the literary elite and other representatives of bohemia began to settle; they bought plots in the Koktebel Valley and built luxurious mansions.
Many famous people visited Koktebel, but most often the village is associated with the name of Maximilian Voloshin, the famous poet of the Silver Age. The outstanding artist and poet became the soul of Koktebel; it was he who found here the ruins of an ancient settlement. Voloshin loved this place for its pristine and wild beauty. He is buried in Koktebel, at the very top of the Kuchuk-Yenishar Mountain, which is located very near the Cape Chameleon. The poet himself wished to be buried there, and also asked that trees and flowers not be planted near his grave, as he loved Koktebel in his natural beauty. Copyright www.orangesmile.com
Cuisine of Koktebel for gourmet with top restaurants and cafe
As in many resort towns, the gastronomic life of Koktebel is mainly concentrated on its embankment. In the morning and in the afternoon you can easily have a snack or order a complex dinner. …

Open
Maximilian Voloshin did a lot for Koktebel and does, probably still, even after his death. The house where he lived became a museum, and very many people come here to see pictures of the famous poet and artist, who at one time, was visited by many outstanding personalities. Slowly but surely the village developed, and in the 30s of the last century there were already seven large holiday homes. The Great Patriotic War negatively affected the life of the village; during the war Koktebel was almost completely empty. Now Koktebel is one of the popular holiday destinations on the Crimean coast, as well as a permanent venue for a beautiful jazz festival. 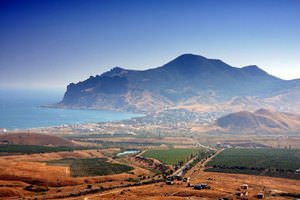 The guests of the famous resort have an opportunity to visit the Karadag Natural Reserve. Its main attraction is the Karadag Mountain Range that is nothing but a huge extinct volcano. Millions of years ago, multiple eruptions impacted the formation of the special natural landscape. Some parts of the reserve really impress with its desert lunar landscapes. Near them, you can see vast green valleys. The reserve sharply contracts with natural landscapes.
Excursion over cultural sights of Koktebel - 'must visit' points of interest
Koktebel is a fairly compact city, so it does not have a lot of attractions. The magnificent bay in the embrace of the volcano Karadag, the mountains of Uzup-Syrt and the range of Kiik …

Open
Those who want to learn more details about the features of the natural reserve should visit the Karadag Nature Museum located in the surroundings of Koktebel. In 1914, the scientific base was created in this area. Its biological artifacts are a core of the museum exposure. Now, among thousands of exhibits, you can see stuffed birds and rare animals, species of rare plants and insects, and a lot of other themed exhibits dedicated to flora and fauna of the reserve. 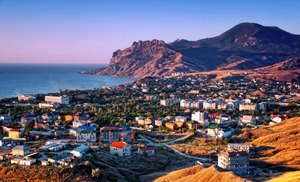 Another interesting natural object is the rock that was called Golden Gate for its unusual arched shape. The beautiful rock protrudes from the sea not far from the coast. It is more interesting to admire it in the sun. You can visit this unique attraction in the context of the excursion around the reserve. You can also take a boat trip to the rock.
Your active city break in Koktebel. Attractions, recreation and entertainment - best places to spend your day and night here
Opportunities for active recreation in Koktebel are incredibly much. Those who do not want to rest on the beach can spend a lot of exciting excursions to charming places. Everyone can go on …

Open
Koktebel is primarily known as a beach resort. The total length of its beaches is about 4 000 m. The resort attracts more tourists in June and August. Fans of water entertainments have an opportunity to visit the local waterpark that is one of the largest in the region. It occupies almost 44 000 m2. In the waterpark, there are 7 pools, over 20 slides, and a lot of interesting water attractions. There are also special recreation areas and attractions for children of different ages. In the middle of the tourist season, the waterpark is visited by over a thousand people every day. 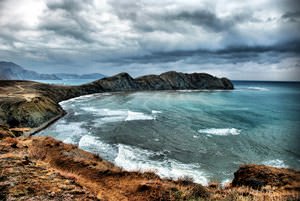 The dolphinarium where you can watch performances with different sea dwellers will impress you too. Besides dolphins, you can see here popular whales and sea bears. The dolphinarium of Koktebel has recently taken an active part in topical environmental programs.

This guide to iconic landmarks and sights of Koktebel is protected by the copyright law. You can re-publish this content with mandatory attribution: direct and active hyperlink to www.orangesmile.com.
Koktebel - guide chapters 1 2 3 4

Search touristic sites on the map of Koktebel

Sightseeing in regions nearby Koktebel

Feodosiya
In Feodosia, there are also several upscale wellness centers that will be perfect places for tourists wanting to improve their health. The enchanting old town is well-developed from a tourist point of view. When walking, travelers can see attractive restaurants, cafes, interesting gift shops and stalls where you can buy a lot of tasty sweets and house wine. In the town, there ... Open »
Sudak
Sudak will definitely impress fans of sports entertainments who can diverse their leisure in different interesting ways in addition to visiting classic beach attractions. Hand-gliding, helicopter flight, romantic cruises and plenty of interesting places for walking and scuba diving... Sudak is not inferior to big Crimean resorts in entertainments. It is just impossible to ... Open »
Alushta
For a long time, Alushta was under the rule of the Byzantines, after - the Genoese, and also the Crimean Tatars, but the most intense and interesting part of its history begins after the annexation of Crimea to the Russian Empire. At that time, the population of Alushta was about 250 people who were engaged in manual labor - cattle breeding, farming and fishing. The ... Open »
Hurzuf
Semi-ring mountains, towering 1.5 kilometers above sea level, protect Gurzuf from cold northern winds, and from the east the village is protected by Bear Mountain. On this territory in certain periods of history lived Taurians and Goths, a large ancient settlement was located here, and even a slab with an inscription in the ancient Greek language was preserved. In the 12th ... Open »
Simferopol
This city is also famous for its beautiful parks - Vorontsovsky Park, in which you will see a wonderful sight of landscape architecture the mansion of Pallas and the house of Count Vorontsov, and the urban recreation park with its wonderful atmosphere. Simferopol is famous for numerous cultural institutions located in this city. The city’s suburbs are no less interesting as ... Open »
Yalta
When admiring the panorama of the resort from a birds-eye view, you can see that there are lush green plantings literally a step away from the coast. To enjoy the soft sea and unique nature, it is not necessary to leave the resort, as everything here is within walking distance. In Yalta, there is a wide choice of boarding houses and sanatoriums, so the guests of the resort ... Open »

All about Koktebel, Ukraine - sightseeings, attractions, touristic spots, architecture, history, culture and cuisine. Prepare your trip together with OrangeSmile.com - find out the 'must see' things in Koktebel, which places to visit, which excursions to take, where the breathtaking views are waiting for you. Planning your trip with this travel guide will help your to get the most out of Koktebel in few days.