Sightseeing in Alupka - what to see. Complete travel guide 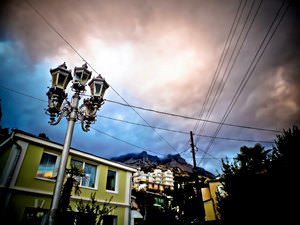 The real highlight and characteristic feature of Alupka is the rich vegetation, tangled and winding city streets, the beauty of the Vorontsov Palace and the amazing park. And yet, of course, the majestic peaks of Ai-Petri mountain, which are impossible to forget after seeing them at least once.
The history of Alupka began in 960, when the Crimea was under the rule of the Khazar Khaganate. A settlement called Alubika was founded here. These places have preserved the memory of different historical eras up to our time. On the South Coast of Crimea, scientists have discovered the ruins of Taurian burial grounds with tombs and fortresses. Over the years, the population of the southern coast has lost its relative independence. By order of the emperor of Byzantium Justinian I, “long walls” were erected on the mountain passes. The walls were supposed to stop nomads and block the access to these lands.
The former Taurian citadels were gradually strengthened, new fortresses called “Isara” were erected. The ruins of the watchtowers and Isara fortresses could be seen in the immediate vicinity of Alupka till the end of the 19th century. The very first settlement on the site of modern Alupka dates back to the VIII century BC. Copyright www.orangesmile.com
In the XIV-XV centuries, a one of the strongholds of the Genoese was located here, it was called Lupiko. After the annexation of Crimea to the Russian Empire in 1783, Alupka was given in possession to Prince Potemkin. Later, in 1823, it was taken over by Count Vorontsov, who built the legendary palace here. Nowadays, Vorontsov Palace is the main attraction of the city. 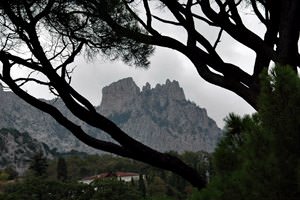 In the XX century, Alupka becomes a popular resort, at this time more than 200 private resorts are being built on its territory. It is worth noting that Maxim Gorky, Fyodor Chaliapin, Ivan Bunin, Mikhail Kotsyubinsky, Sergey Rachmaninov, Lesya Ukrainka and other famous celebrities have vacationed in Alupka. In 1938, Alupka acquired the status of a city, and in 1941, it already had 25 health resorts of various profiles, several schools, a hospital, and other institutions.
Alupka is beautiful at any time of the year, including the winter period. At any time, visitors are always welcome here. The doors of guest houses, hotels and recreation centers are open to visitors all year round. It is worth noting that the majority of tourists in the winter come here to improve their health by the re-healing air, which has a proven effect on health conditions. In winter, there are few holidaymakers in the resort, and therefore a very calm and relaxing atmosphere reigns. 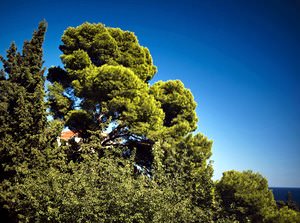 The important religious monument at the resort is the Church of Archangel Michael that started to be built in 1898. It was constructed on the ruins of the old church, which preserved some elements used for the foundation afterwards. The new church was finally built in 1903 and reconstructed not so long ago. Today, the temple attracts with its big golden domes. The church facade has remained almost unchangeable since its construction.
At the resort, there are also a lot of unique nature attractions. One of its districts bears a quite unusual name - Big and Small Chaos. This is an area where natural stone formations were found. The researchers still argue about how this area appeared. This interesting district is not so far from the Vorontsov Palace. As some researchers suppose, it was formed by the volcanic eruption. 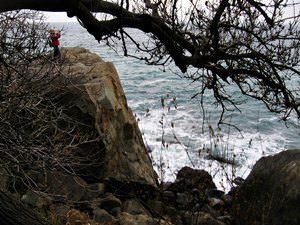 The special cultural center in the city is the Theatre of Sea Animals. The diversity of animal species, whose performances you can witness in the theatre, is really impressive. Every day, a lot of interesting events are held here. The theatre is located on the territory of the beautiful park. In it, there is also another unusual attraction, the inverted house. Everyone can visit it too. It is necessary to be very careful inside the house, as all the items of furniture are turned upside down here.
Those who prefer walking along picturesque places should certainly take tours to the waterfall on the river Uchan-su. It is located in the incredibly beautiful natural area. When moving towards to the waterfall, you can admire fabulous landscapes and see rare plants and typical dwellers of this place. Experienced tourists note that it is more interesting to admire the waterfall in spring when it becomes very swift. 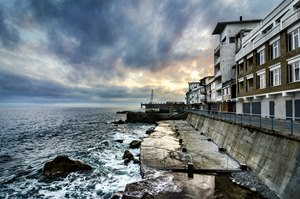 The main value of the historical resort is the Massandara winery that you can visit too. The visitors of the winery have an opportunity to watch how legendary wine is produced and to see the halls where wine is vatted. On its territory, there is a tasting room where you can taste the most popular wine. Here, you can also drop in a specialized shop.
This guide to iconic landmarks and sights of Alupka is protected by the copyright law. You can re-publish this content with mandatory attribution: direct and active hyperlink to www.orangesmile.com.

City tours, excursions and tickets in Alupka and surroundings

Survived castles around Alupka
♥   Castle 'Swallow’s Nest Castle' , 6.4 km from the center. On the map

Sights around Alupka from our guide 'Extreme places on Earth'

Distance from Alupka center - 37.1 km.
The museum is quite large, its visitors have a chance to look into the preserved old dry dock - a place where the submarines were repaired a few decades ago. The arsenal of the military base has also been preserved and today represents the largest exposition of the museum. At present the military-historical complex is being renovated. It is planned to expand the size of the museum soon and to complement the collection with new unique exhibits. The military base is open to visitors all year round. … Read further

Distance from Alupka center - 27.1 km.
Tourists visit this place for the sole purpose - to admire the ruins of majestic palaces and ancient Christian churches, and stroll through the narrow survived streets of the city. Not long ago, Crimean monks took the initiative to restore the ancient Christian monastery and the monastery church at Mangup Kale plateau. A few years later, the ambitious project was put into action. Today there is a functioning monastery of the Annunciation, where only one person, the abbot Iakinth, resides. … Read further

Search touristic sites on the map of Alupka

Sightseeing in regions nearby Alupka

Simeiz
As for the incredible nature, the favorable climate at the resort should be noted. To improve your health, it is not necessary to visit wellness centers here. It is enough to spend more time by the sea and in the open air. The atmosphere of the resort has a positive effect on the body. For those who want to undergo a set of recovery procedures should choose one of the ... Open »
Koreiz
One of the first landlords’ residences on the territory of the village is a mansion built in the 20s of the 19th century by Duchess A. A. Golitsyna. After some time, duke Yusupov bought this mansion. In 1904, the palace in the modern style was built under the project of Yalta architect N. P. Krasnov. When the Yalta Conference was held in 1945, exactly the Yusupov Palace ... Open »
Livadiya
In 1834, Livadia was bought by a Polish tycoon, count Lev Pototsky. At the end of the 30s, he put up the vineyard here. In 1860, his square was almost 19 hectares. Wine has started being produced since that time. Also, the big wine cellar for storing wines was built. Over two thousand buckets and four thousand buckets of wine were produced in 1848 and 1853 respectively. At that ... Open »
Yalta
Remarkably, almost all the beaches of Yalta were paid until 2010. Now, the entrance to them is absolutely free. There can be extra charge only for beach equipment. With it, the biggest part of the coast is distinguished by very good equipment. In 2012, a range of Yalta beaches earned honorary awards for high environmental indicators, which made the resort more attractive. ... Open »
Hurzuf
The very first aristocrat seriously interested in these lands was Governor General Richelieu, who bought a piece of land and built a house with office buildings on it. After 10 years, it was bought by Governor General Vorontsov, but Gurzuf became a real benefactor of a large industrialist, Gubonin. It was he who revived the city, built several hotels, restaurants, electricity ... Open »
Alushta
In the time of Tsarist Russia, many noblemen built mansions here. Wealthy people, representatives of nobility and bohemians preferred to come to rest in Alushta. The public resort of Alushta already was in the Soviet era; it was during this period that most sanatoriums, boarding houses and health resorts were built here. Here ordinary people could rest, and a unique ... Open »

All about Alupka, Ukraine - sightseeings, attractions, touristic spots, architecture, history, culture and cuisine. Prepare your trip together with OrangeSmile.com - find out the 'must see' things in Alupka, which places to visit, which excursions to take, where the breathtaking views are waiting for you. Planning your trip with this travel guide will help your to get the most out of Alupka in few days.