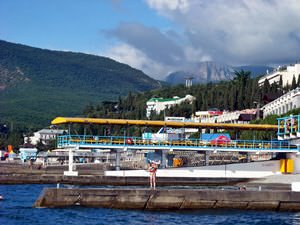 Alushta is one of the most modern cities of the Crimean peninsula, which managed to preserve the unique charm of the past. The city has a lot of interesting features, which must be noted by attentive travelers. Narrow streets, through which public transport hardly advances, do not go unnoticed. By the way, drive here is at a frenzied speed, even in very winding streets, and so a ride on a local taxi is a separate attraction. Those who go to Alushta by private car should be especially careful, local drivers "do not forgive" inexperienced tourists for their carelessness.
Cuisine of Alushta for gourmet with top restaurants and cafe
Alushta is a popular resort town with a lot of bars and restaurants. There are cookery institutions of different directions and price level, so everyone can choose a suitable place for rest. …

Open
As for the character of the locals, they are quite sympathetic and hospitable. Before asking for help from the citizens, you should definitely say hello; during communication, do not forget about the elementary courtesy. Speaking about the culture of locals, it is worth mentioning the traditions of wine making, which totals more than one hundred years. Here, wine is treated very respectfully. Many locals themselves know how to cook it perfectly, and it turns out they are no worse than the factory ones. The tourists have a great value for home wine, but it should be chosen attentively and carefully.
You can fully experience the unique atmosphere of the national color during a walk through one of the city's markets. There is always a very lively atmosphere; voices are heard everywhere and mountains (literally) of fresh vegetables and fruits are visible. It is worth noting that the indigenous people prefer to go shopping in markets, although the choice of supermarkets in the resort is also very large. For many townspeople, going to the market has become a good tradition. The attitude towards the sea among the indigenous people, on the contrary, is rather restrained. Not all regularly rest on the beach; this way of organizing leisure for locals is more an exception than a usual event. The atmosphere of the city is constantly changing, but it manages to maintain its national attractiveness and unique charm. Copyright www.orangesmile.com

This guide to traditions and festivals in Alushta is protected by the copyright law. You can re-publish this content with mandatory attribution: direct and active hyperlink to www.orangesmile.com.
Alushta - guide chapters 1 2 3 4 5 6

Cathedrals and basilicas near Alushta
♥   Cathedral, Simferopol, 40.6 km from the center. On the map

Unique landmarks in Alushta and around

The Temple Of Donators 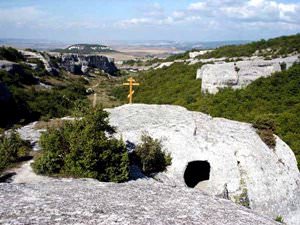 Distance from Alushta center - 54.9 km.
According to one version, the temple was founded by a wealthy ducal family, whose name remains unknown. Currently, there is the only pathway that originates in the valley and gradually rises to the entrance of the temple. Despite the fact that the shrine can be seen from afar, it’s not easy to find the path leading to it among the dense thickets of trees and a huge number of scarps. Beautiful frescoes and inaccessibility are not the only distinguishing features of the Temple of Donators. Since ancient times, locals believed in miraculous power of these places, which was confirmed by amazing stories of people who have visited the shrine. … Read further 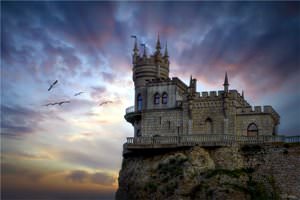 Distance from Alushta center - 34.8 km.
The castle with the romantic name 'Schwalbennest' is located in one of the most picturesque districts of Crimea, not far from Gaspra town. One of the main characteristics of the castle is its location. Swallow's Nest was built on the summit of Avrorina Mountain, whose height above the sea forms 40 meters. The first wooden castle on this site was built at the end of the 19th century, after the close of the Russian-Turkish war. … Read further

Colors of Alushta in photos

Traditions and festivals in cities around Alushta

Anapa
Locals have long been accustomed to the huge number of travelers who stay at the resort all year round. The attitude of the indigenous population to tourists is restrained and quite benevolent; the key to successful communication with locals will be elementary courtesy. For those who do not imagine rest without bright parties and discos, it is worth considering that nightlife ... Open »
Odessa
The holiday will be as well of great interest for music fans as the city day in Odessa is accompanied with various music events including as classic music concerts so grand rock festivals. Considering music traditions and events tourists should necessarily visit the Odessa jazz carnival which is held in the end of September. Famous music bands and amateur musicians are engaged ... Open »
Dnepropetrovsk
Family life is accompanied by interesting rites and rituals. Travelers who are lucky enough to attend a local wedding will have the opportunity to see colorful dance and music performances. At every wedding there are certainly funny games, entertainment and, of course, a rich celebratory table. The birth of a child is the most important event for every married couple. The ... Open »
Donetsk
The beginning of July marks the start of one more notable event in the city of a million roses. It is the time for Lava Fest, one of the best festivals in the region that is dedicated to the hip-hop culture. Among headliners of the festival, there are always famous bands and performers. The event takes place on Metalurh Stadium. The main aim of the festival is to entertain ... Open »
Constanta
Old blocks, iron traffic lights at busy intersections, children's playgrounds built decades ago - it seems that the city is frozen in the past and continues to live the same measured life. It must be said that all the old urban elements are maintained in working order; even iron children’s slides are regularly painted in bright colors. Another interesting Constanta's ... Open »
Adler
In the market there is one of the most popular shops of the resort - "Cuban Wines", here you can buy the best varieties of local wines, as well as interesting tinctures and high-quality cognac. For travelers who want to take a walk in the colorful local market, it is necessary to take into account several important features. Passing along the rows, calls of local traders to ... Open »

Cityguide on traditions, mentality and lifestyle of people in Alushta. Learn the best periods to visit Alushta to discover its soul - authentic festivals, events and celebrations. We will also reveal the interesting habits, attitude towards the world and to tourists in Alushta.