Sightseeing in Sevastopol - what to see. Complete travel guide

The hero city with a rich history started welcoming tourists a few years ago. Sevastopol was founded as the main base of the Russian fleet in 1783. The city has managed to maintain such an important status to this day. In addition, Sevastopol is an attractive tourist center today. The city attracts many travelers with plenty of attractions and incredibly beautiful beaches.
On the territory of Sevastopol, there are a lot of preserved architectural monuments, some of which are aged over 200 years. Here, you can see fascinating mansions built in the 18th-19th centuries, walk along lovely winding streets, and admire the beauty of the nature. The city was significantly damaged in the period of the Great Patriotic War. The biggest part of its invaluable historical heritage was irrevocably lost. Due to the locals’ effort, the city was quickly restored after the war. The citizens still remember about the great deeds of the defenders of Sevastopol.
Sevastopol has long been the most visited resort city of Crimea. Each year, about 10 million people vacation here. From year to year, the tourist infrastructure of the modern city is being improved. There are all the conditions for interesting pastime and comfortable recreation of the guests of Sevastopol. Most of the tourists are fans of beach recreation. Besides, Sevastopol is very popular with fans of excursion tourism. Copyright www.orangesmile.com
In the city and its immediate surroundings, there are hundreds of interesting places to explore. There are not only historic constructions and museums, but also unique nature attractions. There are over 2 000 monuments dedicated to military and labor deeds of the locals. 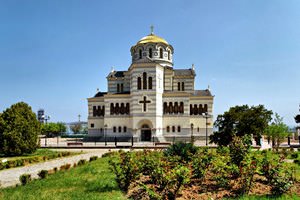 Sevastopol is located in the south-western part of the Crimean peninsula. One of the main distinctive features of this land is plenty of wonderful secluded bays. There are over 30 bays along the coastline. Such an amazing choice of leisure areas will definitely impress those travelers who prefer to spend their time in secluded places. The city is also not without noisy entertainment venues. There are excellent leisure centers for the whole family, lively disco and night clubs, sports centers, and a lot of attractive gastronomic places.
In the immediate surroundings of Sevastopol, there are several important archeological districts. Those who like walking along historical places have an opportunity to visit the ruins of the old city called Chersonesus Taurica. Some researches suppose that this old Greek town was founded in the 5th century BC and had existed for over 1.5 thousand years. Consequently, the city was completely destroyed by nomadic tribes. Its ruins were found only in the 19th century. Now, most of the old constructions are restored in the archeological area. 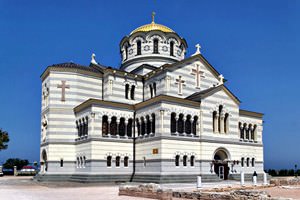 The interesting monument in antique style is the Tower of the Winds built in the 19th century. Originally, the tower was built for the local library but it was destroyed in a large fire in 1955. The tower decorated with interesting bas-reliefs has been survived to this day and now is one of the main values of the city.
The beautiful historic building of the late 19th century is occupied by the Sevastopol Art Museum. It houses the unique collection of sculptures, paintings, and drawings of world-famous masters. Here, you can see works of great masters of Flemish Painting School and of famous Renaissance artists. The museum presents the exhibits of different periods. Some of them are aged over 300 years. 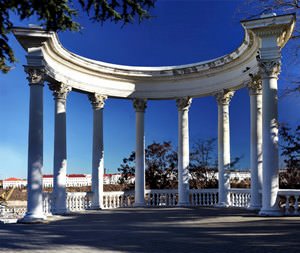 The unique religious monument here is Inkerman Cave Monastery located in the immediate surroundings of the city. The exact date of its construction is unknown. The first written references to it date back to the 8th century. In the middle of the 19th century, the monastery fell into decline and was reconstructed not so long ago. The historic building has been recently reconstructed but it is located in the picturesque natural area.
In the territory of the city, there is the Cathedral of Protecting Veil of the Mother of God that is the most religious construction in Sevastopol. It was built in the 19th-20th century but was closed after the Revolution in 1917. It gained its religious status back in the period of the Great Patriotic War. At that time, the building was partially destroyed. It started to be reconstructed in 1947 and then served as a gym. Masses were resumed here only in 1994.
This guide to iconic landmarks and sights of Sevastopol is protected by the copyright law. You can re-publish this content with mandatory attribution: direct and active hyperlink to www.orangesmile.com.

City tours, excursions and tickets in Sevastopol and surroundings

Survived castles around Sevastopol
♥   Castle 'Mangup' , 21.7 km from the center. On the map

Sights around Sevastopol from our guide 'Extreme places on Earth'

Distance from Sevastopol center - 21.2 km.
Tourists visit this place for the sole purpose - to admire the ruins of majestic palaces and ancient Christian churches, and stroll through the narrow survived streets of the city. Not long ago, Crimean monks took the initiative to restore the ancient Christian monastery and the monastery church at Mangup Kale plateau. A few years later, the ambitious project was put into action. Today there is a functioning monastery of the Annunciation, where only one person, the abbot Iakinth, resides. … Read further 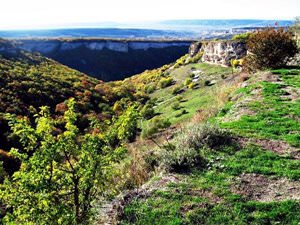 Distance from Sevastopol center - 17.3 km.
Amazing tours along the gorge are conducted for pilgrims and tourists. The length of the landmark is about 2 km. Besides the monastery, guests of these picturesque places will be able to see the wonderful mountain scenery, look at the once inhabited caves and see the remains of the rock art. Currently, the Assumption Monastery goes through another large-scale reconstruction. The renovated building looks incredibly impressive. There are lots of visitors in the monastery. All travelers can experience its unique relics and special historic atmosphere. … Read further

Search touristic sites on the map of Sevastopol

Sightseeing in regions nearby Sevastopol

Simeiz
Simeiz offers not only wonderful nature and upscale wellness centers, but also rich cultural heritage, the acquaintance with which will certainly diverse your recreation. Most of the excursion objects are unique nature attractions but fans of walking along historical places will not be bored too. Several interesting attractions are located in the territory of the resort town. ... Open »
Alupka
Alupka is beautiful at any time of the year, including the winter period. At any time, visitors are always welcome here. The doors of guest houses, hotels and recreation centers are open to visitors all year round. It is worth noting that the majority of tourists in the winter come here to improve their health by the re-healing air, which has a proven effect on health ... Open »
Koreiz
In the late 19th century, Koreiz became a peculiar capital of surrounding cities, towns, villages and villa quarters. In 1914, there was a telegraph, a telephone station, a post office, pharmacy, a coffee house, wine shops, and other venues characterizing big cities. Since 1785, G. A. Potemkin had started actively encouraging the development of horticulture and viniculture in ... Open »
Livadiya
The ruins of the feudal castle found on Mount Hachla Kayasy that date back to the 10th-11th centuries have survived to this day. In the 18th century, there was a small Greek settlement at the site of present Livadia. It was called Ay Yan after St. John. Upon the order of the king, its residents moved to the Azov Governorate in the second half of the 18th century. After Crimea ... Open »
Yalta
When admiring the panorama of the resort from a birds-eye view, you can see that there are lush green plantings literally a step away from the coast. To enjoy the soft sea and unique nature, it is not necessary to leave the resort, as everything here is within walking distance. In Yalta, there is a wide choice of boarding houses and sanatoriums, so the guests of the resort ... Open »
Saky
Besides invaluable mud deposits on the territory of the resort, there are healing mineral springs and salt Saki Lake. It should be noted that the lake is a true local attraction associated with a lot of ancient legends. Besides upscale recreation houses and wellness centers, the resort is famous for its attractions, the most famous of which is the Resort Park. The town will ... Open »

All about Sevastopol, Ukraine - sightseeings, attractions, touristic spots, architecture, history, culture and cuisine. Prepare your trip together with OrangeSmile.com - find out the 'must see' things in Sevastopol, which places to visit, which excursions to take, where the breathtaking views are waiting for you. Planning your trip with this travel guide will help your to get the most out of Sevastopol in few days.