Sightseeing in Koreiz - what to see. Complete travel guide 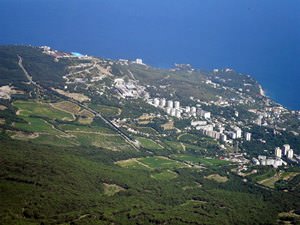 Koreiz is a wonderful resort village located 12 km from enchanting Yalta. The boundaries of Koreiz and Gaspra have long mingled and only the indigenous people can say where one village ends and another starts. In Russian literature, this picturesque Crimean village was first mentioned by academician P. S. Pallas. He traveled to these beautiful places in 1793-1794. A little later, Koreiz was visited by academician P. I. Sumarokov. On the basis of information from the Lists of Populated Areas of the Russian Empire, there were about 25 palaces in Koreiz in 1865. They were inhabited by 130 people. Also, there was a working mosque and a post office with two yards and 15 residents in the village.
In the late 19th century, Koreiz became a peculiar capital of surrounding cities, towns, villages and villa quarters. In 1914, there was a telegraph, a telephone station, a post office, pharmacy, a coffee house, wine shops, and other venues characterizing big cities. Since 1785, G. A. Potemkin had started actively encouraging the development of horticulture and viniculture in Crimea. He invited specialists and imported the best grapes. After the Crimean War, the southern coast was very attractive for landlords, noble people, and high royal officials.
The village was being built up by different hotels, restaurants, private guest houses, and gambling houses that attracted adherents of beautiful leisure to these places. The construction involved legendary architects and engineers. Koreiz has turned into a luxurious aristocratic resort within just a few years. Copyright www.orangesmile.com
One of the first landlords’ residences on the territory of the village is a mansion built in the 20s of the 19th century by Duchess A. A. Golitsyna. After some time, duke Yusupov bought this mansion. In 1904, the palace in the modern style was built under the project of Yalta architect N. P. Krasnov. When the Yalta Conference was held in 1945, exactly the Yusupov Palace accommodated the entire Soviet delegation. Modern Koreiz seems very attractive to fans of ecotourism and those who prefer calm and peaceful resorts. This enchanting village with its unique history and atmosphere where you can enjoy the harmony of the world around you, walk along picturesque places, and taste the best Crimean wines. 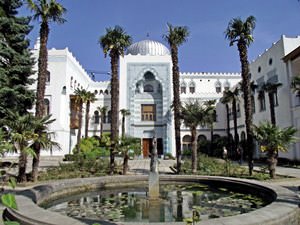 Despite its tiny area, the resort will impress fans of sightseeing tours with multiple attractions. The most beautiful architectural monument is the Dulber Palace built for the royal family in 1897. When it was finished, Peter Nikolayevich Romanov, the uncle of Emperor Nicholas II, lived here. After the Revolution, the sanatorium was opened here. It is still working now. The landscape garden surrounding the palace is very popular too.
In the picturesque park, there is the Kichkine Palace. It was built in 1913. The palace belonged to Dmitriy Konstantinovich Romanov. The historical monument was built in the Eastern style and decorated with sophisticated carved towers and domes. Its facade is decorated with arches and patterns. Several years ago, the hotel was opened in this historical palace. Today, everyone can spend several days in this picturesque atmosphere of the past. 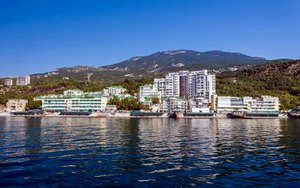 Nature admirers also like walking along submontane areas of Ai-Petri. The mountain is distinguished by many caves on its slopes. There are over 300 caves here. Only some of them are open for visitors. The most interesting cave is called Trehglazka. Its unique feature is its microclimate. The air temperature here is quite low during the year. The visitors have an opportunity to see a big snowdrift and cave lake covered with ice. The ice in the cave doesn’t melt even in hot weather.
If you don’t want to go far from the resort to admire incredible landscapes, you should visit the Chair Park. It is very beautiful and presents the rich collection of rare tropical plants. Here, you can see different types of cypresses. There is also a big rose garden in the park. The Chair Park is a historic site. It was founded in the late 19th century. Today, you can see here trees aged over a hundred years. It will be also very interesting for fans of beach recreation to visit Koreiz. Almost all local hotels and guesthouses are located in the well-equipped coastal area.
This guide to iconic landmarks and sights of Koreiz is protected by the copyright law. You can re-publish this content with mandatory attribution: direct and active hyperlink to www.orangesmile.com.

City tours, excursions and tickets in Koreiz and surroundings

Survived castles around Koreiz
♥   Castle 'Swallow’s Nest Castle' , 3.6 km from the center. On the map

Sights around Koreiz from our guide 'Extreme places on Earth'

Distance from Koreiz center - 39.3 km.
The museum is quite large, its visitors have a chance to look into the preserved old dry dock - a place where the submarines were repaired a few decades ago. The arsenal of the military base has also been preserved and today represents the largest exposition of the museum. At present the military-historical complex is being renovated. It is planned to expand the size of the museum soon and to complement the collection with new unique exhibits. The military base is open to visitors all year round. … Read further

Distance from Koreiz center - 28 km.
Tourists visit this place for the sole purpose - to admire the ruins of majestic palaces and ancient Christian churches, and stroll through the narrow survived streets of the city. Not long ago, Crimean monks took the initiative to restore the ancient Christian monastery and the monastery church at Mangup Kale plateau. A few years later, the ambitious project was put into action. Today there is a functioning monastery of the Annunciation, where only one person, the abbot Iakinth, resides. … Read further

Search touristic sites on the map of Koreiz

Sightseeing in regions nearby Koreiz

Alupka
Alupka is beautiful at any time of the year, including the winter period. At any time, visitors are always welcome here. The doors of guest houses, hotels and recreation centers are open to visitors all year round. It is worth noting that the majority of tourists in the winter come here to improve their health by the re-healing air, which has a proven effect on health ... Open »
Simeiz
Simeiz offers not only wonderful nature and upscale wellness centers, but also rich cultural heritage, the acquaintance with which will certainly diverse your recreation. Most of the excursion objects are unique nature attractions but fans of walking along historical places will not be bored too. Several interesting attractions are located in the territory of the resort town. ... Open »
Livadiya
The ruins of the feudal castle found on Mount Hachla Kayasy that date back to the 10th-11th centuries have survived to this day. In the 18th century, there was a small Greek settlement at the site of present Livadia. It was called Ay Yan after St. John. Upon the order of the king, its residents moved to the Azov Governorate in the second half of the 18th century. After Crimea ... Open »
Yalta
In Yalta, there is a wide choice of boarding houses and sanatoriums, so the guests of the resort have an excellent opportunity to have a wonderful vacation with a profit to their health. Yalta is unique in offering wonderful conditions for recreation of fans of different types of tourism. Eco, health, beach, food, sports and extreme tourism  people with different interests ... Open »
Hurzuf
The resort is famous for its unique nature; in the heart of Gurzuf there is the Genoese rock and the Chaliapin rock, and in the bay waters the mysterious cliffs of Adalara rise. The first settlements on the territory of the modern city appeared more than 40 thousand years ago. On the Genoese rock, the ruins of the fortress of Gorzuvita, which was built during the reign of the ... Open »
Alushta
In the 6th century AD, the area where Alushta is now located, like the entire Southern Coast of Crimea, was under the rule of the mighty Byzantine Empire - the great heiress of Ancient Rome. It was at that time that the stone fortress Aluston was built near the sea shore, which was supposed to protect the land from sea robbers. In modern Alushta you can see the ruins of the ... Open »

All about Koreiz, Ukraine - sightseeings, attractions, touristic spots, architecture, history, culture and cuisine. Prepare your trip together with OrangeSmile.com - find out the 'must see' things in Koreiz, which places to visit, which excursions to take, where the breathtaking views are waiting for you. Planning your trip with this travel guide will help your to get the most out of Koreiz in few days.