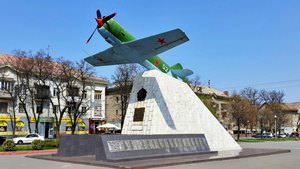 Zaporizhia is a large industrial city, one of the most important industrial centers of Ukraine. It does not at all resemble those industrial cities that were actively rebuilt during the Soviet period. Many shady avenues are broken on the banks of the Dnieper, and all the streets of the city, not to mention the parks and squares, are simply buried in the abundance of greenery. Right after DneproGES there is a small area, which locals call Sotsgorod. This is the very realm, where the architectural style, called the Stalinist Empire, rules undividedly. The houses here are all majestic and high, with columns, fountains and porticos, as well as large courtyards.
Cuisine of Zaporozhye for gourmet with top restaurants and cafe
Modern Zaporizhia is a city of factories and metallurgists; it is the presence of large industrial enterprises that determines its appearance. In the central area of the city are modern …

Open
An important landmark of the city, which will be appreciated by lovers of architecture, is the Glinka concert hall, which simply amazes with its strict, majestic and calm architecture. The real adornment of the city is the "Zaporizhia Ukrainian Music and Drama Theater" named after Magar, whose unusual facade with figures of collective farmers and workers is something pompous, but at the same time very harmonious.
Anyone who did not see the Dnieper was not in Zaporizhia. Its graceful horseshoe-like view is good in any foreshortening, not every city of Ukraine can boast of such attractive and interesting industrial attractions. On both sides of the horseshoe-like view there are two remarkable parks: on the right bank there is the "Energetikov Park" with its ancient poplars and spreading lindens and on the left bank the Metallurgists' Park, very quiet, shady and calm. Copyright www.orangesmile.com
Your active city break in Zaporozhye. Attractions, recreation and entertainment - best places to spend your day and night here
As in any large city, in Zaporizhia are accessible the most different centers of leisure and entertainment. A lot of options for active recreation in Zaporizhia are connected with Khortitsa. …

Open
In the city there is another important natural monument, from which originates Zaporizhia - the island of Khortytsia - national heritage of all of Ukraine. The island is attractive not only for its Cossack past. It is truly a unique nature reserve, which is not called the pearl of the Dnieper in vain. On the island in miniature are all types of landscapes, which are typical for Ukraine. Here there are steppe, forest-steppe, and floodplains, meadows, and forest, and in the northern part of the island there are even rocks. The vegetable world of Khortytsia is incredibly diverse, and the entire southern part of the island is a protected area. The island is connected with the city by one of the most beautiful bridges in Europe – "Preobrazhensky". The historical past of Zaporizhia is rich and multifaceted, even large-scale factories and industrial centers could not eclipse its monuments.

This guide to cultural sights Zaporozhye is protected by the copyright law. You can re-publish this content with mandatory attribution: direct and active hyperlink to www.orangesmile.com.
Zaporozhye - guide chapters 1 2 3 4

The Olesko Castle is located in the Lviv region. In this 14th-century building that stands on a hill, once lived the great polish king John III Sobieski. In the 19th century, it was damaged by an earthquake, after which it was restored. At the moment there is an art museum in the castle with hundreds of wonderful exhibits from the 10th to 18th centuries: paintings, decorations and sculptures. Visitors can find ancient statues in the garden. In Poltava there is a snow-white monument-colonnade called the Rotunda of Peoples Friendship or the White Gazebo. It was opened in 1909, built in memory of the Battle of Poltava in 1709. The columns look like a horseshoe shape. This is a kind of tribute to the legend, according to which a local resident shod Peter the Great’s horse, which decided the outcome of the battle. … Open

Photogallery of cultural heritage of Zaporozhye

Excursions over cultural sights of neighbours of Zaporozhye

Dnepropetrovsk
The most interesting cultural institution of Dnipropetrovsk is the Historical Museum. It was founded in 1849 and was called the Museum of Antiquities. An invaluable collection of historical artifacts was repeatedly transported from one building to another and since 1903 it has been located in a beautiful palace. Recently a new building was added to the historic building, ... Open »
Donetsk
Guests of the city simply cannot leave Donetsk until they visit the Opera Theater that is open in a gorgeous building that dates back to the middle of the 20th century. The repertoire of the theater includes plays that are not available in any other theater of the country. It would also be a mistake not to mention Central Scherbakov Park of Culture and Leisure. It is ... Open »
Kharkov
The first church on the site of the cathedral had been founded back in 1655; it has been repeatedly destroyed and rebuilt completely. The Cathedral has gained its name only in the mid-19th century. Several priceless religious relics are stored there. Among other religious objects Basil's Cathedral and Cathedral of the Assumption should be mentioned; the latter has being ... Open »
Kerch
Kerch museums are also quite interesting; their collections include many unique exhibits. Very interesting is the exposition from the Imperal Mound, excavations of the ancient Greet cities of Ilurat, Tiriaka and Nymphaeus, some excavations from Mount Mithridates and the crypt of the goddess Demeter with truly unique frescoes. In the Historical and Archeological Museum, there ... Open »
Koktebel
Koktebel is a fairly compact city, so it does not have a lot of attractions. The magnificent bay in the embrace of the volcano Karadag, the mountains of Uzup-Syrt and the range of Kiik Atlama are the most important symbols of the resort city and priceless natural places of interest. Resting in Koktebel, it is necessary to visit the house of Maximilian Voloshin, in which he ... Open »
Yevpatoriya
Yevpatoria is a city of contrasts, which never ceases to amaze guests with its irresistible modern appearance and amazing historical atmosphere. It impresses with its elegant medieval architecture and modernity. Religious tolerance and morals inherent in locals never differ in a mild character. Those who are going to devote rest to the study of historical monuments in ... Open »

Culture guide to Zaporozhye. Which fascinating sights to visit once you are in Zaporozhye: temples, churches, museums, theaters and castles. Recommendations (with addresses, phone numbers and links) on the places 'must visit' in Zaporozhye. Plan your own city excursion by using this page info!