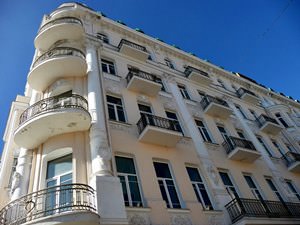 First and foremost, in Vinnitsa you need to look at the Arch in the Central Park of Culture and Leisure named after Gorky, as well as a fire tower located in the park named after Kozitsky. These historical memorials are considered a signature of the city. In Vinnitsa, a huge number of museums have been opened, especially the Pirogov Manor-Estate Museum, A. Brusilov's House-Museum and the House-Museum of the legendary writer Kotsyubinsky. All of them, as invaluable exhibits, represent belongings of outstanding citizens and tell visitors about their achievements.
Advices to travellers: what you should know while being in Vinnytsya
1. Travelers planning a rich excursion program should definitely go to the Southern Bug and visit the Pirogov Manor-Estate, which is considered one of the most interesting sights of Ukraine. …

Open
In Vinnitsa several ancient religious buildings, which belong to the XVII-XVIII centuries, were miraculously preserved. In the center of the city is the Holy Transfiguration Cathedral, one of the most beautiful architectural structures of Vinnitsa. For those who are interested in the architectural traditions of the past, it will be interesting to see the Jesuit Monastery, located nearby. The Church of the Blessed Virgin Mary of Angels, built in the middle of the 18th century, deserves special attention. In 1595 in the city, the church of St. Florian, which surprises with its exquisite beauty and unique design, was built.
Among the old buildings that survived during the Great Patriotic War, are the Grocholski manor which is a remarkable monument of the 18th century, and the historic "Savoy" Hotel, which was built in 1912. The architectural monument of the later period is the house of Captain Chetkov. Its construction took place at the beginning of the twentieth century. Also worth seeing are a complex of buildings and a huge park of the hospital named after academician A. Yushchenko; this is a vivid architectural monument of the late 19th century. Copyright www.orangesmile.com
Guide to Vinnytsya sightseeing - things to see and to visit
Vinnitsa acquired the status of a large-scale modern city only in the 30s of the last century. Now the territory of the city and its immediate vicinity is 4.5% of the total area of …

Open
In Vinnitsa the old Jewish quarter, located not far from the present city center, has been preserved unchanged. Walking along its attractive streets will become a real journey into the past. Here is located the Shargorod synagogue - one of the most beautiful architectural monuments of the Jewish community. In the early XX century it was closed, and the building requisitioned by the authorities. Another unique attraction is the fountain "Roshen" - it is the largest light and music fountain in the world, which is built on an open reservoir. There are hundreds of interesting places to visit in the city, so lovers of excursions and walks in historical areas among many cities in the country, are increasingly choosing it Vinnitsa.

This guide to cultural sights Vinnytsya is protected by the copyright law. You can re-publish this content with mandatory attribution: direct and active hyperlink to www.orangesmile.com.
Vinnytsya - guide chapters 1 2 3 4 5 6

Photogallery of cultural heritage of Vinnytsya

Excursions over cultural sights of neighbours of Vinnytsya

Kiev
An unusual sight is the Pharmacy Museum, which first welcomed its visitors in 1986. Its collection includes a variety of exhibits related to the pharmacy business, from pharmaceutical instruments and bottles to crabs and snakes preserved in alcohol. The most famous monument of defensive architecture is the Golden Gate, which had served as the main entrance to the city until ... Open »
Chisinau
The most interesting place for visitors is historic district, as all major attractions and sightseeing objects are here. Chisinau’s important symbol is the Organ Hall located next to the largest and most beautiful square of the city. Great National Assembly Square has been completely renovated recently, and today it is the site of all major public events and holidays. At the ... Open »
Lviv
The best part of city sights is concentrated in the central district of the city. Rambling is the best way for tourists to explore the historic area of the city of Lvov. Tourists should better start sightseeing from the railway station. The ancient building with its delicate arch covering is of greatest majesty and beauty. The architectural landmark is better viewed from the ... Open »
Odessa
Odessa offers its guests several dozens of museums for exploration. Each of the museums offers unique collections of showpieces. One of the most visited museums is the Odessa Archeological Museum, the Wax Museum is a perfect destination for a family visit. Pictorial art admirers will love the Museum of Western and Eastern Art and those tourists wishing to get a deeper insight ... Open »
Gomel
Gomel is a very charming Belarusian city, full of unspeakable charm. Many visitors of the city prefer to stroll through its picturesque streets in the evening, because in the light of the lamps Gomel looks simply unique. The main historical landmark of the city with a centuries-old history is the Gomel Palace and Park Ensemble. The central facility of the ensemble is the ... Open »
Brasov
Brasov and its surroundings feature a lot of interesting sights, ancient churches, castles and unique natural objects that do not cease to attract travelers with their beauty and uniqueness. Make a half an hour ride from the city and you will reach the famous Bran Castle, which was built in the 15th century. The architectural complex has preserved in a great condition till our ... Open »

Culture guide to Vinnytsya. Which fascinating sights to visit once you are in Vinnytsya: temples, churches, museums, theaters and castles. Recommendations (with addresses, phone numbers and links) on the places 'must visit' in Vinnytsya. Plan your own city excursion by using this page info!