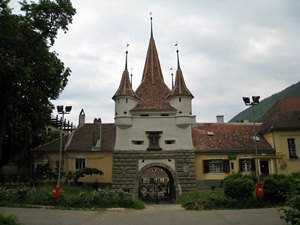 Brasov and its surroundings feature a lot of interesting sights, ancient churches, castles and unique natural objects that do not cease to attract travelers with their beauty and uniqueness. Make a half an hour ride from the city and you will reach the famous Bran Castle, which was built in the 15th century. The architectural complex has preserved in a great condition till our days. Now all tourists are cordially welcome to take a walk in mazes of the medieval castle. You can easily get lost in numerous rooms and corridors of the castle, so all excursions are held under a strict guidance of conductors. There is an ancient well that has survived in the courtyard of the castle. According to an ancient legend, the well has once served as an entrance to the underground labyrinth.
Top places to stay in Brasov - most luxurious hotels
Brasov is not deprived of the variety of fashionable hotels, and Hotel Aro Palace is one of the most prestigious in the city. This modern spectacular hotel located just a few steps away from …

Open
Don’t forget to visit Catherine Gates - the most striking medieval monument of the city. The gates are a part of fortifications that surrounded the old city. The gates were built in 1559; they are decorated with graceful towers with high spiers. The center of the gates is decorated with a magnificent ancient coat of arms of Brasov. Strada Sforii is one more interesting attraction of the city. For a long time the street was considered the narrowest street in Europe. Its width varies from 111 to 135 centimeters and the length of the street is about 80 meters. According to historical data, the street was built in the early 16th century and for a long time it was serving as a corridor for firefighters. Ordinary citizens were forbidden to walk on it. Today Strada Sforii is known as one of the most important sights of Brasov. The street was completely restored in 2003.
Among the religious sites of the city we simply cannot fail to mention St. Nicholas Cathedral, which is located in the quarter of Schei. The first church here was erected in the late 13th century. Later it was completely rebuilt in the late 15th century, and the next large-scale reconstruction took place in the 18th century under the leadership of Russian Empress Elizabeth. The walls of the church are decorated with artful painting, and its inner halls are full of ancient jewelry and religious artifacts. You will also find several ancient frescoes that have preserved in the cathedral. Copyright www.orangesmile.com
Old hotels keeping the history of Brasov
Brasov is a real treasure trove of amazing historic hotels featuring not only special designs but also the unique atmosphere. In the heart of the historic district is comfortable Casa Wagner …

Open
Black Church is a no less mysterious object of excursions. You will surely hear many interesting legends associated with it. The construction of the church was started in the second half of the 14th century. According to one legend, a boy was buried in the walls of the church. This is the reason for the name of the church. Among numerous sights of the city we should definitely mention a huge number of museums and art galleries, which contain priceless collections of art and historical artifacts. 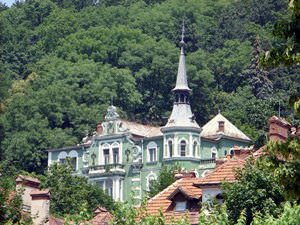 Piata Sfatului is a great place to conduct a walk around the city. Here you will find some very impressive attractions like Casa Sfatului, Cerkiew Zaśnięcia, and around the square, there are shops and restaurants, and everything fits perfectly into the overall picture. Casa Sfatului was previously a watchtower. It was constructed in the year 1420, in order to protect against the Turks. The building then became a town hall, and this happened approximately in 1503. This building was reconstructed several times: in 1608, 1662, and 1689. At the beginning of the 20th century, it was completely destroyed and replaced by a new building. Today the building has a baroque style. Also here is located Muzeul Județean de Istorie, and on the square, you can see another interesting museum – Casa Mureșenilor.
Best hotel choice for romantic escape, wedding or honeymoon in Brasov
When choosing a hotel for a romantic stay in Brasov, pay special attention to Hotel Ambient. The hotel occupies a stylish modern building with shining panoramic windows and a spectacularly …

Open
Strolling along Piata Unirii, next to Biserica Sfântul Nicolae, you can discover the treasure of history – Prima Scoala Romaneasca. This is the building where the first Romanian school was based. It is small, and among the exhibits, you can come across here are a printing press, school desks, chairs, and books – for example, the first printed Russian Bible. All the furnishing here is made in the old style. Another historical building is called Cetățuia de pe Strajă. During its time, it played an important role in the defense of the country. It was built in the early 15th century, was destroyed in 1618, but was completely restored a little later. Later, the building served as a warehouse, barracks, prison, and only in 1981 was it restored and became a historical monument. 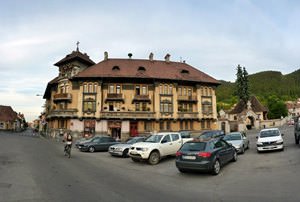 There is another fortification structure called Bastionul Postăvarilor. The building was constructed in the middle of the 15th century but was damaged in 1522. It was fortified only in 1962 and was restored in 2005. Going down the city, you can come across the Bastionul Funarilor. The bastion was built in 1416, but experienced several fires, and was restored only in 2006. One more fortification can be seen even further down; we are talking about Bastionul Țesă tililor. Its peculiarity is that it was preserved in its original form – it was spared by fires and military operations.
Shopping in Brasov - main shopping streets, outlets and boutiques
In Brasov, the most popular shops are concentrated on Republic street. Here, you'll find clothing and accessories stores of various price categories, some excellent bookstores and souvenir …

Open
There are other interesting religious landmarks in the city. For instance, the Catedrala Ortodoxa Adormirea Maicii Domnului is of interest from an architectural point of view. The building is renowned for its delightful facade. However, it is a sort of “hidden treasure”, since it is hidden behind the facades of nearby houses, and the location of the church can sometimes only be determined by the bell ringing. Biserica Sfânta Penticostala Treime is fascinating in that it was built in the Baroque style, and that it is beautified outwardly with charming frescoes. Mănăstirea Franciscană Sfânta treime does not captivate your attention at first sight, but inside you can discover a highly decorated altar and a spacious church. In general, people visit this place for the sake of the feeling they get from it – to be precise, harmony and serenity. There is also a synagogue in the city worth visiting.

In the section below, you can get one of our excursion, activities or city discovery tours over Brasov and surroundings. Our website offers 10-30% lower ticket prices, when compared to the offline purchase on the spot.

City tours, excursions and tickets in Brasov and surroundings

This guide to cultural sights Brasov is protected by the copyright law. You can re-publish this content with mandatory attribution: direct and active hyperlink to www.orangesmile.com.
Brasov - guide chapters 1 2 3 4 5 6 7 8 9 10 11 12 13
Reference information
Map of all palaces

Public palaces near Brasov
♥   Palace 'Pelisor' , 32 km from the center. On the map

To appreciate the diverse culture of Romania, it is worth visiting the Peles Castle, which absorbed the features of several architectural styles. Named after the nearby river, Peles was laid in 1873 and was built by different rulers for 10 years. Each of them tried to bring something of his own, so the Castle will delight tourists with knightly attributes and a huge library, 30 bathrooms and a lot of halls in different architectural styles, among them Florentine, Moorish and Turkish. The entrance to the Castle costs 20 Romanian Lei. Excursions are held from Tuesdays to Sundays, between 10 am and 4 pm. You can get to the Castle from Bucharest by train or from Brasov by bus to Sinai station. … Open

Photogallery of cultural heritage of Brasov

Excursions over cultural sights of neighbours of Brasov

Bucharest
The historical part of the city will be surely the most interesting for travelers as all most important architectural and historical sites are located here. Palace of Parliament is the most striking architectural monument of the city. This is a beautiful building that amazes guests by its size. Inside the palace are located as many as approximately six thousand rooms. The total ... Open »
Constanta
It takes more than one day of sightseeing to see all landmarks of Constanta. Lots of interesting historical sites are located at the waterfront, which is the starting point for many sightseeing tours. Here you can see models of ancient ships; a vast collection covers a wide historical period from ancient Greece to the late Middle Ages. Near the waterfront there are lots of ... Open »
Chisinau
The most interesting place for visitors is historic district, as all major attractions and sightseeing objects are here. Chisinau’s important symbol is the Organ Hall located next to the largest and most beautiful square of the city. Great National Assembly Square has been completely renovated recently, and today it is the site of all major public events and holidays. At the ... Open »
Balchik
Balchik Art Gallery welcomes all fans of fine arts. Its opening took place back in the 30s of the last century, but many valuables were taken out of the gallery by the end of the Romanian occupation. The gallery was reopened in 1965. The ground floor of the building is occupied by collections of foreign artists’ works. On the next floor, you can see the works of the most ... Open »
Golden Sands
Golden Sands is an internationally famous beach resort. In addition to a variety of entertainment this place offers tourists to enjoy exciting sightseeing to various historical sites. Holy Trinity Monastery is known as the most famous ancient monument that should be definitely visited by every traveler. The monastery is often referred to as Aladzha, and this term can be ... Open »
Timisoara
One of the most interesting cultural institutions of the city is the Banat Village Museum. The museum is a massive cultural open air complex; its main exhibits are old farm buildings, their age is about a hundred years. Beautiful pottery and wooden cabins were moved to the museum from various suburbs. The museum often hosts exciting recreational activities for guests. Visitors ... Open »

Culture guide to Brasov. Which fascinating sights to visit once you are in Brasov: temples, churches, museums, theaters and castles. Recommendations (with addresses, phone numbers and links) on the places 'must visit' in Brasov. Plan your own city excursion by using this page info!