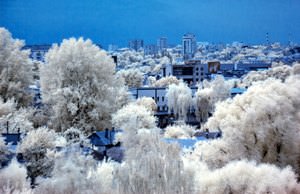 In Vinnitsa, many competitions, original exhibitions and colorful youth festivals take place every year. With the participation of youth organizations, very symbolic and beautiful activities are organized in the city, recently a good tradition has been the ornamentation of trees in the city center with the flags of sister cities. Walking in the center, you can see fluttering flags of different cities, including Kielce (Poland), Birmingham (Great Britain), Peterborough (England), Bursa (Turkey), Lipetsk (Russia) and Ribnita (Moldova).
Cuisine of Vinnytsya for gourmet with top restaurants and cafe
Many travelers who come to Vinnitsa are eager to try the dishes of real Ukrainian cuisine; there are more than enough attractive national restaurants in the city. First and foremost, …

Open
It is youth festivals that make up a significant part of the cultural calendar of the city. They are devoted to a wide variety of topics and unique; in 2013 the festival "HobbyFEST" was held for the first time in the city. As you can guess by the name, the festival is devoted to diverse hobby; people with different hobbies took part in it. The place of the celebration was one of the famous city hotels. For several days in specially equipped halls master classes on different types of creativity and interesting exhibitions were held. The organizers of the festival were local youth organizations. The festival was very successful and added to the already rich cultural calendar of Vinnitsa.
Melomanov in the picturesque Ukrainian city attracts another bright event - the WOODSTOCK festival. This musical festival is well-known to the inhabitants of European countries, and for the first time it was held in Woodstock in 1968. Vinnitsa was the first to hold the music festival in 2012, since then it was decided that this bright musical event be held here every year. Performers and musical groups from different countries of Europe take part in the festival; especially for large-scale events in the city, they equipped a huge open-air stage. Tourists, who are not indifferent to music, should go on vacation in Vinnitsa in late August. Copyright www.orangesmile.com
Excursion over cultural sights of Vinnytsya - 'must visit' points of interest
First and foremost, in Vinnitsa you need to look at the Arch in the Central Park of Culture and Leisure named after Gorky, as well as a fire tower located in the park named after Kozitsky. …

Open
Vinnitsa is a tolerant city, where there is place for any religion. It is often visited by Islamic scholars from Egypt and Saudi Arabia, here they jointly read prayers, and teach local Muslims to read the Holy Quran. Travelers who visit Vinnitsa will be pleasantly surprised by the friendly attitude of locals and their respectful attitude to the cultures and traditions of other countries. Here, every tourist will feel welcome.

This guide to traditions and festivals in Vinnytsya is protected by the copyright law. You can re-publish this content with mandatory attribution: direct and active hyperlink to www.orangesmile.com.
Vinnytsya - guide chapters 1 2 3 4 5 6

The fig sign, that is, the thumb pushed through the index and middle fingers of the hand folded into a fist, is a rather rude gesture, though it is inferior in terms of level of rudeness to an elongated middle finger. It is considered indecent to point a finger at people or objects, for this they rather use all five fingers. Ukrainians are superstitious, which is why they avoid taking out the garbage in the evening, shaking hands and communicating at the doorstep, leaving empty bottles on the table. All these, according to beliefs, can lead to bad luck and misfortunes. It is forbidden to whistle indoors, especially in a residential area, in order not to be left without money. Spilled salt can lead to a quarrel, as well as the presentation of knives, scissors, and other sharp objects as gifts. … Open

Colors of Vinnytsya in photos

Traditions and festivals in cities around Vinnytsya

Kiev
No less interesting is the entertainment dedicated to arts and creativity. More than 30 years ago, the city began holding the so-called “vernissages” - art exhibitions, which have been held on Kyiv Day to this day. The best masters of the city present their masterpieces, any of which can be bought. Hand-embroidered aprons and colorful bedspreads, original handmade hats ... Open »
Chisinau
The names of some local dishes may seem very complicated to foreign tourists, but the manner of cooking is quite simple. Every holiday ‘moldovenesht’, which stands for mixed vegetables wrapped in cabbage leaves or minced meat stewed in vegetable broth, is served. The homemade cheese – brynza - is always present on a table. Wine has remained the main celebratory drink for ... Open »
Lviv
Annually the city of Lvov is visited by thousands of beer fans. During the Annual City Beer Festival anybody gets a chance not only to try the best sorts of beer but to find out the secrets of its brewing. Within the event great many of exhibitions, lectures and master-classes are held. Expert brewers eagerly share their experience with the public. Another exciting national ... Open »
Odessa
Gastronomy part of the festival deserves special attention of tourists. The Prymorsky Boulevard is a favorite destination of gastronomy tourism enthusiasts during the festival as this is exactly the place of holding numerous culinary shows, master classes and fairs dedicated to ethic cuisine. The same interesting national holiday is the Independence Day which is celebrated on ... Open »
Brasov
The greatest value in the life of local residents is the family, all parents want to give children an excellent education and wish them the best, including the wish for their success, of course. Self-realization in society is one of the main goals of local residents. And, of course, they, as true representatives of the southern mentality, want to work less, while earning more ... Open »
Lublin
For several days, Lublin Old Town comes alive in the truest sense of the word. Here you can meet locals dressed in beautiful national costumes, visit craft workshops, take part in interesting entertainments and try dishes prepared according to old recipes. The tradition of holding fairs was born in the city in the 15th century when Lublin was one of the largest trading towns ... Open »

Cityguide on traditions, mentality and lifestyle of people in Vinnytsya. Learn the best periods to visit Vinnytsya to discover its soul - authentic festivals, events and celebrations. We will also reveal the interesting habits, attitude towards the world and to tourists in Vinnytsya.